This weekend, I was at BiCon 2009 (my third BiCon – I guess that makes it a tradition), and it was awesome. Here’s a short summary of the highs and lows:

Worcester’s closer than I remembered, and – once Claire‘d gotten used to the Vauxhall Astra we’d rented – we made good time there and back. It’s a really simple journey, really – you just drive along the A44 until you get there, and then you stop (well, okay, there’s a brief stretch on the A470 near Rhayader, but that doesn’t really count, does it?). The biggest difficulty we had was on the University of Worcester campus itself, which is a maze of twisty little passageways, all alike. 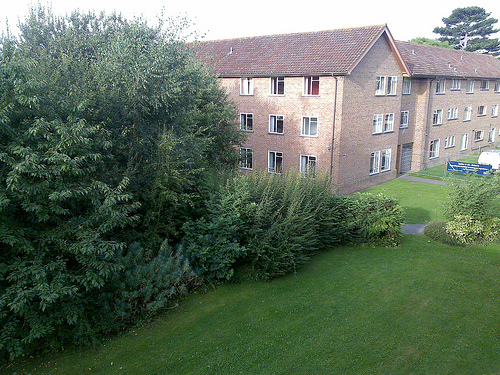 The usual student halls affair, although with rooms far larger and kitchens far better-equipped than those in, say, Penbryn. Also, the organisers must have run out of regular rooms, because the flat Claire and I were in had en-suite rooms, which was an unexpected luxury.

An interesting quirk in the halls of residence at Worcester is that they’re very, very keen on motion-sensor-activated lighting with very short timers. The lights in the hallway outside my room would come on for barely seconds, and when I first checked in, I’d only just worked out which was my door and dug my key out of my pocket before I was plunged into darkness and had to leap around to get the attention of the sensor and get the lights back on. The one in the kitchen was even worse – while playing board games on the first night, we eventually grabbed an anglepoise lamp from one of the study bedrooms to use, as it was simply too frustrating to begin your turn right as the lights turn off, and have to wait for a few seconds until your movement is enough to turn them back on again.

On the other extreme, the light (and the – noisy – linked extractor fan) in my bathroom was so sensitive that it would turn on if I so little as walked outside the door to my bathroom, while it was closed, and often wouldn’t turn off for several hours.

Registration was the usual fun and games, with less time than usual setting up our badges in accordance with the “sticker code” (sort of a handkerchief code, but with a key and an atmosphere of being a little more playful). As usual the sticker code started small (and, unusually, with a distinct and separate “official” code) and expanded over the course of the weekend, such that by the end of the conference it looked like this: 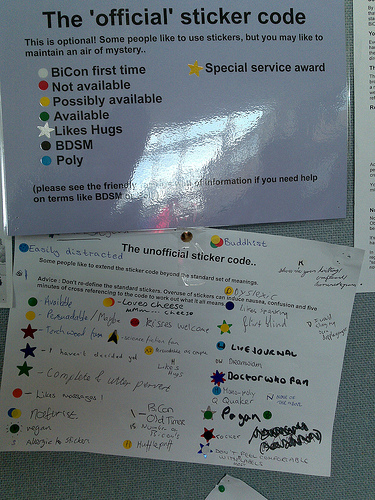 I didn’t spend very long on my badge and stickers this year: just enough to get a core message across… plus a not-on-the-key “Q scrabble tile”, as a reference both to being a board gamer and to Claire and I’s unusual surname. There’s probably at least half a dozen others I could have legitimately added to my pass. 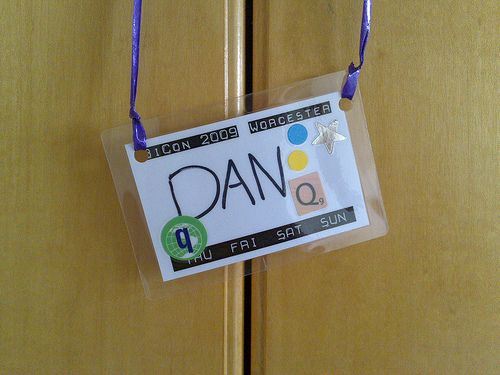 To save you squinting at the pictures (or clicking on them to see bigger ones: that’s allowed, too), I’ll decode my badge for you: polyamorous, likes hugs, possibly available (as in: I’m theoretically open to new relationships, but seriously – where would I find the time?), and the aforementioned “Q scrabble tile” and another “Q” that I found in the sticker stash.

Claire volunteered for a shift of reception desk duties, which is cool, because they’re always in need of more folks there.

I didn’t go to as many workshops as I have in previous years: many of the things I was interested in clashed with one another, and other slots were simply full of topics that didn’t catch my attention. Also, I’ve found that going to a workshop in “every other” timeslot is a perfectly good way to get by, and spending the alternating periods hanging out, meeting people, and playing board games is a great way to keep energy levels up in the otherwise quite draining busy-ness of BiCon.

This year was the first year that I ran a workshop (last year’s impromptu purity test party doesn’t count), and, because I like a challenge, I ran two:

The theme of the BiCon Ball was Crime and Punishment, and so there were – predictably – plenty of burglars with swag-bags, police officers, superheroes and villains, and the like. The standard of body-painting was even better than normal (a number of people opted to wear virtually nothing, instead being painted as, for example, Wonderwoman, who didn’t wear much to begin with).

Just to be that little bit different – and to take a metaphor to it’s illogical extreme in our characteristic manner – Claire and I decided to actually dress as a crime itself. She dressed as a salt shaker and I dressed as a Duracell D-Cell, and together we were… a salt and battery. Get it? Everybody else we spoke to that evening did, too, eventually, although many of them needed some prompting. 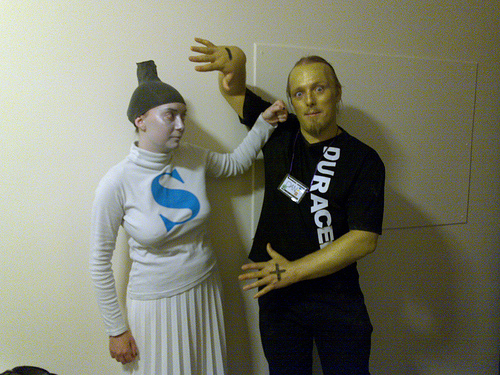 Other highlights and notable moments include:

Right; that’ll have to do for a BiCon 2009 Roundup, because Ruth‘s cooking me dinner so I need to go eat.

Ashes to Ashes (The Funeral of Peter Huntley)

Dan's dad's funeral was this Friday. Here, he provides photos, videos, and a write-up of what turned out to be…

Spent last night on the beach with Andy, Alec, Paul, Claire, and others last night. Folks like Andy and Alec…

500 Internal Server Error (minxylydia.com) false There aren’t many great things to write about Hounslow, other than me being in…