Well, Paul‘s mid-Troma Night fire was still on, so after watching The Wicker Man we all raided the nature reserve for wood, raided the filling station for petrol (mmm… accelerant) and went and set up on the beach.

Hollywood Pizza were good enough to bring us our pizza on the beach, which was awfully nice of them, but the damp conditions made lighting the fire hard. It’d just started to char the wood when it went out, and, too impatient to wait for somebody competent to go and help him, Paul decided that he’d have a go at putting a little more petrol onto it.

He doesn’t seem to have the knack of it. Here’s a visual guide. 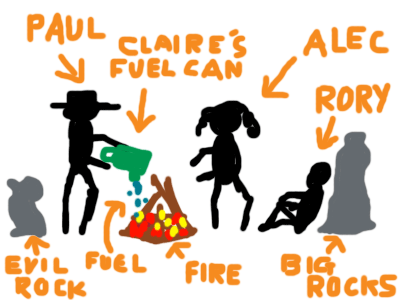 Experts at “pouring petrol onto fires” (e.g. Jimmy or me) will immediately see Paul’s mistake in the first frame. Not only is he badly-drawn, but he’s holding the jerry can upside down over the naked flames. The correct approach is to swing the can in order to “throw” petrol onto it, and even that is assuming that you rule out the *real* correct approaches of never putting petrol on a lit fire or never trying to use petrol as an accelerant to a bonfire in the first place. 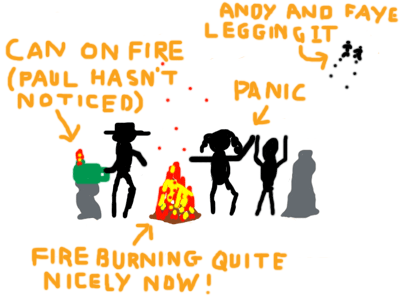 The inevitable occured, and the petrol can caught fire in Paul’s hands. It took him some time to realise this, however, despite everybody else standing and shouting at him. He calmly and carefully put the can down on a rock before looking down and seeing that it was ablaze.

At this point, the correct course of action would be to attempt to extinguish the flaming can of fuel before it got out of control: perhaps by throwing something over it or by moving it into the sea. But what Paul did was… 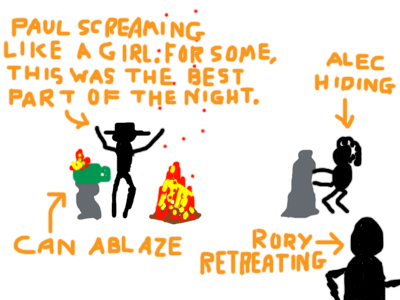 …screamed like a girl. Many of the spectators ran for cover (many of them under the delusion that an open plastic petrol can with a flame burning the gas above it [like a wick] was in some great risk of exploding): Alec hid behind some rocks further down the beach while Paul was still trying to work out what he should do. 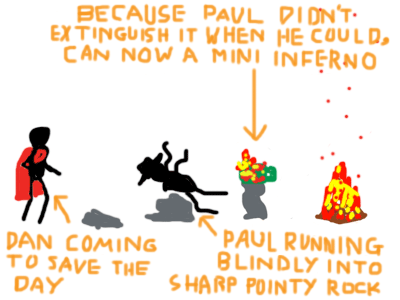 Paul’s master plan was to run blindly towards a number of sharp, knee-high, wet, slippery rocks. This had two effects. Firstly, it put a significant distance between himself and the petrol can which he should have been extinguishing, as the time in which it was safe to do so was growing short. Secondly, it caused him to fall badly onto his leg and injure it, tearing a reasonable-sided chunk of flesh away from him.

Meanwhile, I started to walk towards the can to try to get it moved into the sea and thereby put out the fire – the plan being that I might be able to salvage some of the petrol and make our bonfire more sustainable with it. 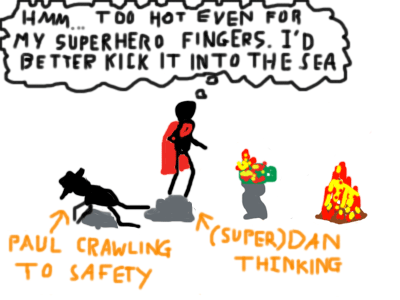 That’s me, wearing the cape like the superhero I am. I wasn’t actually wearing a cape, but I probably should have been. As I approached the can I saw that it was already too late to pick it up – the petrol vapours were being heated by the flame and were escaping the neck of the container and licking around the handle, so I opted to kick it as hard as I could towards the awaiting ocean. 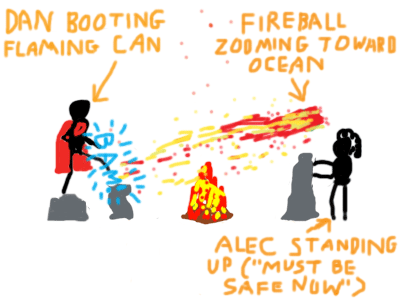 It was at about this point that Alec popped his head out from behind the rock to see if the coast was clear. The petrol can narrowly missed his head as it flew past him – by this point, just a ball of fire. It fell short of the sea, and it took until a few waves had broken over it a couple of minutes later before it was extinguished, but it was too late: the petrol had already burned it’s way out through the bottom of the can, and our fuel was gone.

If you have photos from the night, please upload them to The Wicker Man gallery on Abnib Gallery. Paul’s particularly interested in getting hold of the photos that were taken of his injured leg.

4 replies to Of Unusual Troma Nights

So You Want To Start An Unpopular Blog

A fellow unpopular blogger shares the secret of their lack of success, with commentary from Dan.

[this post was damaged during a server failure on Sunday 11th July 2004, and it has not been possible to…