There’s lots of ugliness in the world right now, so I think it’s important to share these photos of what happened when my friend Marvin called me & said: “I’m getting married & we can only invite 100 people. You didn’t make the cut. But you can come if you come as a drunk clown.” 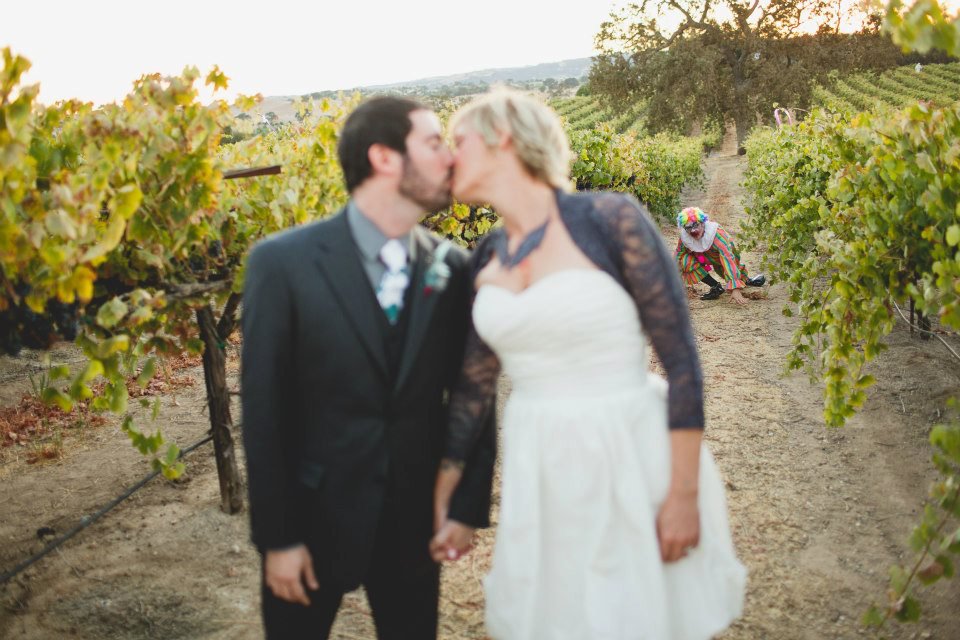 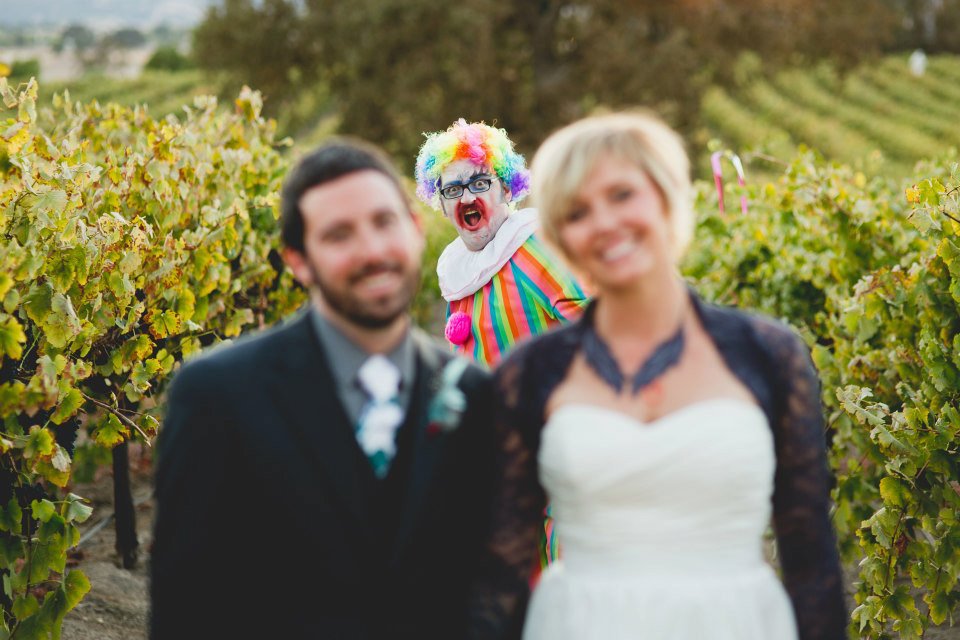 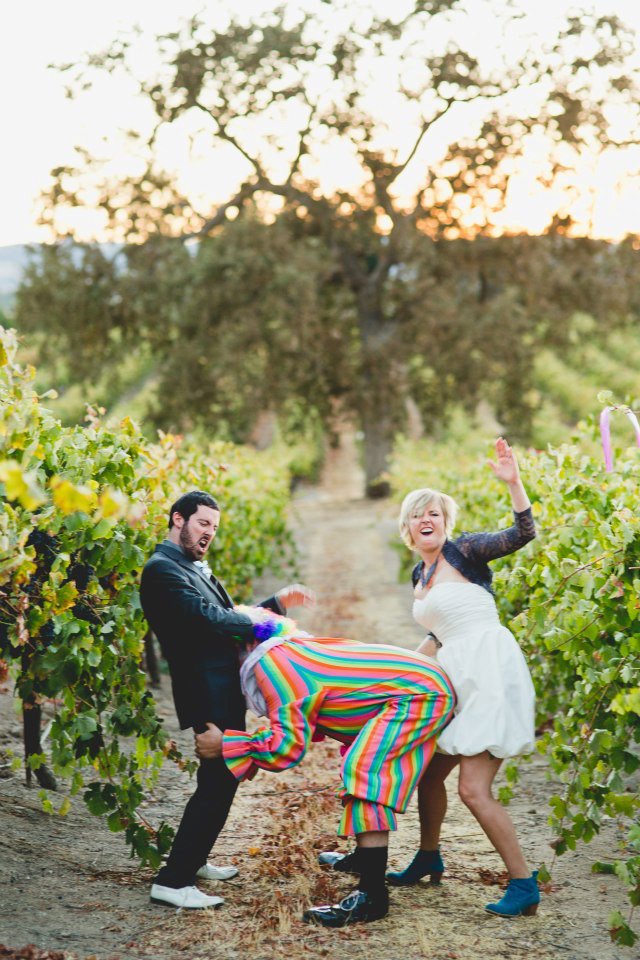 (1) There’s not a lot of story to tell, but for anyone who wants some DRUNK CLOWN AT THE WEDDING backstory:

Marvin had a vision of a drunk clown crashing his wedding. It’s all he ever wanted. Laura was on board. That’s the kind of perfect-for-each-other weirdos they are. 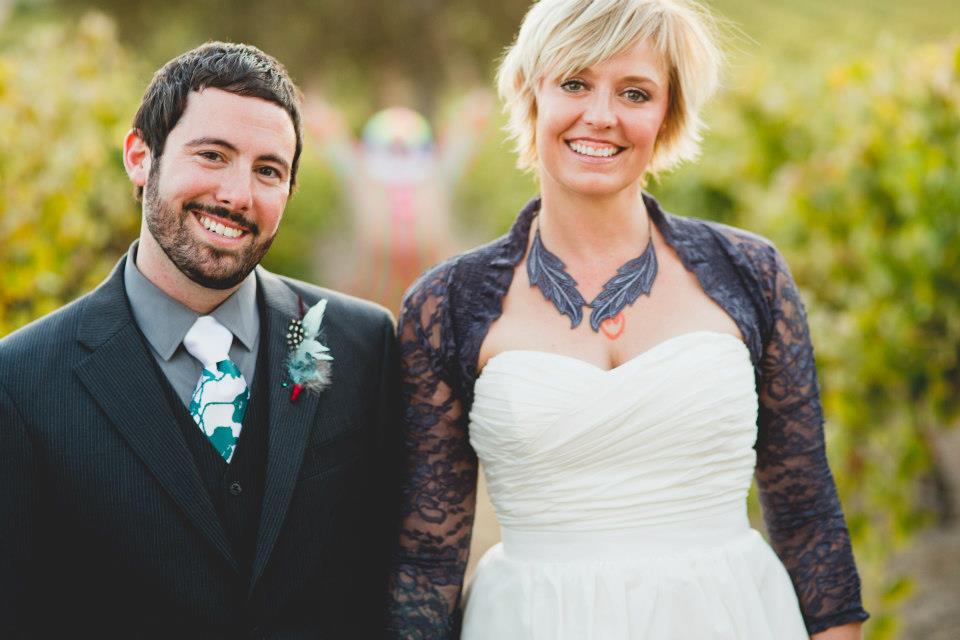 (2) I arrived in a regular suit. I had the clown outfit, face paint, shavingg stuff (I had a full beard & needed to shave for the make-up) and two 40oz’s (Marvin asked for a drunk clown, so I was giving him a D*R*U*N*K clown) in a bag I hid in a bathroom next to the ceremony.

(3) I only knew a handful of people at the wedding. Didn’t know Marvin or Laura’s families. More importantly, they didn’t know me. Which made me the perfect surprise drunk clown. 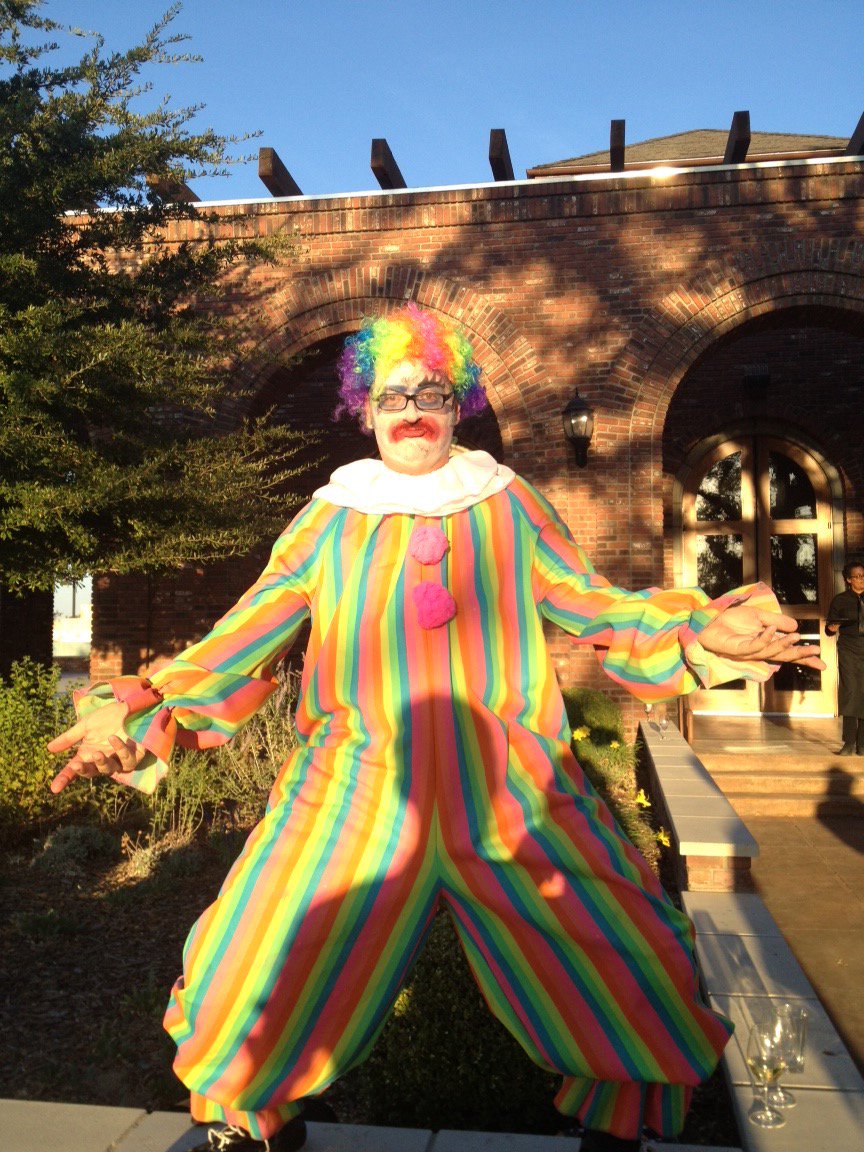 (4) I didn’t want them to recognize me when I showed up as a clown — the idea was to make it feel like an actual drunk clown had crashed the festivities — so I didn’t mingle much. 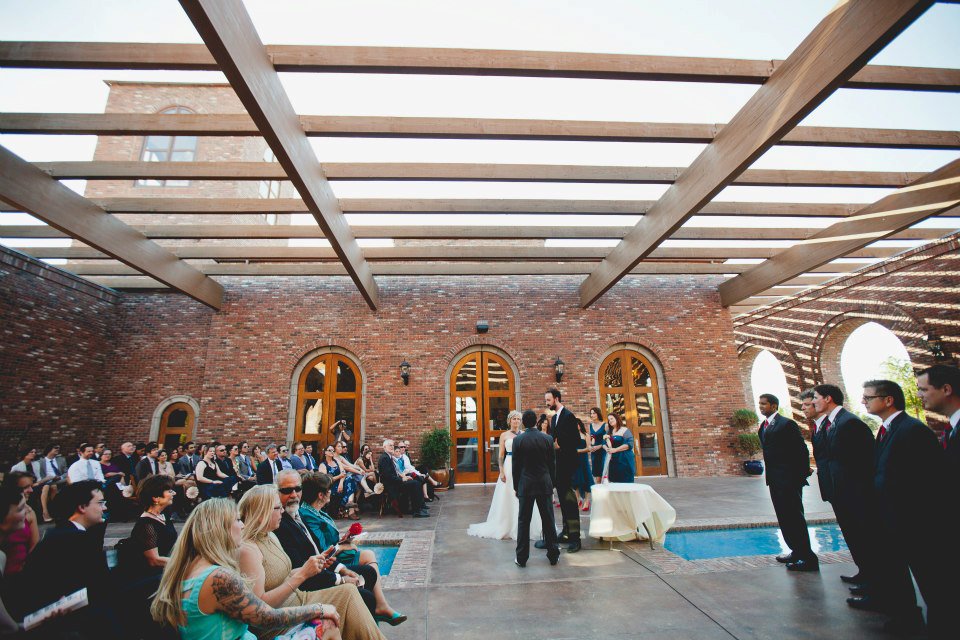 (5) As soon as the ceremony was over, people were directed to another area for a wine reception. I slipped away to the bathroom with @AimieRocks, who was helping with my make-up. I shaved off the beard, did my face, got into the clown suit, and pounded one of the 40oz’s. 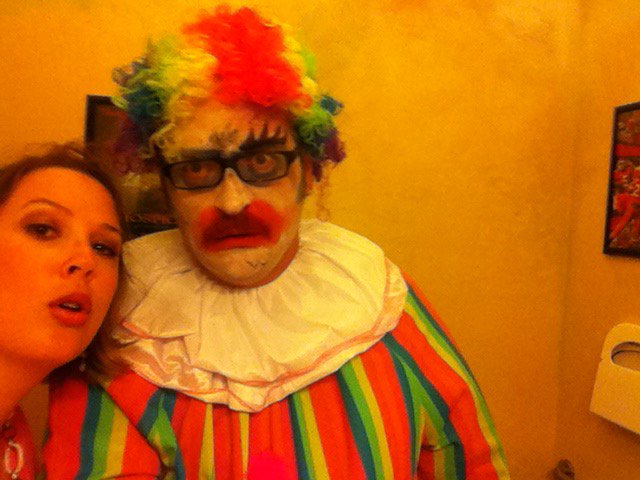 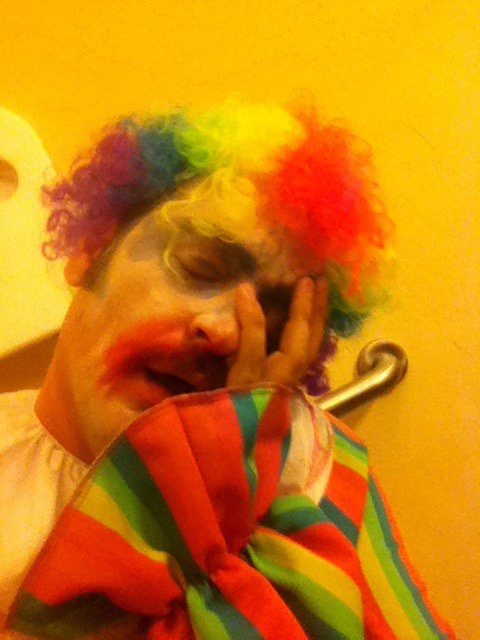 Total lightweight here. I was hammered pretty quickly. I’m a method actor, so I drank half the other 40oz too. Then I stumbled over to the wine reception. 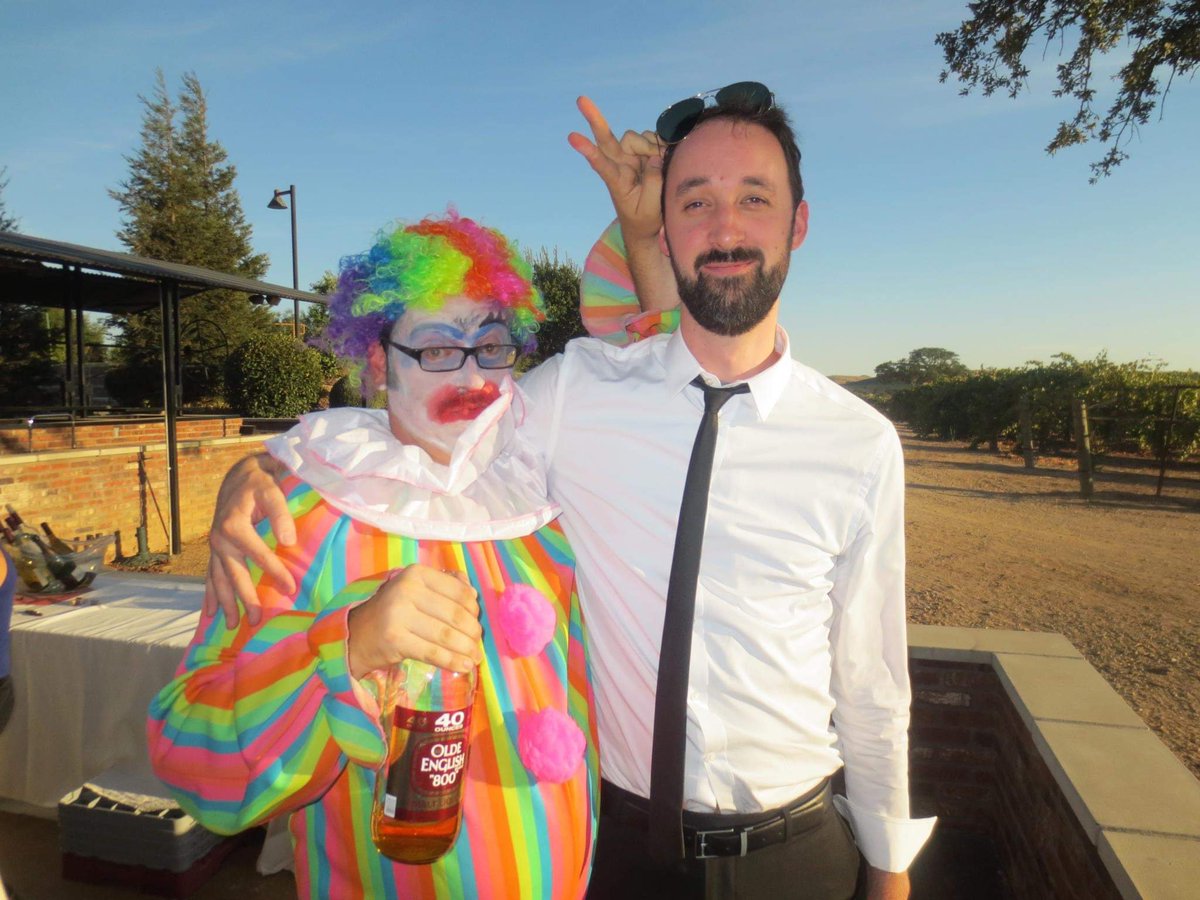 (7) I barged in, marched over to Laura’s mom, grabbed her wine, downed it, then handed the empty glass back to her. CONFUSION. MILD CHAOS.

WHO IS THIS DRUNK CLOWN? 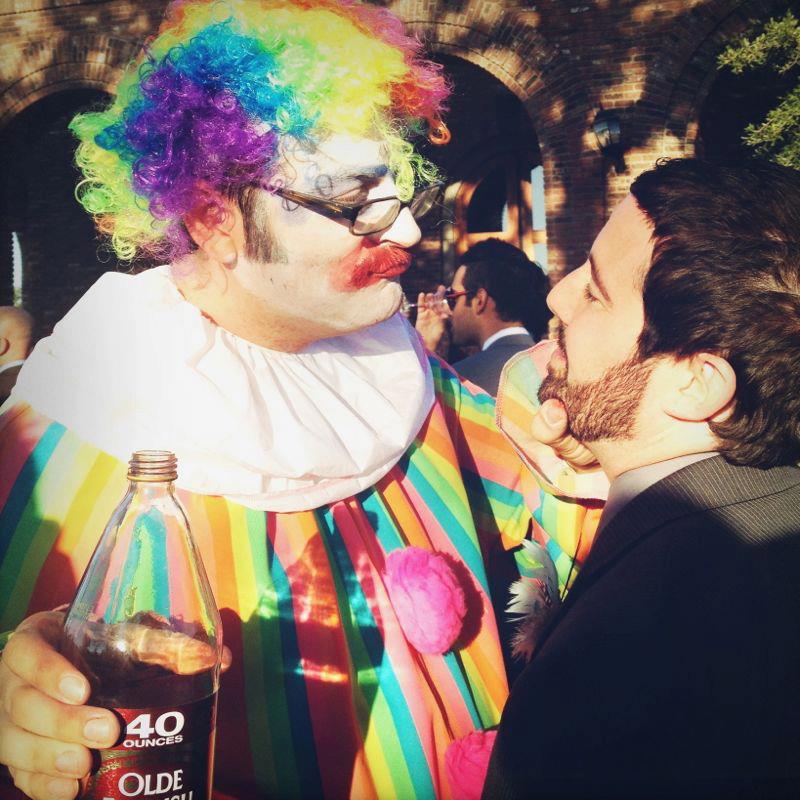 (8) I accidentally shattered a few wine glasses, but I gotta say I brought a real JOVIAL DRUNK CLOWN vibe to the whole affair, so people embraced me pretty quickly, even though I kept drinking their wine.
(9) Except for Laura’s dad, who called for security to escort me out. She had to tell him that I was AN OFFICIAL MEMBER OF THE WEDDING PARTY.

(10) At some point, we must have gone into the vineyard to take those photos in the original tweet up above, but honestly I was so drunk that I don’t remember taking them.

Anyway, I told you there wasn’t much backstory. It was an awesome wedding. <end>

ADDENDUM: just found this photo & it made me laugh. This is after security was called off, after everyone found out I wasn’t a DRUNK CLOWN STRANGER but a DRUNK CLOWN FRIEND. And everyone’s just…so…completely…CHILL. Just like, “whatevs,” as I drink more. 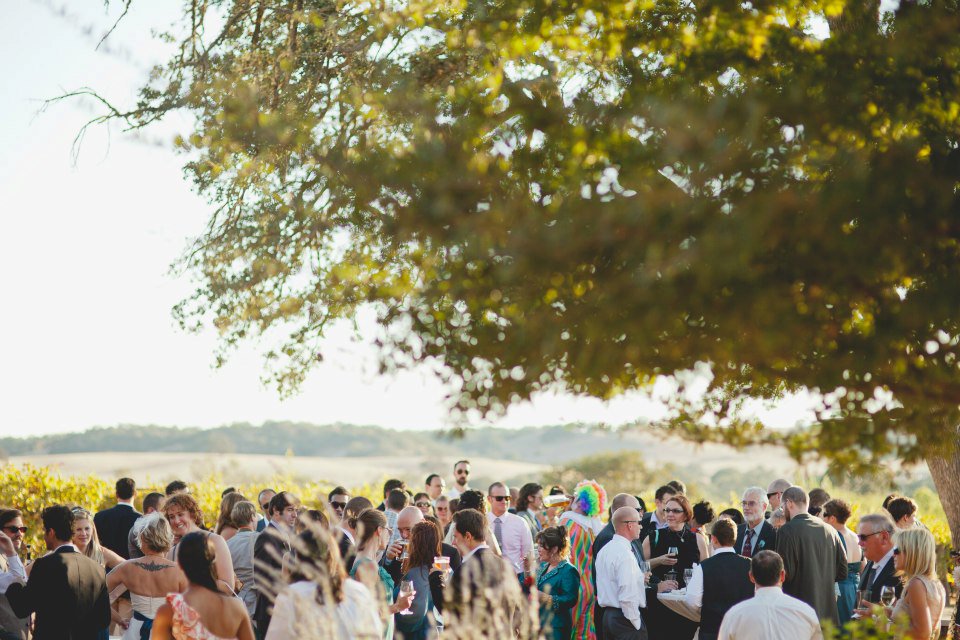 (12) OMG okay so I guess I have to make a SECOND ADDENDUM because @AimieRocks just emailed me some more photos from the wedding. Adding them to this thread…
(13) What I wore to the wedding ceremony. (That’s not my hat, that’s @AimieRocks‘s hat, I’m *not* a hat person but wearing it made me feel like Diane Keaton.) Posting these photos so you can see the beard I had before my clown transformation. I shaved that thing off SO QUICKLY. 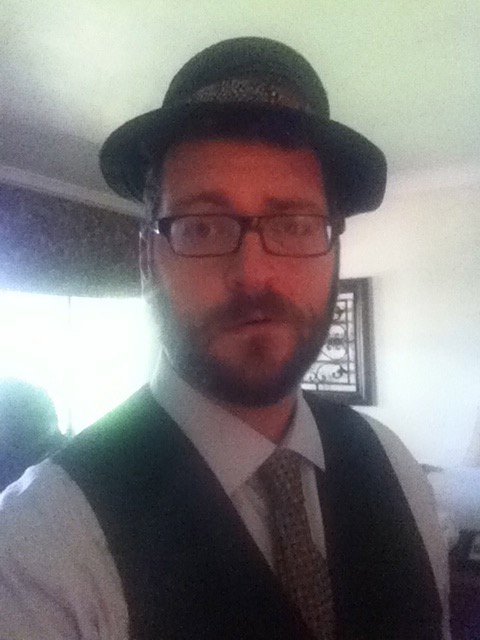 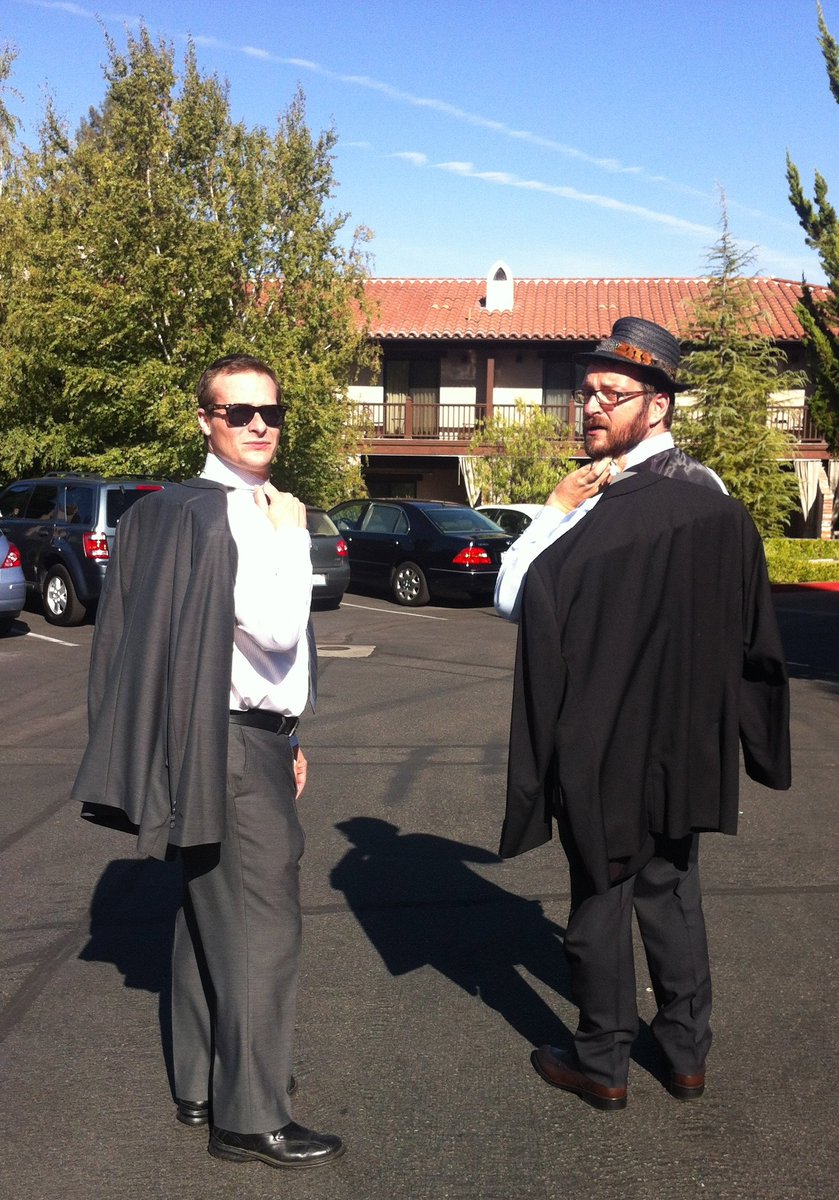 (14) DRUNK WEDDING CLOWN, A PORTRAIT. I hate beer so much, but I had to get in character and I feel like drunk wedding clowns drink beer??? I’ve barely had any of the beer and already a little drunk in this photo. We didn’t leave the bathroom until after I finished that bottle. 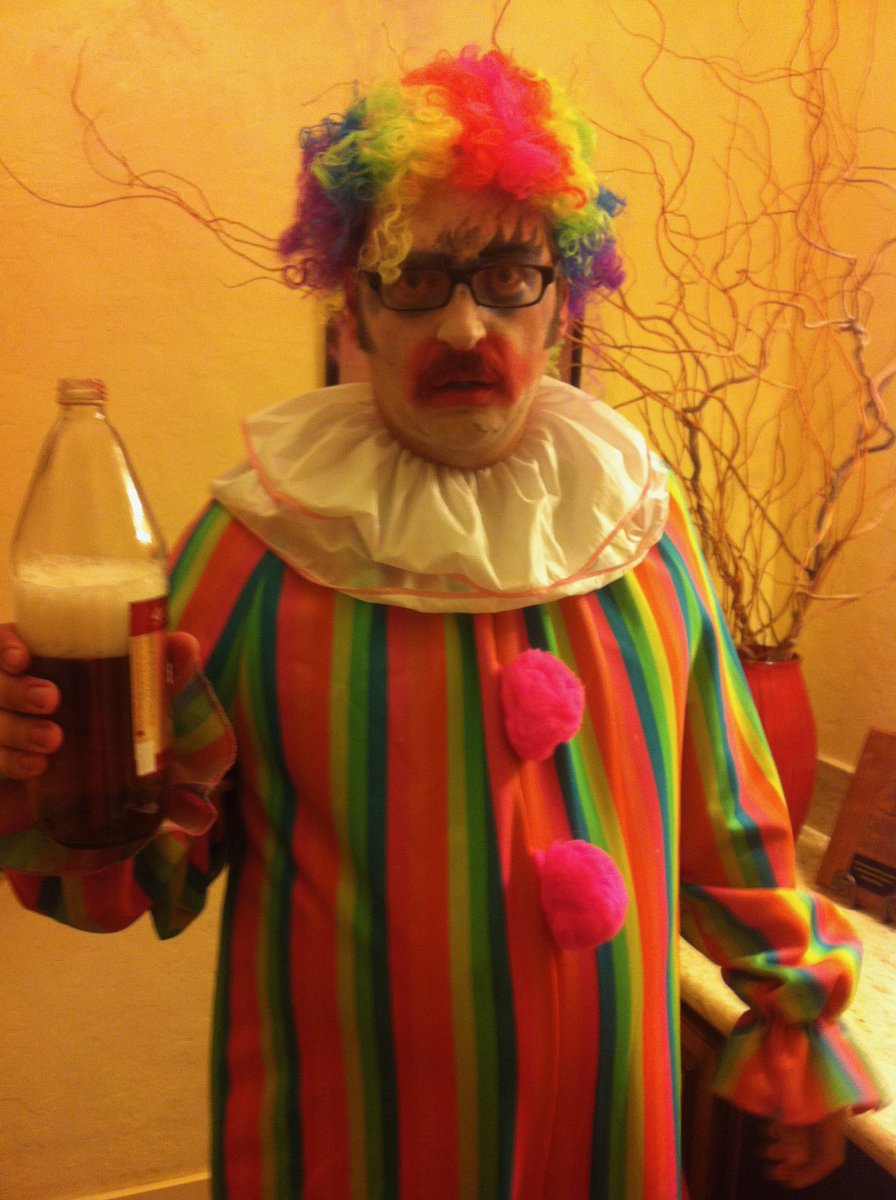 (15) Last three photos. I love how Laura’s pretending not to know me in that first one. The kissing photo is with another good college friend, Michal. I have no idea who I’m talking to in that third photo. <end addendum> xx 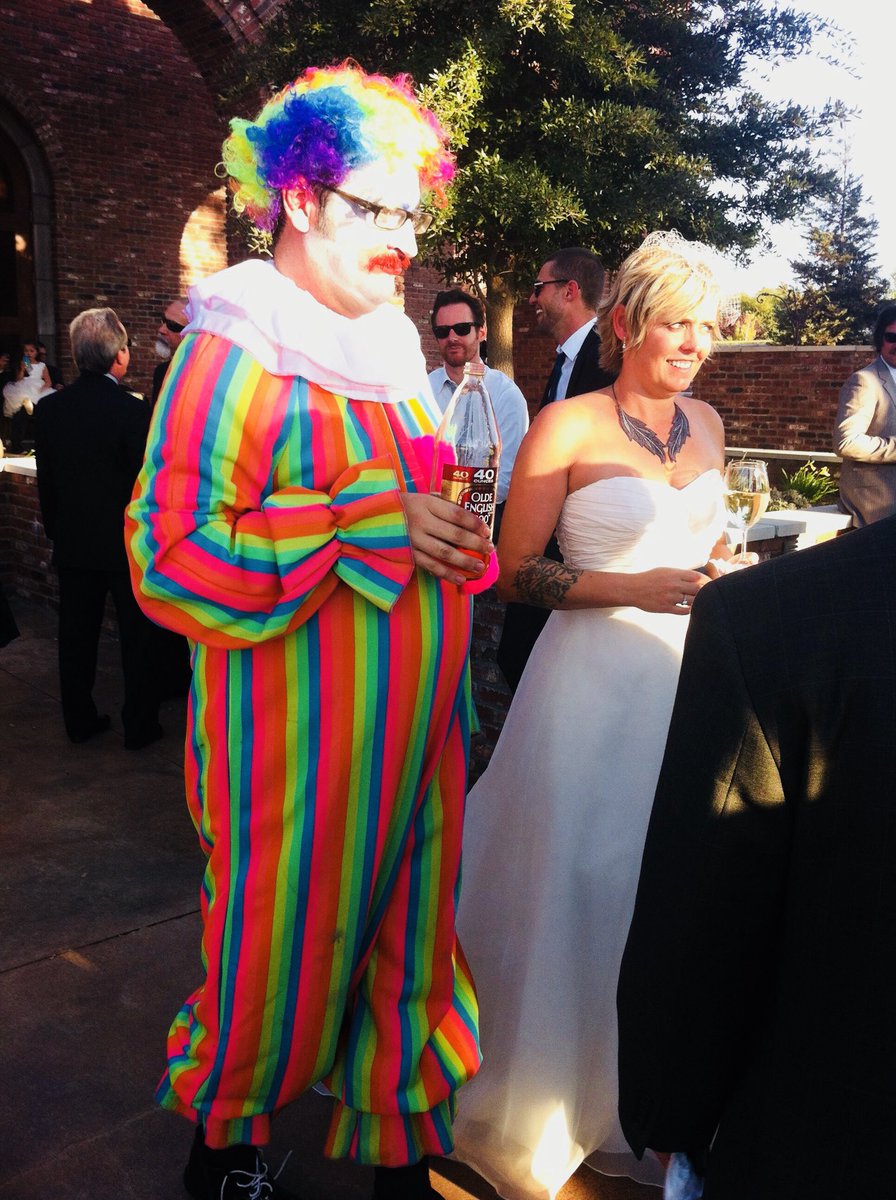 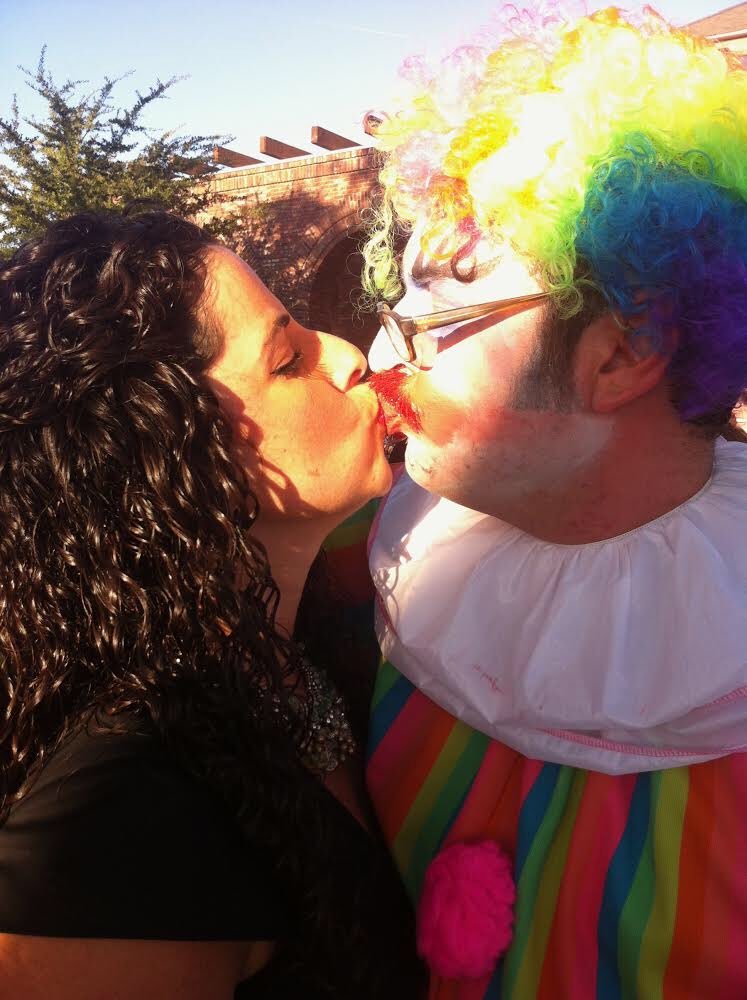 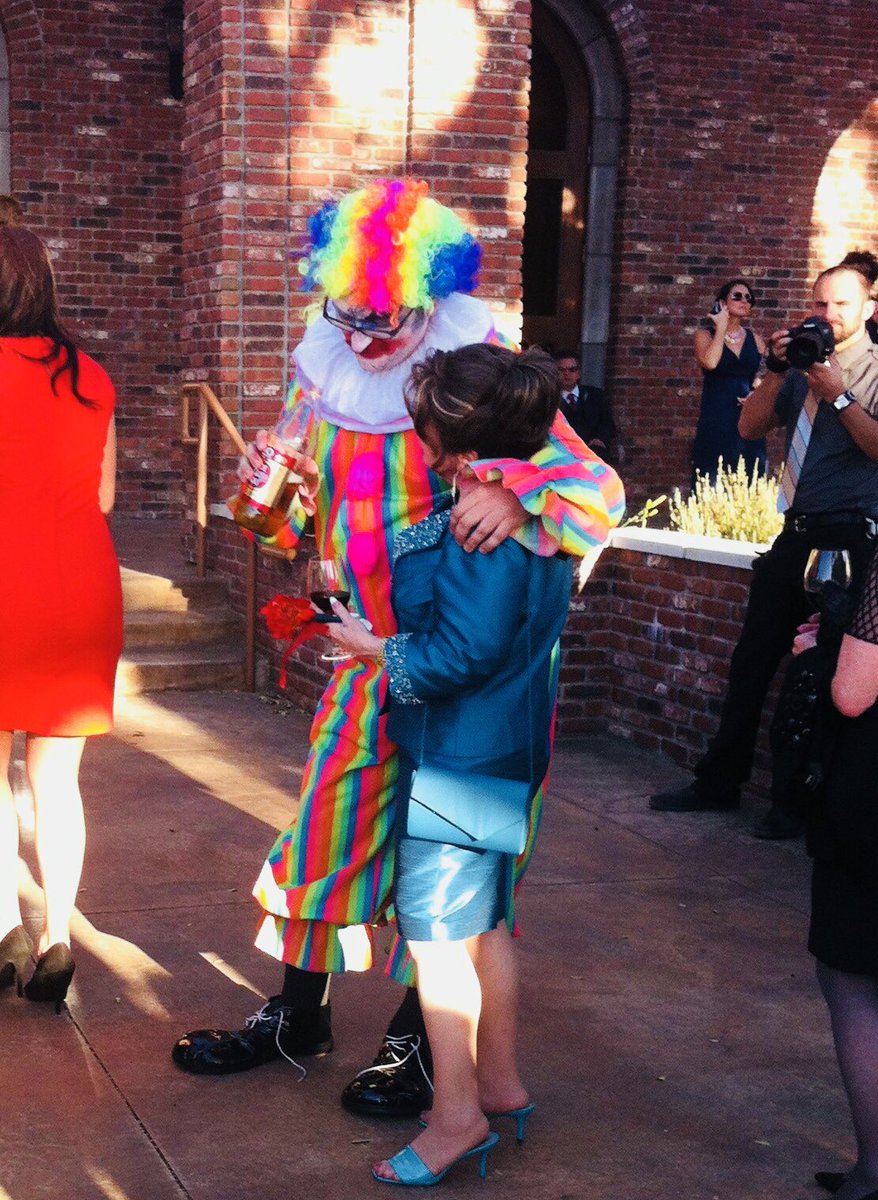 Marvin just joined twitter to tell me that’s his mom I’m hugging in the third photo in this tweet. I’M SORRY, MARVIN. But welcome to twitter. xo

(17) ADDENDUM #3: @MarvinSolomon8 just texted me the name of their wedding photographer. Shoutout to SAMUEL POTTER PHOTOGRAPHY in Paso Robles. Here’s his website: Samuel Potter Photography Samuel Potter is a professional wedding photographer in San Luis Obispo with a modern style and eye for emotion. http://www.samuelpotter.com/

He took the three vineyard photos & obviously has a great eye. THANK YOU SAMUEL POTTER.

I was at a party this afternoon and an old friend introduced me to his wife, then told her: “honey, this is the drunk clown I told you about.”
Someone messaged me asking if they could interview me about the drunk clown stuff for a TV show & we’re about to skype. I texted my mom and asked “how do I look?” This is her reply. WHAT DOES THIS EVEN MEAN??? IS THAT A GOOD THING OR A BAD THING??? WHAT ARE YOU TELLING ME, MOM??? 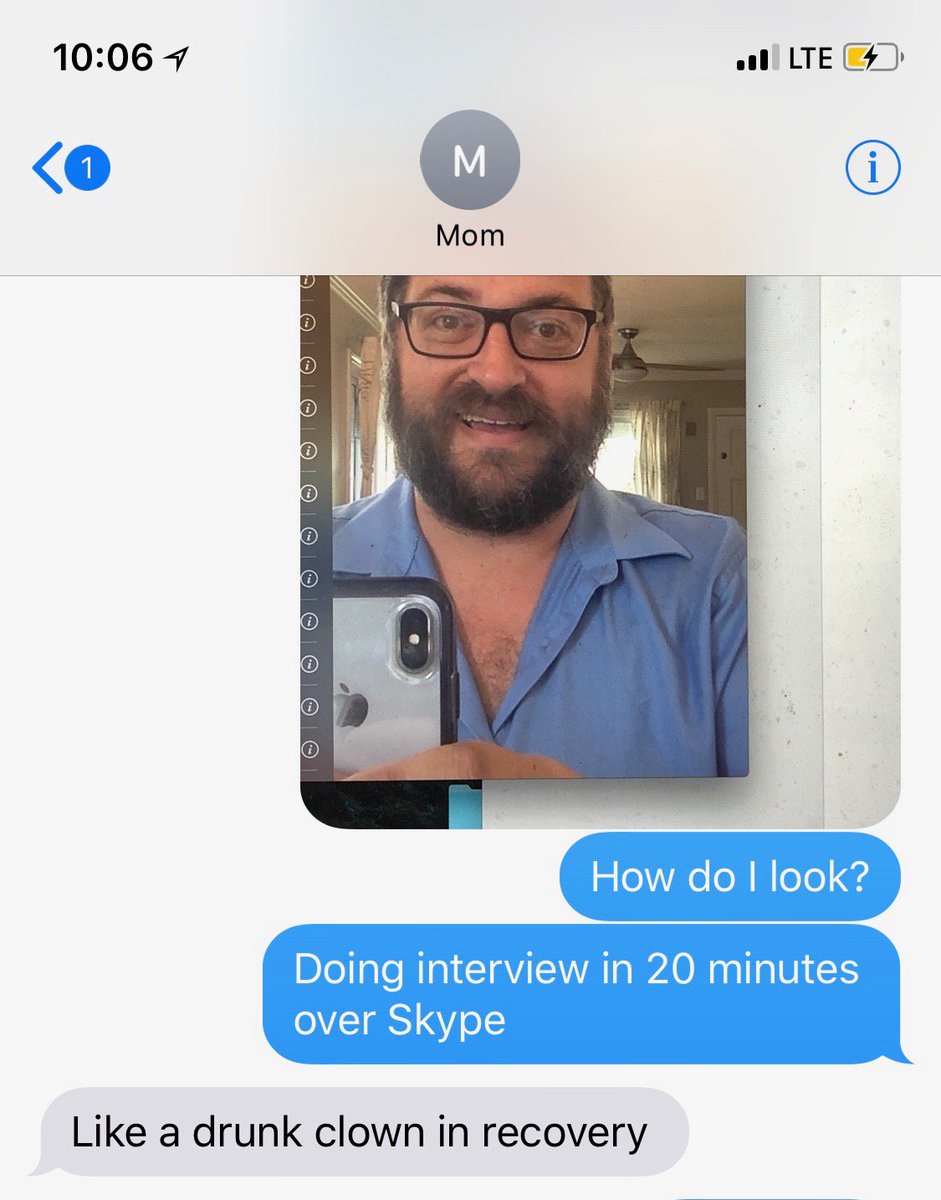 My grandma’s been in the hospital with bad shingles & infection. It’s been a scary, stressful week, & she’s been in bad pain. But she’s getting A LOT better. And thankfully she just got moved to rehab facility.

My mom just texted me this photo she took of grandma’s new room. 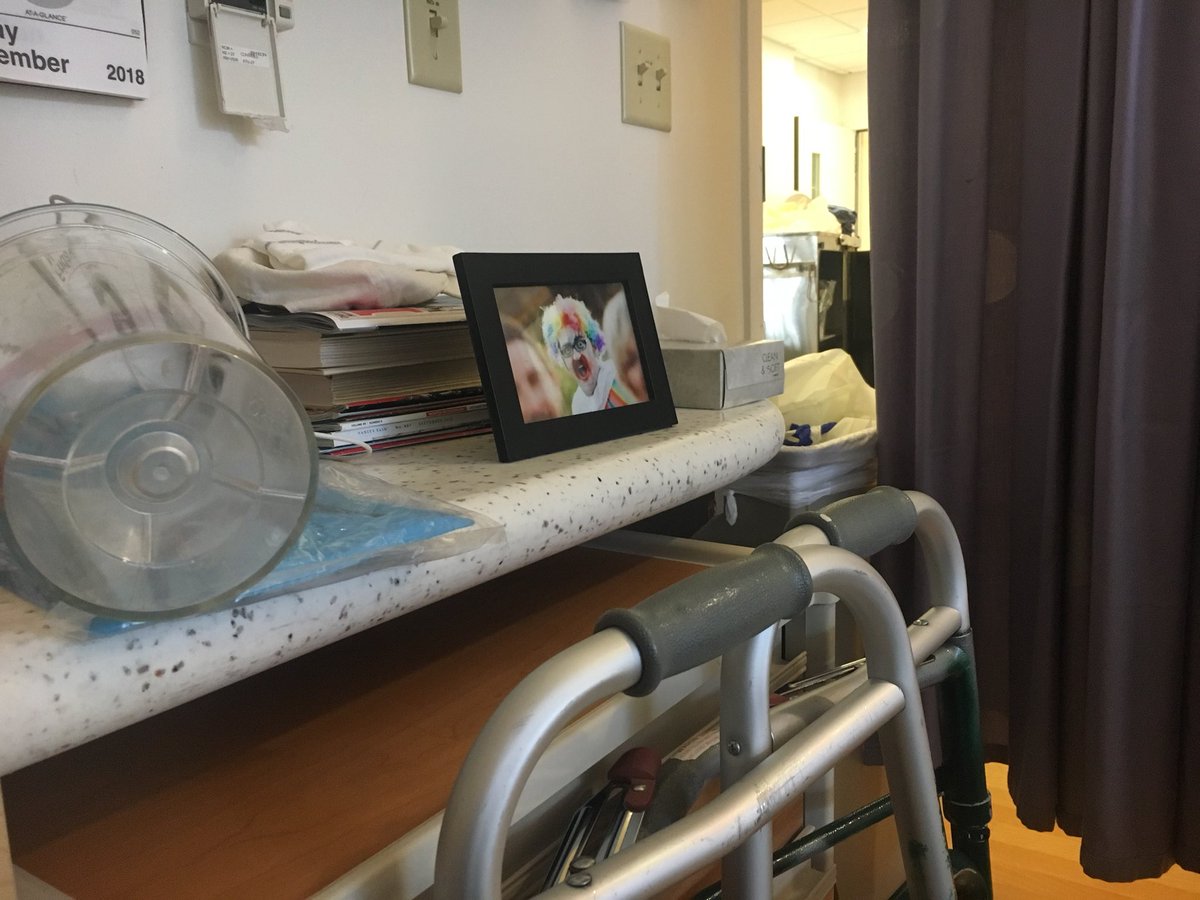 A friend just texted that he’s showing these drunk wedding clown photos to his family tomorrow and I hope it brings them all closer together.

Dan puts his foot in his mouth, and makes it sound like he was considering putting his boss's new pet…

After a few motorway service station visits, Dan wonders how to drink alcohol in a parallel dimension, and whether its…

Are You Ready to Have Friends with Kids?

Are You Ready to Have Friends with Kids? (The New Yorker) Once you have friends with kids, your life is…