The edge of a field, south of Buckingham. 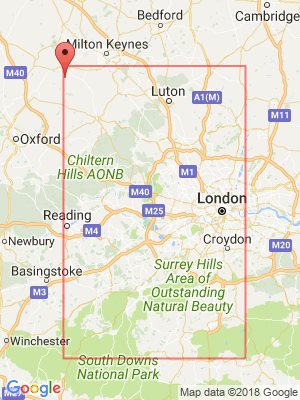 To commemorate the second anniversary of the death of my father – a keen hiker and cyclist, who was killed during a hiking accident while training for a trek to the North Pole – I thought the best thing to do would be to strike out somewhere random. And where could be more random than a geohash? This was also my first ever geohashing expedition, although I’d been meaning to do it for a long, long while. And so began the Peter Huntley Memorial Geohashing Expedition!

I cycled from Kidlington, near Oxford (in the next graticule over) via National Cycle Network Route 51, through Bicester and towards Milton Keynes. Early on, I had to ford a river which had broken its banks and flooded the cyclepath (and even saw a minnow swimming across the cycle lane – quite surreal!). Later, I had a minor whoopsie when I stayed on the cycle route too long and ended up in Steeple Claydon, on the wrong side of the Padbury Brook valley, but soon corrected it. I’d anticipated having to hop a fence to get to the hashpoint, but it turned out that the field – which had been left to fallow – didn’t have a fence, and I only needed to walk about thirty paces into it in order to reach the hashpoint.

In memory of my dad, I pulled out a drawing of him and drank a bottle of Guinness (his preferred drink after a long day’s cycle), and began to head back. But disaster struck! Somehow, raptors must have gotten to my bike tyre while I wasn’t paying attention, because it was completely slashed. Being that I was now at the furthest point from home in my planned journey, I pushed it to the nearby village of Hillesden in the hope of finding a shop that might sell me sufficient supplies to repair the puncture, but was without luck. I was now faced with a choice: I could continue pushing it home, and try to get to Bicester (a little over three hours walk away) before the bike shop there shut, or I could turn and walk the wrong way (away from home) towards Buckingham (only about an hour’s walk away), and hope that I’d be able to find supplies there.

I headed for Buckingham, but the students I spoke to when I passed the University campus suggested that there wasn’t a bike shop in town, but suggested a hardware store that might sell a bike pump (I’d since found a patch kit at a corner shop, although it was of course useless without a pump). But while looking for the hardware store, I discovered quite by accident Solstice Cycles, a wonderful little bike shop right in the heart of Buckingham (at the time, Google Maps on my phone had been completely unable to find me a bike shop at all). The man there switched out my inner tube in a jiffy (he agreed that it could well have been a raptor attack that had damaged it), and set me on my way.

Unwilling to add further to my diversion, I took a more-direct route back to Bicester, straight down the A4421, and I’m sure I must have agitated the motorists who weren’t used to seeing cyclists on such a major road. In Bicester, I ate the remains of my packed lunch before getting back onto the cyclepath home.

Total distance travelled: 57.75 miles; mostly cycled, but more than I’d have liked on foot. And a spectacular first geohash.

Wish you could’ve been there, dad.

Dan takes a quick lunchtime cycle to Charlbury to find a hashpoint.

Location Alongside a lane that runs through the Quinton Green Business Park, South of the village of Quinton. Participants Dan…