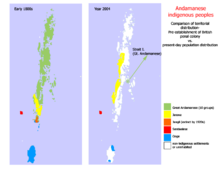 Comparative map showing the distribution of Andamanese tribes in the Andaman Islands – early 1800s versus in 2004. Notably:
(a) Rapid depopulation of the original southeastern Jarawa homeland in the 1789–1793 period
(b) Onge (in blue) and Great Andamanese shrinkage to isolated settlements
(c) Complete Jangil extinction by 1931
(d) Jarawa move to occupy depopulated former west coast homeland of the Great Andamanese, and
(e) Only the Sentinelese zone is somewhat intact

The population is estimated at 40 to 500. In 2001, Census of India officials recorded 21 males and 18 females. This survey was conducted from a distance and may not be accurate for the population which ranges over the 59.67 km2 (14,700 acres) island. The 2011 Census of India recorded 12 males and three females. Any effect from the 2004 Indian Ocean earthquake and resulting tsunami is not known, other than the confirmation obtained that they had survived the immediate aftermath.

Author Heinrich Harrer described one man as being 1.6 metres (5 ft 3 in) tall and apparently left handed.

I'm sure it doesn't mean much to you, but finally making my first Mün landing means the world(s) to me.

TIL that in 2010(!), Prince described the Internet as "...like MTV. At one time MTV was hip and suddenly it became outdated."

… Unlike most other rock stars, he had banned YouTube and iTunes from using any of his music and had…

I think I just discovered what a migraine feels like.