So needless to say, I’ve been busy! The giveaway might have been that I haven’t blogged much – here’s a short summary of some of the things I’ve gotten up to: 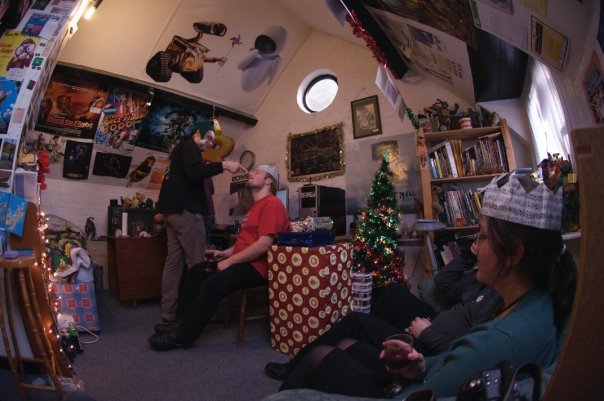 Yeah, it really has been a while. So we had a “Fake Christmas”: this year – well, last year, I suppose – many of us Aberites planned to spend Christmas with our families, so we had an extra celebration a little earlier while we could all see one another. There was food and (lots of) drink and an exchanging of gifts, followed by copious quantities of Guitar Hero: World Tour, which Ruth, JTA and I had bought for Claire.

Thanks to Rory for the photo.

Claire and I went up to Preston to see my folks for Christmas. Many board games were played, including the truly terrible Wost-Case Scenario Survival Game (it turns out, the survival challenge is sitting through this dull, uninspiring game). Was good to see my family for the first time in ages, though, give my sister Becky her long-belated birthday present (I’d always expected to be visiting “any time now”… for the four months or so previous since I’d gotten it), etc.

Because I’d been so busy (see Lots of Work, below), I actually took Nena, my main home desktop PC, up to Preston with me in order to get on with some more work over the Christmas break. My dad commented that there’s no shortage of computers at his house – I didn’t need to bring one! – but I pointed out that it was simply faster to unplug mine and bundle it into Claire’s car than it would be to set up my development toolchain, environment, etc. onto any other computer… by a long way.

Between Fake and Real Christmas, I found myself gifted a variety of fabulous board games, cookware (still haven’t found an opportunity to use my blowtorch yet – except to play with it, that is! – but my blender consistently proves useful), computer bits, clothes, books, and booze – which was all quite rapidly consumed.

Back to Aber for New Year, and counted it down at The Cottage with friends, including a proper countdown using a little Ruby application I knocked up for that purpose. I was dis-satisfied with the exclusion of the positive leap second (which I planned to take advantage of) in any of the official televised countdowns, as well as with the fact that the transmission and digital-decoding delay would throw off our accurate appreciation of midnight by about five seconds, so I developed a tool that should have been accurate to closer to a quarter of a second and ran it in a nice, huge font on my monitor (and counted midnight twice, of course).

For the second time (the first time was in 2000), I’m taking a break from alcohol, and this time Ruth is joining me, and so I stopped drinking at midnight. I’d originally planned this to be a year-long break, like last time, but I’m no longer sure: needs more thought. In any case, it’s certainly working well thus far, and I’m saving money and theoretically reducing my (previously, frankly ludicrous) alcohol tolerance without impacting my social life, so it’s a win regardless by this point.

I turned 28 with a minimum of hoo-hah. Birthdays are fine and all, but I’ll wait until my thirtieth before I find an excuse for a party.

In a form on Yet Another Fake Christmas, Claire and I visited her dad and his wife. They’ve just gotten themselves a Nintendo Wii with Wii Fit, which we played with a little and loved so much that we’ve since gotten a copy ourselves.

It’s a lot of fun, although it’s hard to believe that the “exercises” it has you perform are particularly effective unless you do no other physical activity whatsoever. However, it does a good job of teasing you if you’re overweight, which I suppose is worth something.

I hadn’t realised quite how busy I’d been for the last four months – and particularly for the last month and a half – with a web application I’ve been working on. It’s been a pet project benefitting a variety of organisations for the last six years or so, and my team and I have been slogging away at it for the last few months to make it suitable for a far wider audience. Suddenly, following the deployment of the latest version, almost a fortnight ago, I’ve found myself with a surprising amount of free time. The other day, Claire and I hung out with JTA and just sat and read the paper and discussed what was going on in the world for about half an hour before I started thinking, “Hey, isn’t there something I’m supposed to be working on right now?” before realising “No, no there isn’t!” Sheer bliss.

Which has finally given me time to catch up on my neglected RSS reader. I finally feel like I’m up-to-date! All that remained was to post a blog entry – this one, in fact – to let everybody who hasn’t seen or heard much of me of late know that I’m still alive!

So, that’s the last month and a bit for me! How’re you doing?

You wouldn't have thought it possible to incorrectly witness an oath or affirmation, would you? But somehow, a solicitor that…

Dan's father was killed this weekend in a tragic accident. [updated with funeral info and photo]

This review went a little bit meta, on account of the fact that I feature both as the reviewer and…

A very brief summary of some of the things I got up to last weekend with Ruth: Nottingham Alice Cooper…