Maybe this is just a pet hate that is exclusively mine, but there’s something that really gets on my nerves and it’s happened under one of the two scenarios below at least three times within the last month. It’s as if the very second you let people loose on social-networking site Facebook they immediately lose all common sense.

Here’s the scenario: you lose or break your mobile phone – I’m sure it’s happened to us all at some point or another – and as if that wasn’t bad enough, you’re stupid enough to not keep a backup of your contacts (virtually every phone can do this now, so there’s no excuse for the vast majority of people). Well, fair enough: like I said, this could happen to anybody, although you’re already due a talking-to by me about keeping your information backed up, and if it’s been stolen I’d quite like to know what information you had about me on there at the time. But in the most part you have my sympathy… so far.

How’re you going to get all those carefully-collected numbers back in your phone? Well, here are two wrong ways to do it. I’ll explain why later:

So why are they wrong?

The first and biggest reason that either of these methods are wrong is pretty fundamental, though: you’ve lost my mobile number, that’s your problem, so why don’t you make some of the effort to fix it. My mobile number is on my Facebook profile. I put it there so that you wouldn’t ever have to e-mail me if you wanted it. It’s there because improving connectivity between and sharing personal information with friends is entirely what Facebook is for. So next time you misplace your address book – which you failed to back up – why don’t you do some of the leg work and actually go to my profile and look it up for yourself.

If you can’t see it on my profile, it’s invariably because I’ve used Facebook’s (now-quite complex and powerfu) privacy tools to hide it from you because I don’t want you to have my mobile number. So there you are. If you’re on my Facebook friends list you should never, ever need to send me a Facebook message to get my mobile number.

Secondly, sending a bulk-Facebook message is wrong because it almost always leads to retards “following suit” like this: 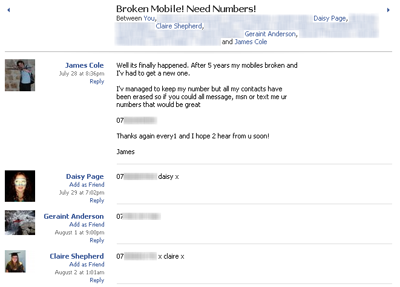 I don’t mind getting James’ new mobile number over a Facebook message. That’s fine. I shan’t be responding, because he ought to be bright enough to get my mobile number for himself, considering it’s only one-click away. But by bulk-sending it to everybody he knows, he’s underestimated the stupidity of his other friends. About 50% of the people he sent it to sent their mobile numbers back to the list by using “Reply All.”

Reply All is the only option available, and so a new Facebook user could conceivably make this mistake. But then a handful of James’ other friends make the same mistake, having seen one of them do it already. Wait, did I miss something? Are these people all patients at some mental hospital that James used to volunteer at, or something?

I don’t know who any of these people are, aside from the fact that they’re James’ other friends. I’m only permitted to read the profile of one of them, and he isn’t sharing his mobile number with me there, so I can only assume that they don’t want me to have their number. But then they’ve just turned around on that idea and given it to me. What?

I’m half-tempted to set up a handful of fake Facebook accounts just so that I can send a message back to each of the idiots like this:

I Need All Your Mobile Numbers

Between You, An Identity Thief, A Stalker, Somebody You’ve Never Met, Their Ex-, Every Man, and His Dog.

I’ve lost my mobile (again!) and can’t be bothered to look up your numbers on your profiles or contact you individually. Please use the “Reply All” form below and tell me and all the other people in the list above exactly how to contact you and harass you whenever we get bored.

The other, even more irritating way that people handle this self-inflicted (let’s face it, paper and pen is a backup if there’s no other way) tragedy is by creating a Facebook group exclusively for the purpose of re-harvesting their friend’s numbers. I’m sure you’ve all seen this happen at least once.

And it happens a lot: log in to Facebook and search for “lost mobile” in the Groups list. You won’t ever find out how many idiots do this, because Facebook only lists the first few hundred results. But there are lots. Lots and lots.

The first thing that’s wrong with this approach is an issue which I’m sure I’ll be one of very few people to care about, but it’s not the biggest problem: Facebook “Groups” are, by definition, according to Facebook’s own documentation, collections of “people with similar interests” and “places for discussion.”

I’ve never joined one of these “I’ve lost my mobile!” groups, because:

Not only is creating a Facebook group a mis-use of the service – this isn’t what groups are for! – but they suffer from all the same problems as Facebook bulk-mailing all your friends (i.e. if they reply, they all see each others’ numbers) but even worse. Most people create these groups but don’t make them “secret,” so anybody can join. Want a few hundred numbers to sell to an SMS-spammer? Just browse Facebook for awhile. Worse still, these groups don’t disappear until (after) every single member has left. So your phone number, which you stupidly put in the group description (if you’re the idiot who lost your phone) or on the wall of the group (if you’re one of their even-bigger-idiot friends), will be visible to pretty much any Facebook user, indefinately. Give yourself a pat on the back. I suggest using an ice pick.

What Little Timmy Should Have Done

Never let it be said that I’m overly negative when I criticise morons. I’m more than happy to educate them and I won’t even demand the right to use a heavy, blunt object to help the knowledge sink in.

Here’s what you should be doing in order to show off your uncommon sense. You can start today!

Back Up Your Mobile Phone

Just stop and think for a moment what your mobile phone is worth. I don’t mean the cost the insurance company will pay when you drop it in a pint of cider a week on Friday, I mean the value of the data inside it. How long would it take you to put all those numbers back in? If you’re a heavier user of the geekier features of modern phones: what about all the photos, e-mails, text messages, music, and the carefully-tweaked settings that make the icons have a purple background and that Crazy Frog video ringtone?

What To Do When It All Goes Wrong

Everything goes tits-up from time to time. Suppose you lost your phone in a house fire that destroyed the PC the backups were on, too. Or maybe your phone got stolen and the new “owner” was so malicious he used your SyncML connection (if you’d saved your password on the phone) to overwrite all of your online backups with pictures of Lolcats. Or perhaps you didn’t keep backups at all (so long as you promise to keep backups next time, it’s not so bad – we all have to learn the hard way once, I’m sure, how important backups are). What should you do?

First: take responsibility. There is always something you could have done to keep a better backup. Therefore, it’s your job to do as much of the legwork of getting your numbers back as you can. Don’t make it your friends’ problem. Go through your friends’ Facebook profiles and retreieve as many phone numbers as you can before you start bothering them.

Second: get numbers in a sensible way. If you have a few close circles of friends, it’s pretty trivial nowadays to Bluetooth/MMS/Infared hundreds of contacts from phone-to-phone, and this can be a great way to get yourself re-connected. Call up Barney, and say “Hey, Barney; let me buy you a pint tonight and take a copy of everybody in your address book – I’ve been an idiot and I didn’t keep a backup before I lost my phone the other week.” Barney’ll drink his pint and press some buttons on his phone while saying things like, “Do you know Robin? Marshall? Lily? Have you met Ted?” and these people will magically appear in your address book.

There’s almost certainly be people you can’t re-get the numbers for in this way, but you can still be sensible about it. Send messages individually to those few people and ask for their numbers, but not before double-checking that you actually need them. If you can’t think of a reason you’ll ever call them within the next year, why are you carrying around their number anyway? Unless they’re somebody you’d call “in an emergency” you can always look them up when you need them. That way, you won’t spend you entire time with a number in your phone that could go out of date (people change numbers all the time) and you’d never know until you came to phone them, six years down the line, and you’d have to look them up anyway. Save yourself (and them) the bother and keep them out of your book. It’s a liberating experience to tidy up your contacts list.

And finally: if you get a new mobile number with your new phone, drop a text message to everybody who might want to know it, but make sure you say who you are because you won’t be in their address book with your new number, yet. The number of text messages I’ve got in my life from a number unknown to me that read “Hey there! This is my new number! Bye!” is staggering.

Some people are just too stupid to be allowed mobile phones.

(don’t worry – no spoilers) Well – I’ve finished Half-Life 2. I must say, it just got more and more…

There’s a reason that people shouldn’t show me new programming languages and development platforms: I try them out. Even when…

An Interview With Gary McKinnon

Dan recommends listening to an interview with Gary McKinnon via BBC World Service.