14th July 2006: I’ve updated this article with some information on what could be an even easier and more cost-effective way to achieve this effect. Scroll down.
Here’s a guide to what you need to easily be able to run homebrew software like DSLinux on your Nintendo DS or DS Lite. Some things to know: 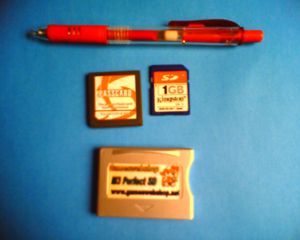 I’d promised someone pictures showing exactly how big and chunky this kind of hardware is. Shown above is:

You will also need: 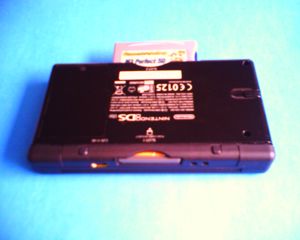 The PassCard goes into the DS slot, the flash card goes into the M3, and the M3 goes into the GBA slot, as shown in the picture, above. I’m using a DS Lite, and the M3 sticks out a little way, enough to be unsightly, but not problematic. The DS is upside-down, in case you’re confused. The small blue thing on the right of the M3 (at the top of the DS) is the tip of the SD card. Push gently against it to eject it.

Put the memory card into your PC’s reader, and run the M3 Game Manager software you installed. Select the media type you’re using, when prompted. Navigate to the memory card. Then just click the “Write NDS” button choose the Nintendo DS ROM you want to write. How many you can fit on at once depends on the capacity of the card. The M3 Perfect can handle CF cards up to 1GB and SD cards up to 2GB for the CF and SD varieties of M3, respectively. 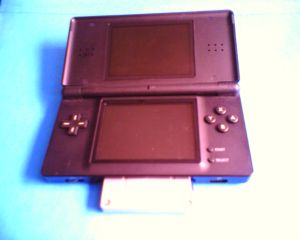 Here’s how the DS Lite looks with the M3 Perfect cartridge dangling out of it. Apparently it protudes less on the DS Phat.

A friend has just let me know about the NinjaPass. The plain old NinjaPass Media Launcher is just a PassKey2, by the look of things, but the NinjaPass DS Flash is both a PassKey2 (like the PassCard, above) and a flashable memory card (like the M3 Perfect and it’s accompanying memory card). It’s a single-card solution that you copy your ROMs to, put into the NDS slot on your DS Phat or DS Lite, and it just works.

Of course, I’ve not tried the NinjaPass for myself, so your milage may vary. Read some reviews first.

Dan explains how to get around the Wikipedia anti-SOPA/PIPA blackout, should you need to.

It turns out that Windows Longhorn is a lot like the child of Windows XP and Windows Server 2003, but…

In the words of Bender, “…another pointless day where I accomplish nothing.” It’s feeling a little that way. Last night’s…

Software Projects In The Context Of Swings

Eons old, but I rediscovered it today while tidying up my hard drive, so I thought I’d share it with…