Here’s a thought: what’s the minimum number of votes your party would need to attract in order to be able to secure a majority of seats in the House of Commons and form a government? Let’s try to work it out.

The 2017 general election reportedly enjoyed a 68.8% turnout. If we assume for simplicity’s sake that each constituency had the same turnout and that votes for candidates other than yours are equally-divided amongst your opposition, that means that the number of votes you need to attract in a given constituency is:

68.8% × the size of its electorate ÷ the number of candidates (rounded up)

The minimum number of votes you’d need would therefore be this number for each of the smallest 326 constituencies (326 is the fewest number of seats you can hold in the 650-seat House of Commons and guarantee a strict majority; in reality, a minority government can sometimes form a government but let’s not get into that right now). Constituencies vary significantly in size, from only 21,769 registered voters in Na h-Eileanan an Iar (the Western Isles of Scotland, an SNP/Labour marginal) to 110,697 in the Isle of Wight (which flip-flops between the Conservatives and the Liberals), but each is awarded exactly one seat, so if we’re talking about the minimum number of votes you need we can take the smallest 326.

I’ll leave you to decide how you feel about that. In the meantime, here’s my working (and you can tweak the turnout and number-of-parties fields to see how that affects things). My data comes from the following Wikipedia/Wikidata sources: [1], [2], [3], [4], [5] mostly because the Office of National Statistics’ search engine is terrible.

It’s was a busy weekend; the first of several, I’m sure. Mostly – put briefly – it’s been spent thusly:

Democracy: I’ll be voting “Yes” on Thursday’s referendum, and you should too (unless you’ve already been persuaded or are even helping with the fight). And while I’ve not had as much opportunity to help get this message out as Ruth and JTA have, I’ve tried to do my bit by joining them for a spot of leafleting over the weekend. I’m not entirely in favour of some of the campaign tactics being used (like the separate “Labour Yes” and “Conservative Yes” campaigns which act as if one another don’t exist: to me, whether or not we adopt AV has nothing to do with parties or candidates and everything to do with it just being a better way of representing the opinion of the voters), but I guess that they’re necessary to get the point across to some folks. And this slight spindoctoring quickly pales in the light of some of the lies that the no-to-AV campaigners are telling.

Injury: Not to me, this time, but to my father, who came off his bike while cycling around Scotland this weekend. I’ve not had the chance to talk to him since they pushed back his surgery (he’s broken parts of himself and they want to turn him into a cyborg put a metal plate in him, or something) until later this week. Right now, then, he’s confined to hospital, which I can’t imagine he’s enjoying very much. If they’ve hooked you up with Internet access, dad – get well soon.

Packing: Oh, so much packing. I got started on boxing up all of the board games, the other day, only to find out that there were quite a few more of them than I remembered. I’ve also started on my collection of cables and computer knick-knacks, and discovered that I have no fewer than five male-to-male VGA cables. Why? I’ve no idea. I’ve been gradually cutting down on my spare supplies (do I really need three spare floppy drive cables when I don’t use any floppy disks?), but it’s hard: the very next day after I throw them out, you can guarantee that’ll be the moment I need one of my many AT-to-PS2 keyboard adapters.

Friendship: A couple of weeks ago I met Adrian, an international student from the USA who’s been in Oxford for a year or so for the final year of zer* study. Ze and I ‘clicked’ and formed an immediate connection, instantly getting along remarkably well. We spent a little of this weekend together, and for a moment there, it seemed like there might be the potential for a romantic connection, too. But sadly, by the time we got into gear ze had only two days left in the UK before jetting off back home to the States… and 3,900 miles is a long, long way. We both agreed that we should have met a year ago, but c’est la vie: the world is smaller, these days, thanks to the Internet, so there’s every chance of building an online friendship, punctuated those rare occasions when we happen to be in one another’s country.

* It’s a gender-neutral pronoun, if you haven’t come across one before (and as I usually only find myself using them in the context of BiCon, you’d be forgiven). Aside from their linguistic benefits in politically-correct society,  they’re often favoured by those whose gender identity is neither male nor female.

The title of this blog post is, of course, a reference to What I Learned About Ego, Opinion, Art & Commerce, a fantastic 2001 Goo Goo Dolls compilation album.

Earlier this week, I had a strange experience, but it requires a little bit of back story.

Spend enough time with me, and you’ll hear me gripe about the problems of our democracy: the faults of the plurality voting system, gerrymandering and it’s long-term ripple effects, party politics, the motivations of politicians, and much more, even before I get down to talking about the apathy of constituents and our disgustingly ill-informed populace. I know how little my vote counts for (clue: pretty much nothing), and that’s why to make my opinions heard though occasional, carefully-researched letters to the people who represent me, and I encourage others to do the same – a letter, while in itself not particularly powerful, is still worth a lot more than a ballot paper. And thanks to WriteToThem, it’s really easy to send correspondence to the elected officials who represent you on the local, regional, national and international stages. Perhaps inspired by some combination of (a) my recent experience with Pecky and the Squawkies, (b)  the mess created by their seagull buddies on and around rubbish collection days – which seems to have gotten worse recently (see photo, above) – and (c) the petitions that seem to be floating about town in general over the last few weeks, requesting that something (humane) is done about the troublesome Aber seagull population, I wrote to the council to express my thoughts on the matter, and to make a few suggestions based on things that have been tried by other towns affected by seagulls.

And so I got an e-mail in response to my query about seagulls: great, it’s a pressing issue, apparently, and one that’s attracting a lot of attention from constituents (nice to know I’m not alone in my opinions), and it’s now scheduled for discussion on the next Department of Environmental Services and Housing Scrutiny Committee meeting, which is nice. What I didn’t expect was what followed. 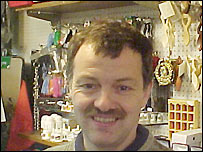 The chap pictured above (thanks, BBC) is Ceredig Davies, Aberystwyth Central Ward councilor for Ceredigion Council. On Monday night, while I was on my way back to The Cottage after ReAnime Night (with a brief diversion to say goodnight to Claire on the way), he pulled up his car alongside me and leapt out, shaking my hand as he went.

He thanked me for my e-mail, explained that he’d e-mailed me and asked if I’d got it, and told me what he’d done about it so far and the challenges were that he thought might make it difficult to implement my suggestions (mostly only things I was aware of, but sadly not things I know the answers to). Then he dashed back across the street, hopped back into his car, and drove away.

This is perhaps the most pro-active response I’ve ever had from an elected official (even without the surprise meeting in the street, his reply to my e-mail was prompt and informative, and was followed-up by more information that interested me), but it left a question burning in my mind: Mr. Davies represents 15,000 or more people in this area, of which I’m just one – how the hell did he know what I looked like, let alone well-enough to spot me in the street. From his car? From behind? At night?

I’m impressed and all that, but it’s still a little spooky. I asked him at the time how he recognised me, and he mumbled something about being the kind of councilor who’s “a bit of an anorak” (what does that mean? does he sit up at night researching his constituents and memorising their appearances and daily movements? does he have a little book with all of our national insurance numbers in and cross them out when he meets us, like a trainspotter but with people?) as he made his way back to his car.

So, the verdict on Mr. Davies: very effective, but also a little bit scary.