A few days ago, Ange Albertini retweteed an tweet from 2013 asking for a document that shows its own MD5 or SHA1 hash.

Later, he named such a document an hashquine, which seems to be appropriate: in computing, a quine is a program that prints its own source code when run.

Now, creating a program that prints its own hash is not that difficult, as several ways can be used to retrieve its source code before computing the hash (the second method does not work for compiled programs):

However, conventional documents such as images are likely not to be Turing-complete, so computing their hash is not possible directly. Instead, it is possible to leverage hash collisions to perform the trick.

This is the method that I used to create the following GIF MD5 hashquine:

Once I managed to do create it, I figured out that it was not the first GIF MD5 hashquine ever made, since spq beat me to it.

I will take that opportunity to look at how that one was done, and highlight the differences.

Finally, my code is on Github, so if you want to create your own gif md5 hashquine, you could easily start from there!

To create the hasquine, the two following ressources were used exhaustively:

A note about MD5 collisions

We say that MD5 is obsolete because one of the properties of a cryptographic hash function is that it should not be possible to find two messages with the same hash.

Today, two practical attacks can be performed on MD5:

To the best of my knowledge, attack 1 needs a few seconds on a regular computer, whereas attack 2 needs a greater deal of ressources (especially, time). We will use attack 1 in the following.

Please also note that we are not able (yet), given a MD5 hash H, to find a message M such as md5(M) is H. So creating a GIF displaying a fixed MD5 hash and then bruteforcing some bytes to append at the end until the MD5 is the one displayed is not possible.

The GIF file format does not allow to perform arbitrary computations. So we can not ask the software used to display the image to compute the MD5. Instead, we will rely on MD5 collisions.

In other words, we will have a GIF file that displays all 16 possibles characters for each single character of the MD5 “output”.

If we allow the GIF to loop, it would look like this:

Now, the idea is, for each character, to comment out each frame but the one corresponding to the target hash. Then, if we don’t allow the GIF to loop, it will end displaying the target MD5 hash, which is what we want.

To do so, we will, for each possible character of the MD5 hash, generate a MD5 collision at some place in the GIF. That’s 16×32=512 collisions to be generated, but we average 3.5 seconds per collision on our computer so it should run under 30 minutes.

Once this is done, we will have a valid GIF file. We can compute its hash: it will not change from that point.

Now that we have the hash, for each possible character of the MD5 hash, we will chose one or the other collision “block” previously computed. In one case, the character will be displayed, on the other it will be commented out. Because we replace some part of the GIF file with the specific collision “block” previously computed at that very same place, the MD5 hash of the GIF file will not change.

All what is left to do is to figure out how to insert the collision “blocks” in the GIF file (they look mostly random), so that:

I will detail the process for one character.

Example for one character

Let’s look at the part of the generated GIF file responsible for displaying (or not) the character 7 at the first position of the MD5 hash.

The figure below shows the relevant hexdump displaying side by side the two possible choices for the collision block (click to display in full size):

The collision “block” is displayed in bold (from 0x1b00 to 0x1b80), with the changing bytes written in red.

In the GIF file formats, comments are defined as followed:

The other colours in the image above represent other GIF blocks:

To create this part of the GIF, I considered the following:

All things considered, it is not that difficult, but many things must be considered at the same time so it is not easy to explain. I hope that the image above with the various colours helps to understand.

Once all this has been done, we have a proper GIF displaying its own MD5 hash! It is composed of one frame for the background, plus 32 frames for each character of the MD5 hash.

To speed-up the displaying of the hash, we can add to the process a little bit of bruteforcing so that some characters of the hash will be the one we want.

I fixed 6 characters, which does not add much computations to create the GIF. Feel free to add more if needed.

Of course, the initial image (the background) should have those fixed characters in it. I chose the characters d5 and dead as shown in the image below, so that this speed-up is not obvious!

That makes a total of 28 frames. At 20ms per frame, displaying the hash takes a little over half a second.

Analysis of a GIF MD5 hashquine

Since I found out that an other GIF MD5 hashquine has been created before mine once I finished creating one, I thought it may be interesting to compare the two independent creations.

The first noticeable thing is that 7-digits displays have been used. This is an interesting trade-off:

Now, as you can see when loading the GIF file, a hash of 32 8 characters is first displayed, then each segment needed to be turned off is hidden. This is done by displaying a black square on top. Indeed, if we paint the background white, the final image looks like this:

My guess is that it was easier to do so, because there was no need to handle all 16 possible characters. Instead, only a black square was needed.

Also, the size (in bytes) of the black square (42 bytes) is smaller than my characters (58 to 84 bytes), meaning that it is more likely to fit. Indeed, I needed to consider the case in my code where I don’t have enough space and need to generate an other collision.

Other than that, the method is almost identical: the only difference I noticed is that spq used two sub-block comments or collision alignment and skipping over the collision bytes, whereas I used only one.

For reference, here is an example of a black square skipped over: 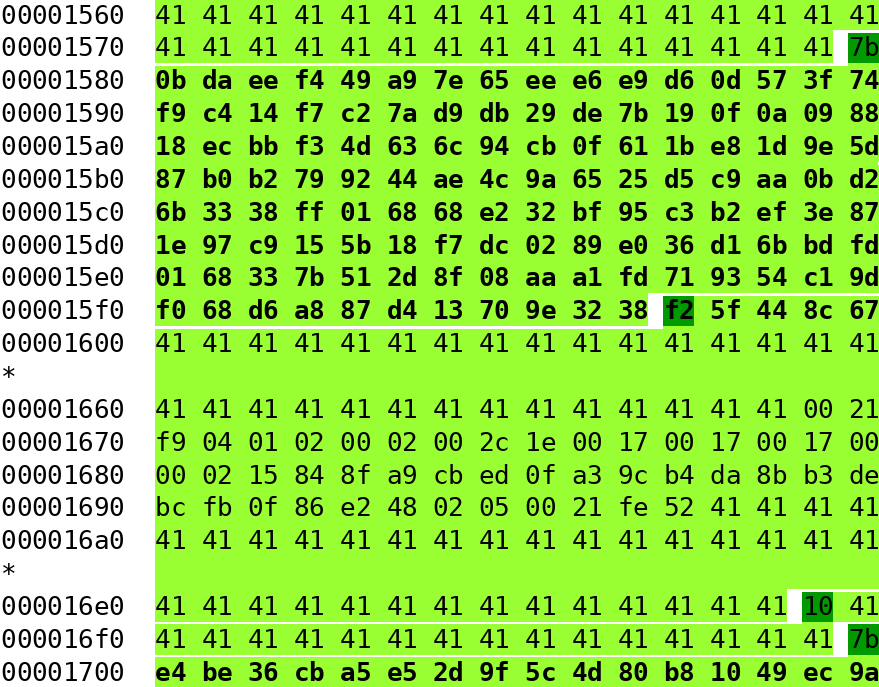 And here is another black square that is displayed in the GIF: 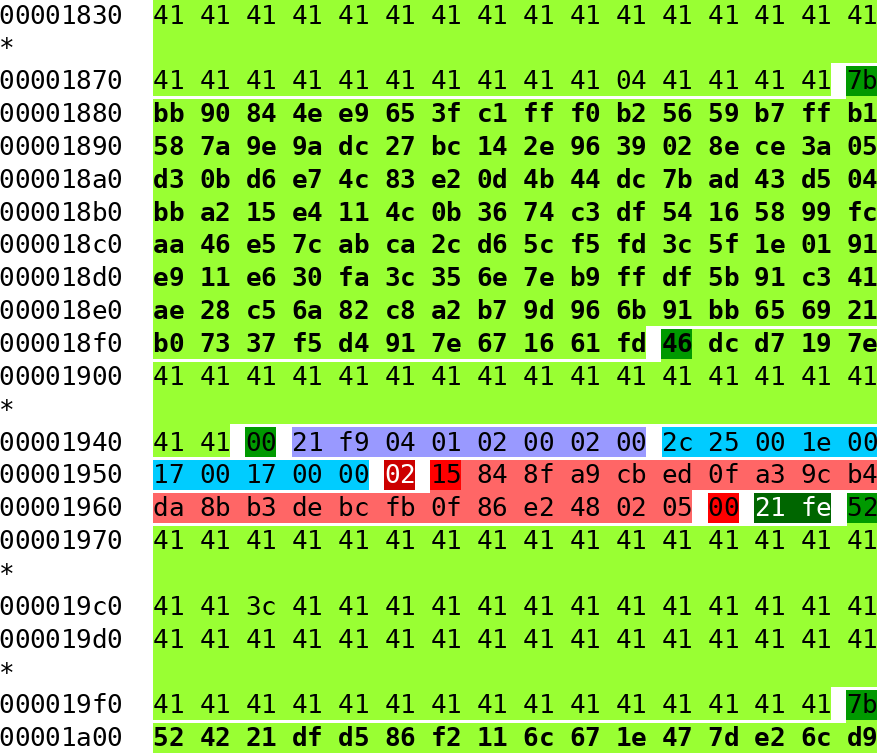 Hashquines are fun! Many thanks to Ange Albertini for the challenge, you made me dive into the GIF file format, which I probably wouldn’t have done otherwise.

And of course, well done to spq for creating the first known GIF MD5 hashquine!

Geeky post. I’ve just been playing with the data integration and XML-parsing features offered by the new version of Macromedia…

Moxie Marlinspike "acquires" a Cellebrite UFED and hacks it, with all the delight and sarcasm you'd expect. Dan partially-translates.

Dan deploys Flic 2 "smart buttons" to remind him to read his post and bring the milk in.

Sick of losing Mastermind to his kids, Dan cheats by implementing a brute-force solver he can run on his phone.