Dig Dog is a pretty fun little video game. Call it “Spelunky for kids”—and don’t think of that as a backhanded compliment, either. Dig Dog, which launched Thursday on iOS, Xbox, Windows, and Mac, shaves away some of the genre’s complications, controls smoothly, and has depth. It’s as if the modern wave of randomly generated, dig-for-surprises adventures had existed in early ’80s arcades. (And all for only $3!)

I liked Dig Dog enough when I stumbled upon it at last year’s Fantastic Arcade event in Austin, Texas. But my interest in the game spiked when its creator reached out ahead of this week’s launch to confirm something I’m not sure any other video game creator has done: coding an entire game by himself… without using his hands.

This is the second in a series of four blog posts which ought to have been published during January 2013, but ran late because I didn’t want to publish any of them before the first one.

I spent the weekend of my birthday working in London, alongside the Squiz team, who make the CMS that forms the foundation of most of the public-facing websites of the Bodleian Libraries. We’d originally scheduled this visit for a different week, but – in that way that projects sometimes do – the project got juggled about a bit and so I found myself spending the week of my birthday away from home.

But on Tuesday – my second day working on-site at Squiz’s office, and coincidentally my birthday – disaster struck! Our first clue was when the lights went out. And then, a minute or so later, when the fire alarm started going off. No big deal, we all thought, as we gathered our possessions and prepared to leave the office – it’s probably just that the fire alarm sounds as a precaution if it’s electricity supply is disrupted… but as we started to go down the stairs and smelled the smoke, we realised that there really was a fire.

The first two fire engines arrived within minutes. Apparently, they don’t mess about when a city centre office block catches light. The smoke was very visible from the street: thick grey plumes pouring out from the basement windows. Theories about the cause of the fire were whispered around the assembled crowd, and the consensus seemed to be that the substation in the basement had overheated and set alight its room.

A third fire engine arrived, and – after about a quarter hour of assessing the situation and controlling the crowd – we were told that we wouldn’t be able to get back into our building for “at least an hour, probably more.” So, being British, we therefore decamped to one of the nearby bars for networking and a round of gin & tonic. After I texted some friends to say that I hadn’t expected to spend the afternoon of my birthday in the pub, but that it wasn’t an entirely unwelcome experience, a few of them had the cheek to ask once again how the fire had actually started.

By the time we were allowed to return to the building, it was already getting dark, and we quickly discovered a new problem that faced us: with the power still well and truly out, the electronic door locks that secured the offices had become completely unusable. Not willing to abandon my laptop, keys, and other personal possessions overnight in an unfamiliar office, I waited around until a locksmith had been summoned and had drilled his way through the cylinder and allowed us into the building.

It being my birthday, I’d arranged that Ruth would come and spend the night down in London, and that we’d go out to Dans le Noir, a restaurant that I’d heard about from news articles and via friends some years prior, and always wanted to try. The restaurant has a distinct and quite remarkable theme that you probably won’t find anywhere else: that theme is that you eat unidentified food in pitch blackness.

As our (blind!) waiter, Gao, led Ruth and I by touch to our table, we suddenly realised that we’d all but forgotten exactly how dark pitch blackness actually is. When you stumble over your coffee table in the dark on a morning, that’s not truly black: there’s that sliver of light coming from underneath the curtains, or the faint glow of the LED light on the stereo. Real, complete darkness is disorienting and confusing, and to sit around in it – not even able to see whether your eyes are open or closed – for hours at a time is quite remarkable.

It took us a little while to learn the new skills required to survive in this environment, but Gao was incredibly helpful. We worked out mechanisms for pouring drinks, for checking whether our plates were empty, and for communicating our relative movements (being geeks, as we are, Ruth and I quickly developed a three-dimensional coordinate-based system for navigating relative to an agreed centre-point: the tip of the bottle of our mystery wine). We also learned that there’s something truly humbling about being dependent upon the aid of a blind person to do something that you’d normally be quite capable of doing alone: simple things, like finding where your glass is.

But the bigger lesson that we learned was about how darkness changes the way that we operate on a social level. Ruth and I were sat alongside another couple, and – deprived of body language, the judgement of sight, and the scrutiny of eye contact – we quickly entered into a conversation that was far deeper and more real than I would have anticipated having with total strangers. It was particularly strange to see Ruth, who’s usually so shy around new people, really come out as confident and open. I theorise that (in normally-signted people) eye contact – that is, being able to see that others can see you – serves as a regulator of our willingness to be transparent. Depriving it for long enough that its lack begins to feel natural makes us more frank and honest. Strange.

Back at Squiz the following day, there was still no electricity. Credit is due to the team there, though, who quickly put in to effect their emergency plans and literally “moved office” to a handful of conference rooms and meeting spaces around Shoreditch. “Runners” were nominated to help relay messages and equipment between disparate groups of people, and virtualised networks were established across the city. I laughed when I discovered that Squiz’s old offices had been in an old fire station.

Before long, the folks I’d been working with and I were settled into a basement meeting room in a nearby café, running a stack of Mac desktops and laptops from a monumental string of power strips, and juggling an Internet connection between the café’s WiFi and a stack of Mifi-like devices. We were able to get on with our work, and the day was saved, all thanks to some smart emergency planning. Later in the week, a generator was deployed outside the building and we were able to return to normal desks, but the quick-thinking of the management ensured that a minimum of disruption was caused in the meantime.

Not one to waste the opportunity to make the most of being in London for a week, I spent another of my evenings out with Bryn. He and I went out to the Free Fringe Fundraiser, which – despite a notable absence of Peter Buckley Hill, who had caught a case of the then-dominating norovirus – was still a great deal of fun. It was particularly pleasing to get to see Norman Lovett in the flesh: his particular brand of surrealist anti-humour tickles me mercilessly.

So what could have been “just another business trip” turned into quite the adventure, between fires and birthdays and eating-in-the-dark and comedy. If only it hadn’t taken me two months to finish writing about it…

This morning, I saw the BBC News Magazine article about Cerrie Burnell, who’s apparently a children’s television presenter (I’d never heard of her before, but that doesn’t mean anything – I can’t remember the last time I watched any kids’ TV). The article centres on the fact that Cerrie was born without a right hand (her right arm stops at the elbow), and states that some parents are finding it awkward to answer the questions that their inquisitive children are asking about it (“Where did her arm go?” etc.). 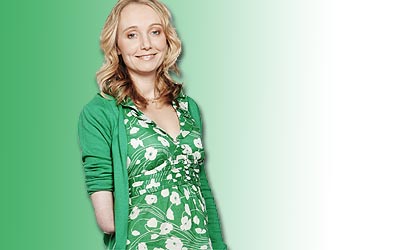 After reading most of the (brilliant, really supportive) comments in the Have Your Say at the end of the article, I thought I’d look up some more information about this presenter I’d never heard of (y’know, because that’s what you do). Her Wikipedia page was a little sparse, so I tried the link on it to her homepage (as provided by CBBC).

There, it lists a handful of questions that kids will ask, along with fun answers. Do you have any brothers and sisters? Yes, I have a younger brother and a cousin I’m close to as well. When is your birthday? It’s the 30th August. If you had a super-power, what would it be? I’d like to be able to grow a tail and turn into a mermaid. You see the kinds of things I’m talking about.

I laughed out loud. And then I felt bad about it.

And then I blogged.