As the days get longer and the weather gets better, woodland trails and city alleyways alike begin to more-frequently see a particular brand of explorer. Clutching GPS devices (or, increasingly, mid- to high-end mobile phones), these satellite-guided adventurers shy away from normal people, whom they call “muggles”. Outwardly, this is out of concern for the continuity of their tiny treasure, but as often as not, it’s because geocachers – and especially urban geocachers, who often don’t even have the excuse of “getting some fresh air” to justify their hobby – are likely to be seen as a little odd., “You do what for a hobby? Find lost lunchboxes?”

I’ve written plenty about geocaching already, but the only important thing to know for this particular anecdote is how geocaches are rated to indicate how hard they are. There are two scales, each scored from one to five “stars”. The first scale is difficulty, which is about how challenging the geocache is to find – a 1-star rating means that it’s in plain sight, not camouflaged, etc., while higher ratings might mean that it’s well-concealed, tiny, disguised as something else, or requires that you solve a puzzle in order to determine where it is. The second scale is terrain, which is about how challenging the geocache is to get to. A 1-star rating is typically accessible by wheelchair – you certainly don’t need to leave paved roads and footpaths to get it; higher ratings might mean steep gradients, tree climbing, long hikes, and so on. The highest terrain ratings often mean that specialised skills or equipment are required (for example, rock climbing gear or a scuba tank).

As you can imagine, caches with a 5-star “terrain” rating are rarer, and are especially uncommon in built-up areas. Half-way up cliffs… deep inside caves… miles out to sea: these are the places you’d expect to see geocaches with the highest level of “terrain” score. So imagine my surprise when I discover GC13WZQ (“Swing Lower”), a geocache with a 1-star “difficulty” rating but a 5-star “terrain” rating, just a few minutes walk from Oxford City Centre. In the seven years this cache has been in place, it had seen fewer than 110 successful visitors: contrast to its neighbour, GCK57Z (“Swing Low”) – a virtual cache less than 10 metres away – which has seen about six times as many visits in only 3 years longer. This, I thought, was a cache I had to see.

Folks recently attempting to find the geocache had reported (OxfordLad, izybuzyfingers, twitcher50) that it had been made inaccessible by the recent addition of boards and barbed wire to the edges of the bridge. Counter-arguments were raised (sandvika, Mad H@ter) to show that this didn’t make the cache inaccessible; it merely made it accessible only by boat, which had already been suggested in the “attributes” for the cache.

I’m not a believer in the idea that any particular geocache can only be found one particular way. Also: I don’t have a boat. So I decided to make an expedition to “Swing Lower” my own damn way. Approaching the bridge under which the cache is located, I immediately saw the boards and barbed wire that had been reported by those that had attempted it earlier in the year. But as I would soon discover, anybody who was put off by a little bit of plywood and the risk of damp feet really wasn’t built of the right stuff to be able to do what was required next. Put simply: boards and barbed wire are the least of your problems when you’re hunting for GC13WZQ.

The bigger challenge was getting to the cache once underneath the bridge. I discovered (perhaps with a little inspiration from “Jackhuber”) that it was possible to brace myself against a pair of the beams that run the length of the bridge and – facing down – shuffle sideways to get to the centre of the bridge. I felt acutely aware of the fact that until I got over the central channel, the depth of the water might not be enough to break my fall (especially if I slipped and fell head-first), but was reassured by the fact that I’d brought fellow ‘cacher and coworker kateevery and she was ready, perhaps not to swim out and get me but at least to call 999, should the need arise.

So there you go. To all of you wusses for whom “there are boards and barbed wire in the way” was an excuse: you hadn’t even begun to face the challenge of “Swing Lower”. I’ve written up a Batman-themed description of the expedition as part of my log report.

This conveniently coincides with the week that I launched my new collection of puzzle geocaches, the Oxford Steganography Series – four geocaches (GC54F78, GC54F7B, GC54F7J, GC54F7N) whose coordinates are concealed within images or text, each of which contains a transparency film that can be used (I made a video showing how) to determine the coordinates of a fifth, bonus cache. I’m reasonably pleased with the series, and I’ve been enjoying reading the reports of the ‘cachers who’ve been out hunting for them, so far.

After my visit the other day, I went home, read some of the logs, and thought about this cache. Boards? Boards are something that people worry about when they’re not Batman. A cache that’s placed in the middle of dead space? That’s not a problem Batman would have. I can be Batman, sure. I AM BATMAN!

So today, I finished work, changed into a set of loose clothing (that I could comfortably climb in and wouldn’t mind having to swim in if I had to), rallied my coworker and fellow ‘cacher kateevery to act as my eyes-on-land – and my photographer – and set out to the bridge.

The boards on the side I opted to start my expedition from were a little more-troublesome – stretching farther out over the water – than the one I’d taken on before, but that hardly mattered: today, I was Batman. A grab and a leap, and I was on the other side. Next came the tough bit – the crossing: no Bat-Belt; no Batarang… but I still had my pure Batmanosity. Leaping up and bracing myself against the beams, I began shuffling across. Just as I began to tire, kateevery – my very own Robin – called out, “just four more steps”, exactly the motivation I needed to complete my crossing and grab the cache. 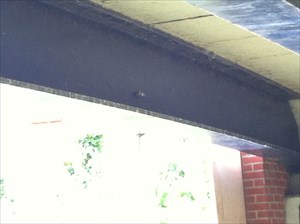