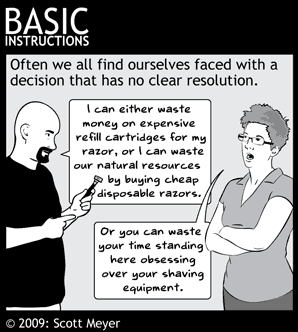 As the folks leaving comments on that comic quite rightly note, the comic covers only two of a number of different solutions to shaving: disposable razors, and cartridge razors, neglecting at least three other alternatives (even if you don’t count “just let it grow” as an option). Thanks in part of many of these comments, he’s now going to experiment with a few different options.

I’ve tried more different approaches than most gents, I suspect, so I thought I’d share with you a brief history of my shaving experience:

Surely I can’t be the only person who’s found these to be quite so useless as they appear. I’ve owned two in my time: a basic one that my dad gave me during my teen years in lieu of the iconic father-son bonding experience that I’m lead to believe that many other boys found in learning to shave from their dads; and a second, more-fancy one given to me in a gift box which also contained other male grooming tools (some of which are actually really quite useful: it’s just a pity that the shaver itself isn’t up to much).

I don’t hear anybody else complaining, so I’m probably in a minority: perhaps it’s the the softness of my skin… or the prickliness of my hair… or maybe I’m just “doing it wrong.” The net result is much the same: if I use an electric shaver it cuts my facial hair down just enough to still be slightly stubbly, it’s near-impossible to make a good effort of the area under my jaw, and there isn’t the control to be able to work around the outlines of a partial beard, as I have nowadays. Perhaps worse yet, it always feels like they “pluck” almost as much as they “cut”. The first few times I used one I took it apart to try to work out if I’d perhaps missed a crucial set-up step, like pulling out some kind of secret pin that actually engaged the razor blades. I hadn’t. 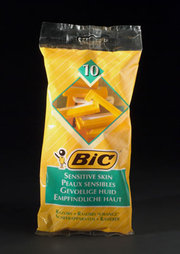 So I ended up using disposable razors. They’re cheap and simple and they work, right? They’re not the easiest things in the world, with their flimsy little plasticky handles and their strange shape… Although there is the fact that they’re not actually very sharp.

You know how they say that you’re more likely to cut yourself with a blunt blade than a sharp one, because of the increased pressure you have to use? Well there’s a limit to that logic, and the limit is when the blade is so dull that you’d be hard-pressed to cut yourself if you were trying. I don’t know if it’s an anti-suicide measure by the Bic company, but wow are their blades ineffective. Sometimes you feel like you’d be better using the edge of the shitty plastic handle than the metal blade edge.

One day, back in in my first year at University, an unexpected parcel arrived for me. It turned out to be from Gillette, and contained a Gillette Mach3 (which had been launched a year-and-a-bit earlier). Their thinking, of course, was that as they’d given me a free razor I’d use it and then continue to buy the blades. “The fools,” I thought, “I’m perfectly happy with my twice-a-week-if-I-can-be-bothered shaves with these throwaway plasic things!” I planned to use the new razor ’til I’d blunted (all three of) it’s blades, then I’d just throw it away. No problem.

It turns out that giving away free razors like this might have been one of the smartest marketing promotions that Gillette has ever done, because, for me at least, it worked. A three-blade cartridge razor is a fabulous way to shave, and it’s a huge improvement on disposables. I’m sure that over the nine years or so I used my Mach3 – even if you don’t count the extra one I bought when I lost one – Gillette more-than made their money back in all of the cartridges I bought.

It’s got a proper handle with grips that work even when it’s wet, a funky button-release to let go of spent cartridges (and for me, at least, the blades would last a reasonable amount of time, presumably aided by the fact that the work was shared amongst three cutting surfaces), it tilts gently to work around hard-to-reach spots… it’s just a really well-designed bit of technology.

Back in the early years of the 20th century, the removable-blade safety razor appeared to fill the demand for a razor that was easier than straight razors, which required such care and attention to both use and maintenance that many men just said “fuck it” and went to the barber’s instead. For decades, the double-edged razor was king, until it started to give way in the 1970s to cartridge razors and electric shavers. There are two major reasons for this change: firstly, cartridge razors are easier to use than double-edged razors – you can use them even if you’re tired, or drunk, or stupid. Secondly, cartridge razors (and, to a lesser extent, except approaching Christmas, electric shavers) have been very heavily marketed for years and years: this makes sense from the perspective of the manufacturer, because of the principle of vendor lock-in. Vendor lock-in, more often discussed in the context of electronic goods and computer software, is about forcing the users of your product to continue to use your product: to remove from them the freedom to go elsewhere. It’s particularly obvious in the marketplace of cartridge razors, because each manufacturer can manufacture blade cartridges which fit only it’s own products. An entire marketing strategy, the razor-and-blades business model, is named after this approach.

At the tail end of this hundred-year history of razors is now, 2009. I’ve gotten good use out of my Mach3, but there are a few things over the last year or so that have really put me off continuing to use it:

So, a month and a bit ago, I decided to escape from this trap, and go open-source with an old-school double-edged razor.

Sick of the marketing nonsense and the overinflated (and rising) costs of cartridges, I bought myself a traditional style safety razor (it looks a lot like the one in the photo in the last section), brush, soap, and a sackload of blades: and wow, blades are cheap.

It turns out that learning to use a double-edged safety razor is just a little bit like learning to shave all over again, with plenty of opportunity for self-injury along the way: although it doesn’t take so long – despite managing to clip myself the first few times I used it (nothing that a quick application of titanium dioxide couldn’t fix, albeit in an ouchy-ouchy way). It also takes quite a bit longer than shaving with a cartridge razor: rather than the eight minutes or so I’d spend shaving with my Mach3, I spend about 18 minutes in the bathroom with my double-edged safety razor. That’s not the end of the world, because I only bother to shave about one day in three anyway, and adding ten minutes to the time it takes to do something so infrequent isn’t going to kill me.

It’s actually remarkably good for the extra time it takes, though: I’m suddenly all remarkably-smooth, having shaved with this scary-looking implement: better than I’d ever managed with a cartridge or with a disposable, and far, far better than I ever got out of an electric.

So: cheap as chips to get blades for, and a better shave, at the expense of taking longer to actually have a shave. It’s a good deal in my book, and I’d recommend giving it a try, gents, if you haven’t already. Plus, you get the same kind of fuzzy feeling you get from using Linux or OpenOffice.org because it’s just a little bit more like using something that’s genuinely free of vendor lock-in.

Plus, it looks cool.

(I’m considering trying a proper straight razor at some point – or, more likely, one which takes snapped razor-blades in an injector, because I don’t particularly feel like having to learn how to sharpen and hone a true razor – anybody got any experience of them?)

A recent YouTube video by Veritasium helped Dan understand some of the quirks of YouTube's algorithms. Why hadn't he understood…

Another new week. I’m surprisingly jolly about it. Spent the morning so far discussing corporate image with my boss. [quiz…

All Noise, No Product

After coming across a product called SonicNotify, Dan discovers that it is possible after all for somebody to invent a…