So, like a handful of others, I’ll be participating in Andy‘s Ninja Burger game tonight. He’s asked us each to throw together a character – or at least to look at character generation – so here’s mine: 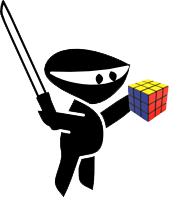 Background: Ava is descended from a long history of Ninja drivers. Despite only being an average driver, he seeks to gain the respect and honour of his family through his work with Ninja Burger, and by practicing the calm, collected, enlightened path of his clan. He prefers blunt weapons and particularly the bo staff.

If you haven’t put together a character yet because you haven’t seen the rules, there’s a copy here. Just make sure you use the 2nd edition ones!

I gather we’ll be meeting in #ninjaburger on Freenode at 7:30ish. If you’re confused as to how to do that, just use Abnib Chat and ask for help.

2 replies to Enter The Ninja

It’s been a long while, but I’ve got some more interactive fiction to recommend: Violet, by Jeremy Freese. It’s got…

Sat in Burger King… Bryn: So many nice things come in .deb packages… Dan: Yeh. Except for some nice things…

Tips on using Dungeondraft to make RPG maps you can print for tabletop use.

PowerPizza! It’s a laptop bag that looks like a pizza box! No longer do you have to worry about your…