After extended delays, here’s the remainder of my “looking back at QParty“ post.

The party kicked off at 6pm, and guests trickled in over about about half hour to either side, which gave Claire and I ample time to try to greet everybody as they came through the doors. At least, it did until about 6:30pm, when a sudden rush of the remaining guests swept us off our feet and made us spend much of the remaining time running around everybody who’d appeared since to make sure we at least got to talk to everybody. Paul – with help from Matt P and Rory – manned the door, taking people’s coats and offering glasses of champagne… well, sparkling white wine. In the cases where he liked the look of the people coming in, he remembered to tell them about the bar tab, too. 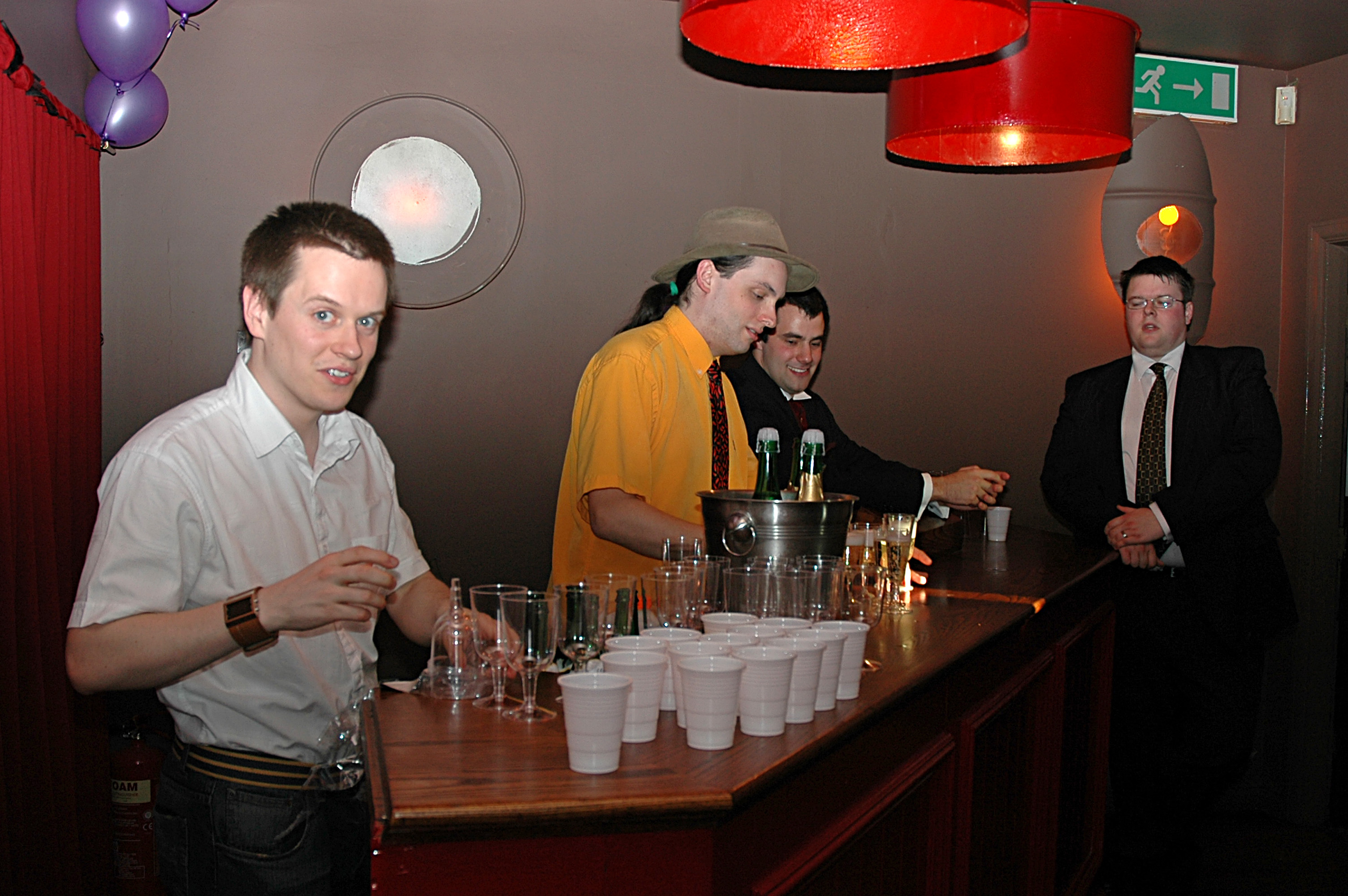 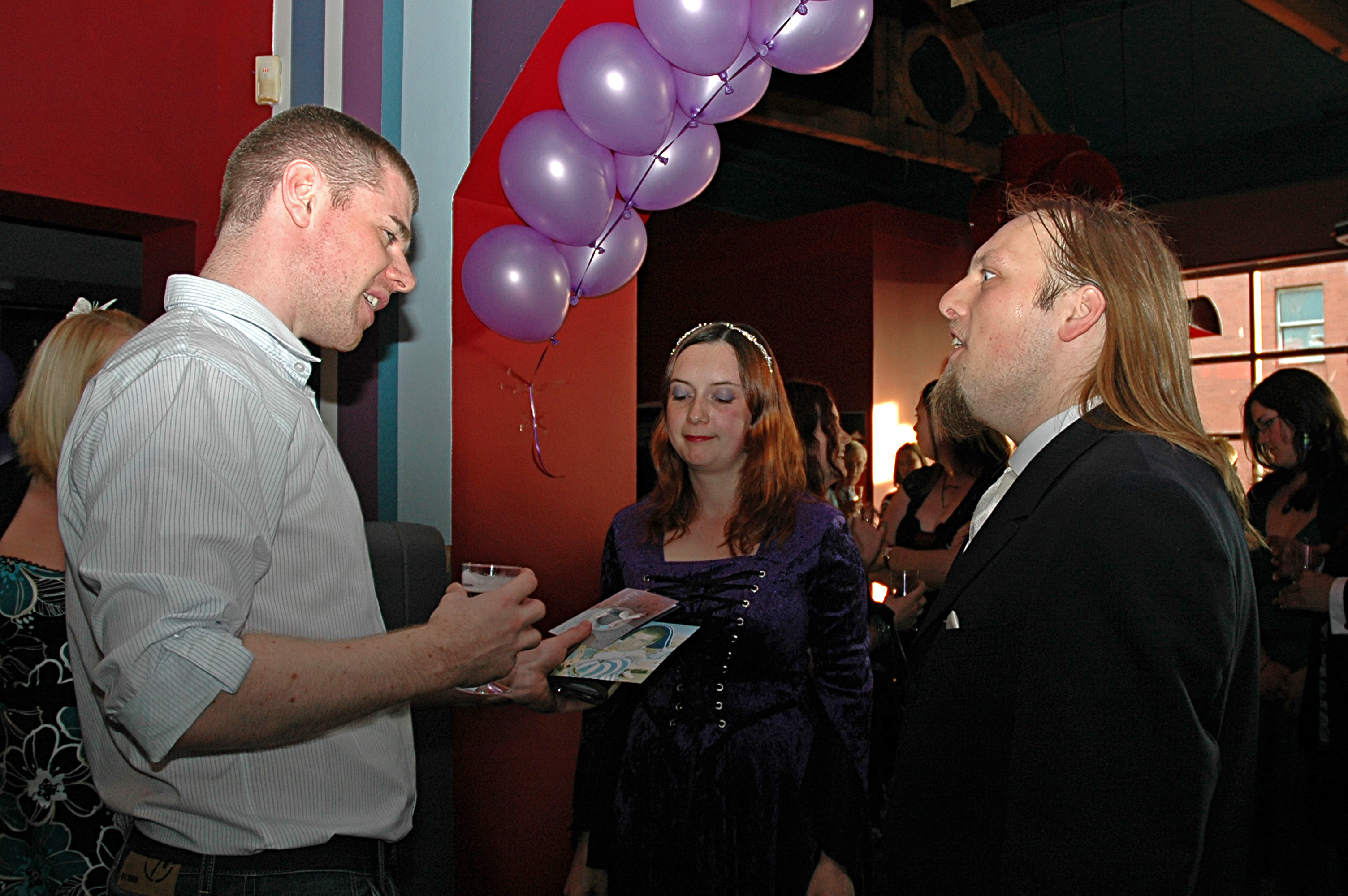 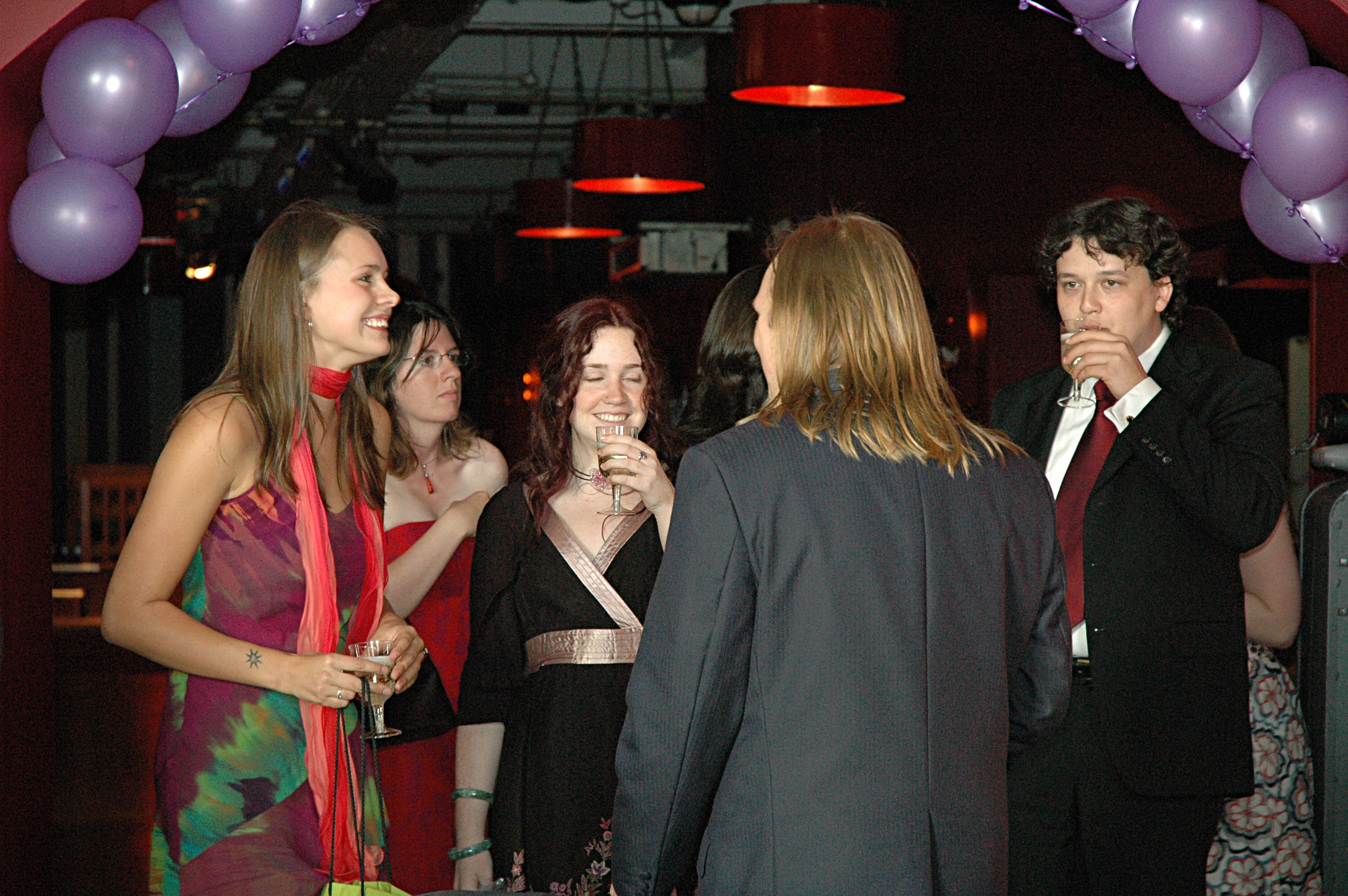 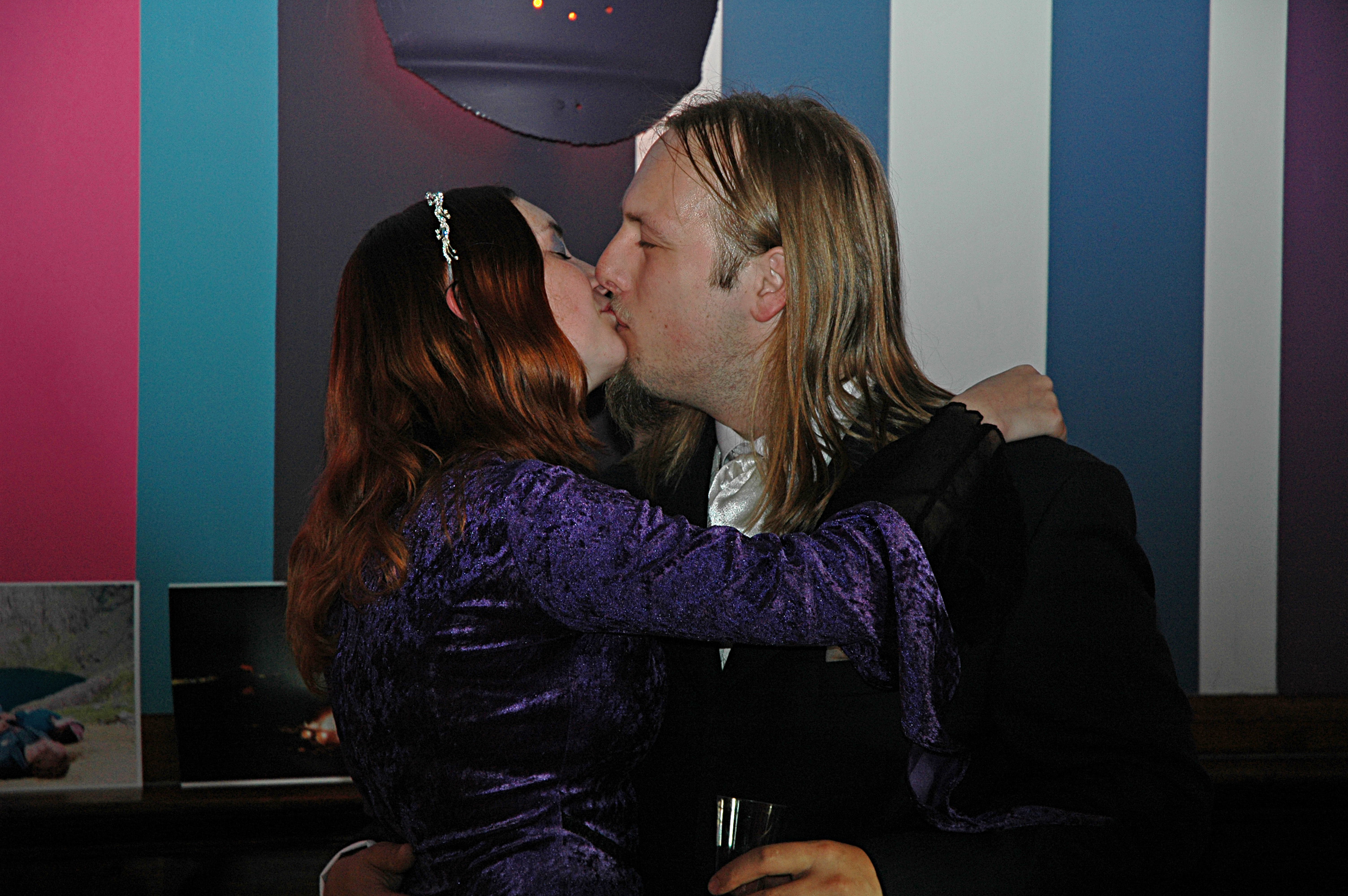 We began to collect people’s contributions for the QFrames – the large clip frames we planned to fill with mementoes from the event. These were many (so many, in fact, that when Jenny was filling them for us while on our QMoon, later, she ran out of clip frames and some contributions have had to be overlapped or – where people brought multiple items – some have had to be left out entirely). We were overwhelmed by the thought and sincerity reflected in many of the items that are now in QFrames (some of which we’ve already mounted in The Cottage: others we still need to find room for!). Just off the top of my head, I’d like to draw attention to a few things (can’t possibly list everything here!):

And so on, and so on, and so on. There’s far more than we ever imagined we’d get: so much that the half-dozen A1-size clip-frames we brought were actually insufficient to contain them all! From the sweet to the nostalgic to the crazy, all of these unusual gifts (and the dozens not mentioned here) have really made us feel loved by you all: thank you all so much. 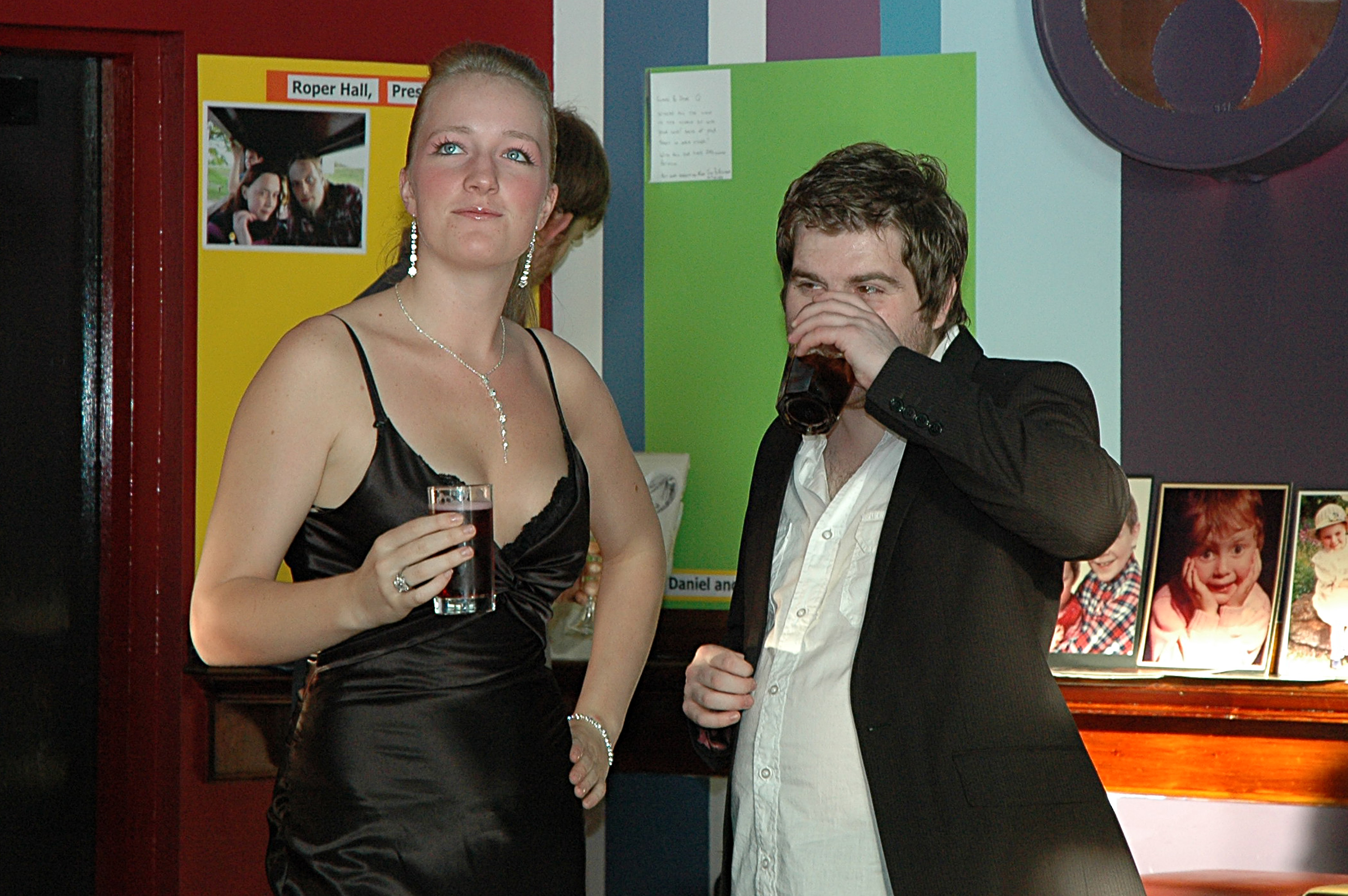 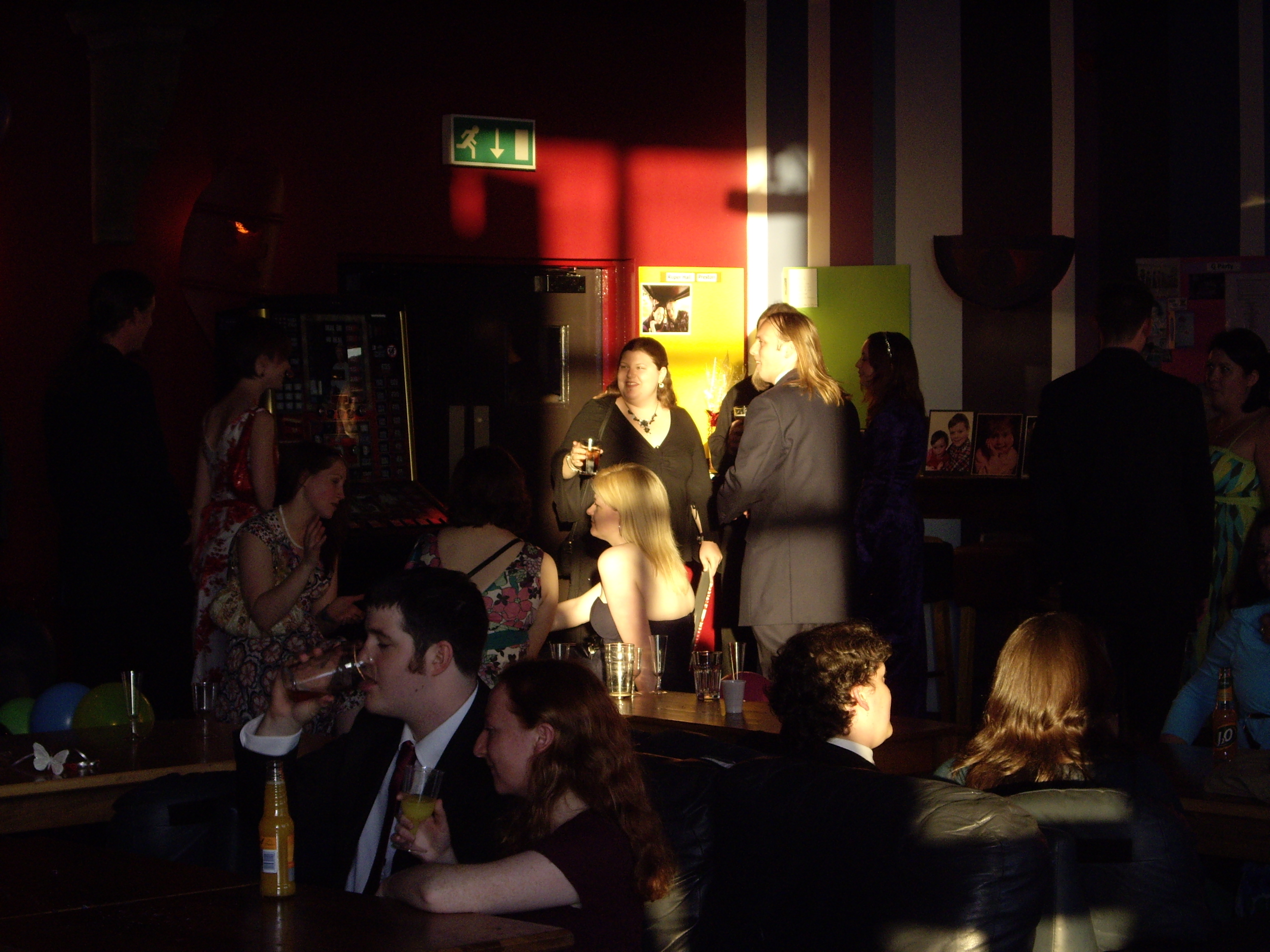 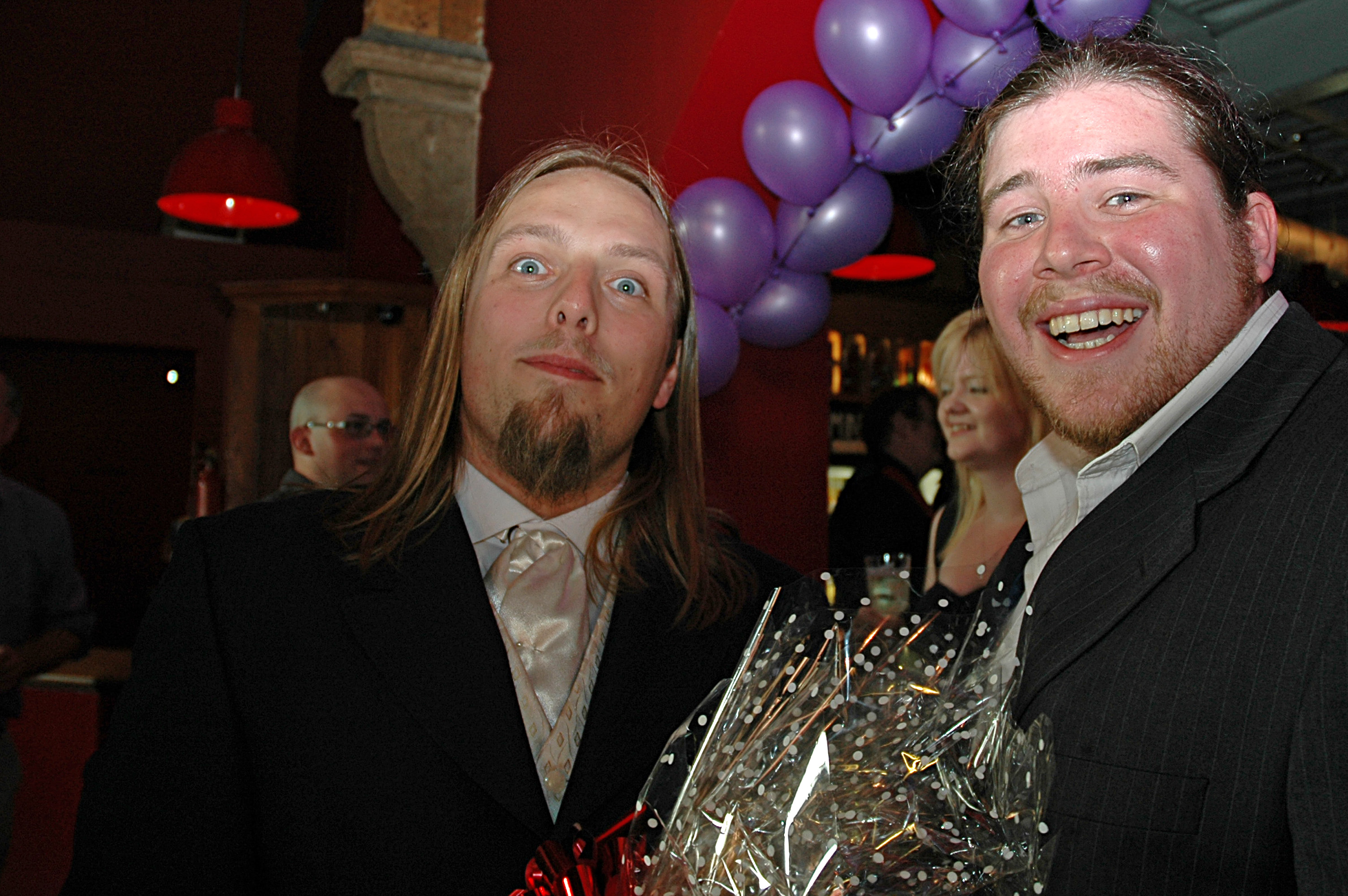 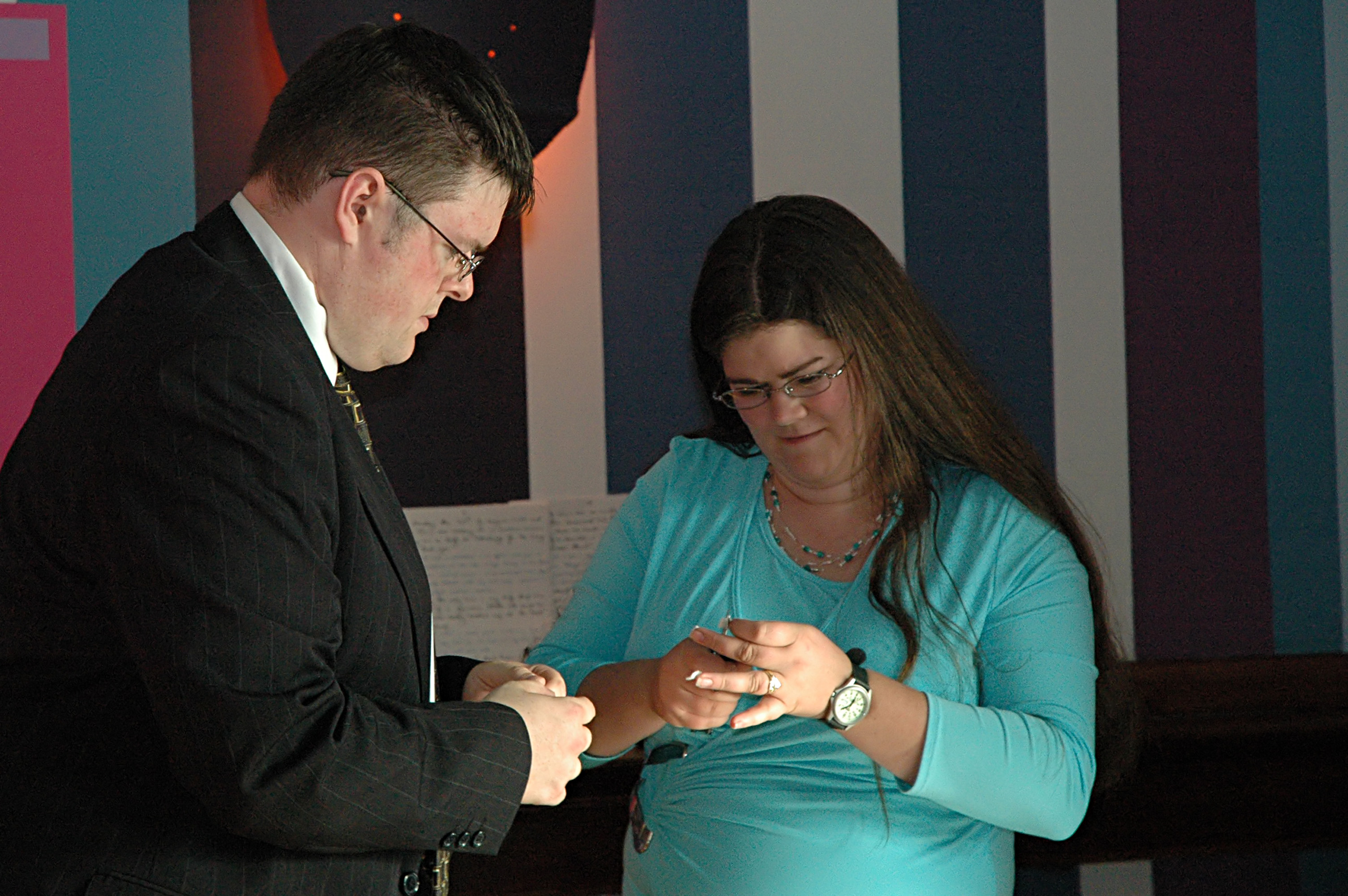 Thanks are also due to everybody who – despite our request to the contrary – brought more conventional gifts as well. In particular, we were surprised (in a good way) by the sheer number of bottles of champagne we were given. A side-effect of this – and of all the cake left uneaten from the party – was that when we returned from our “honeymoon” – QMoon – a week later, the only things we had in the house to eat and drink were cake and champagne. Oh, the horror!

Once everybody who was going to appear had appeared and gotten themselves a drink or two, we decided that it was probably time to get on with giving the speeches that are so obviously mandatory at this kind of event. We’d planned the order of events only the night before. Then changed the plan. Then changed it again. In any case, we’d decided that I’d introduce, in turn, Claire, my mum, and Claire’s dad, and then say a few words myself.

Claire would talk about how she and I first met – delicately censored, of course: the finer details of the actual story are not only more long-winded than is appropriate for a speech of the length that Claire wanted to give, but also aren’t so repeatable in polite conversation (if you feel like you missed out on some juicy details, see us after class). Claire spoke well about the early days and months of our relationship, addressing her audience well and taking the piss out of me just about enough (it turns out to be quite easy). 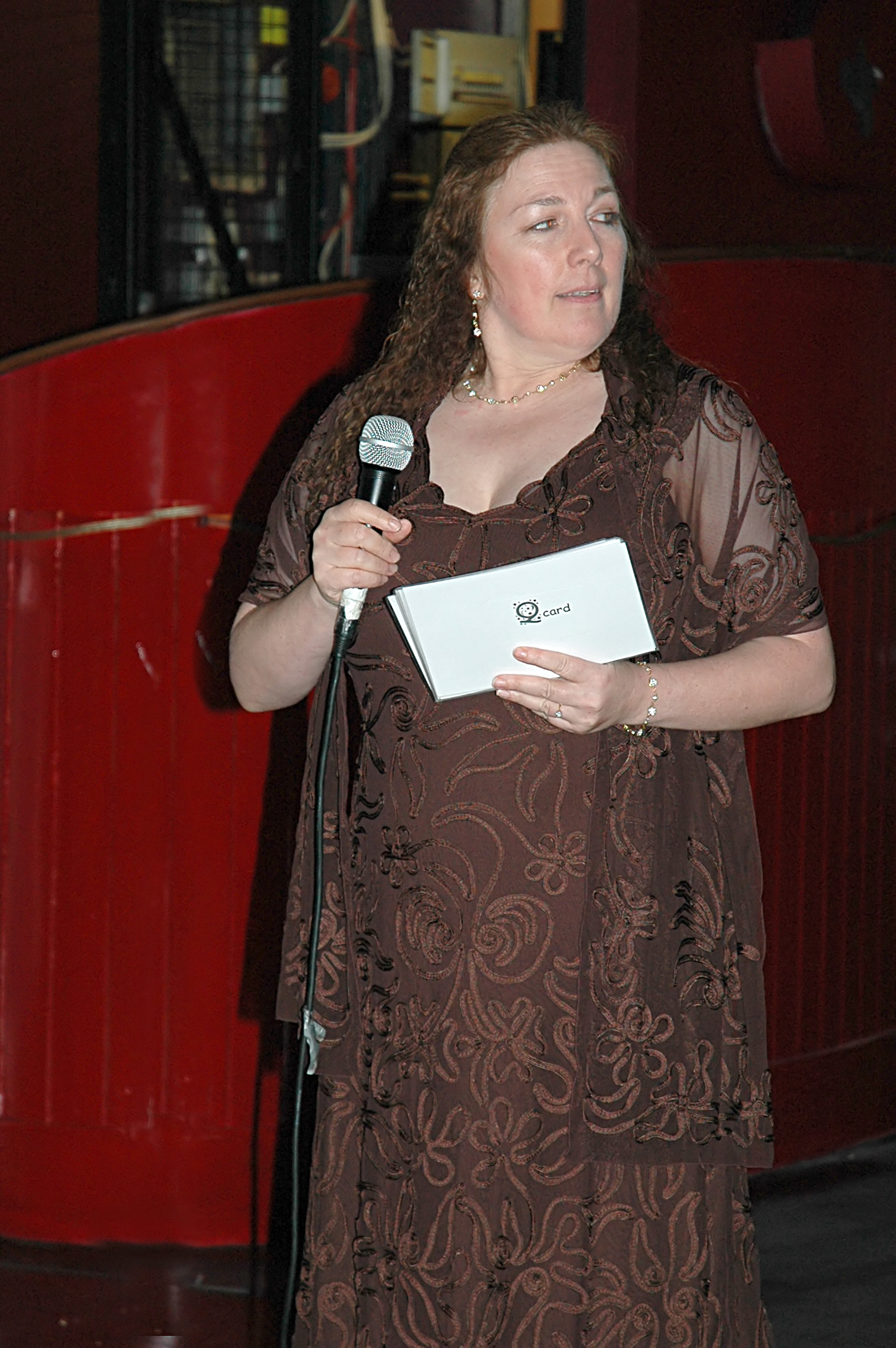 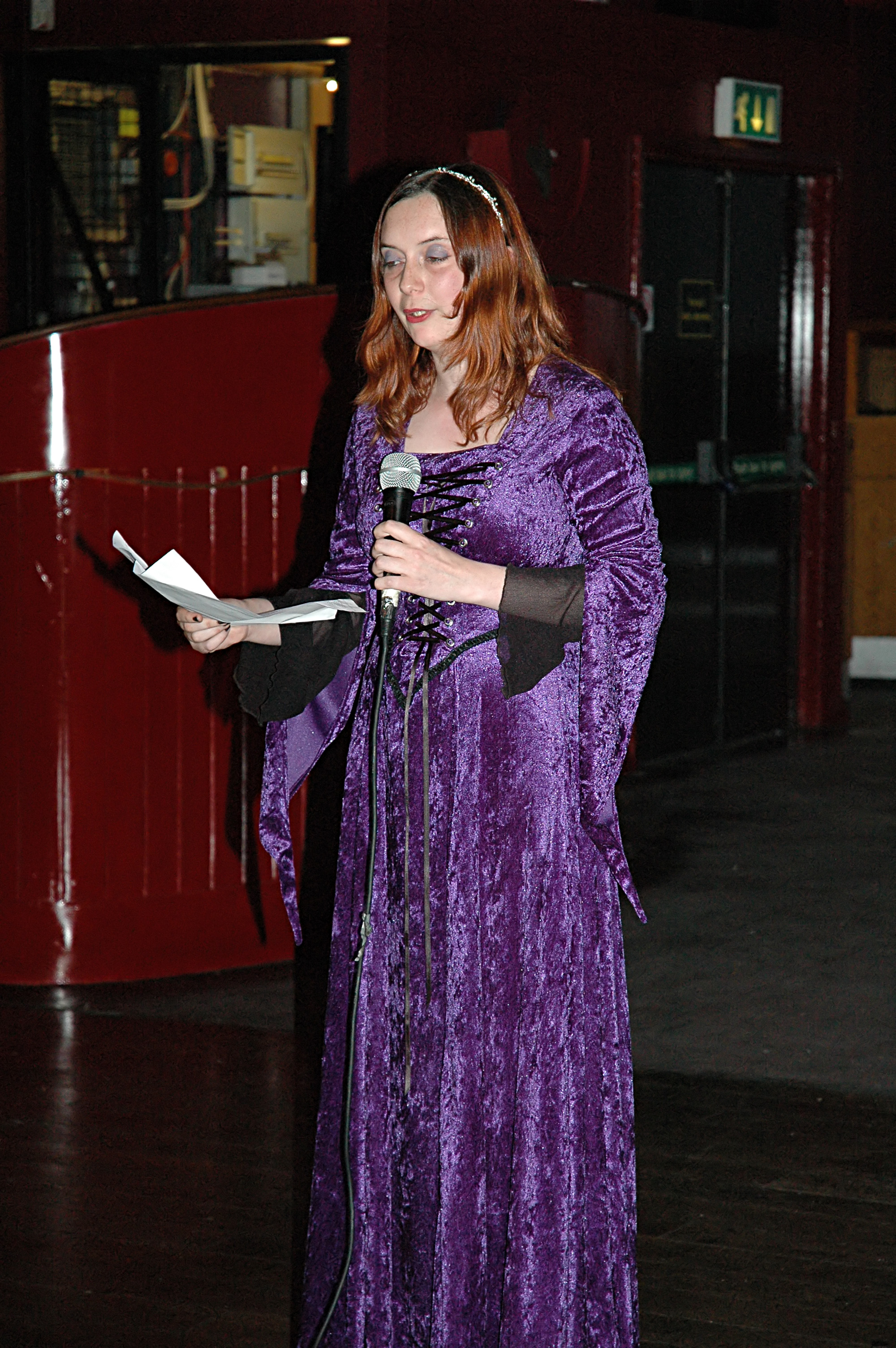 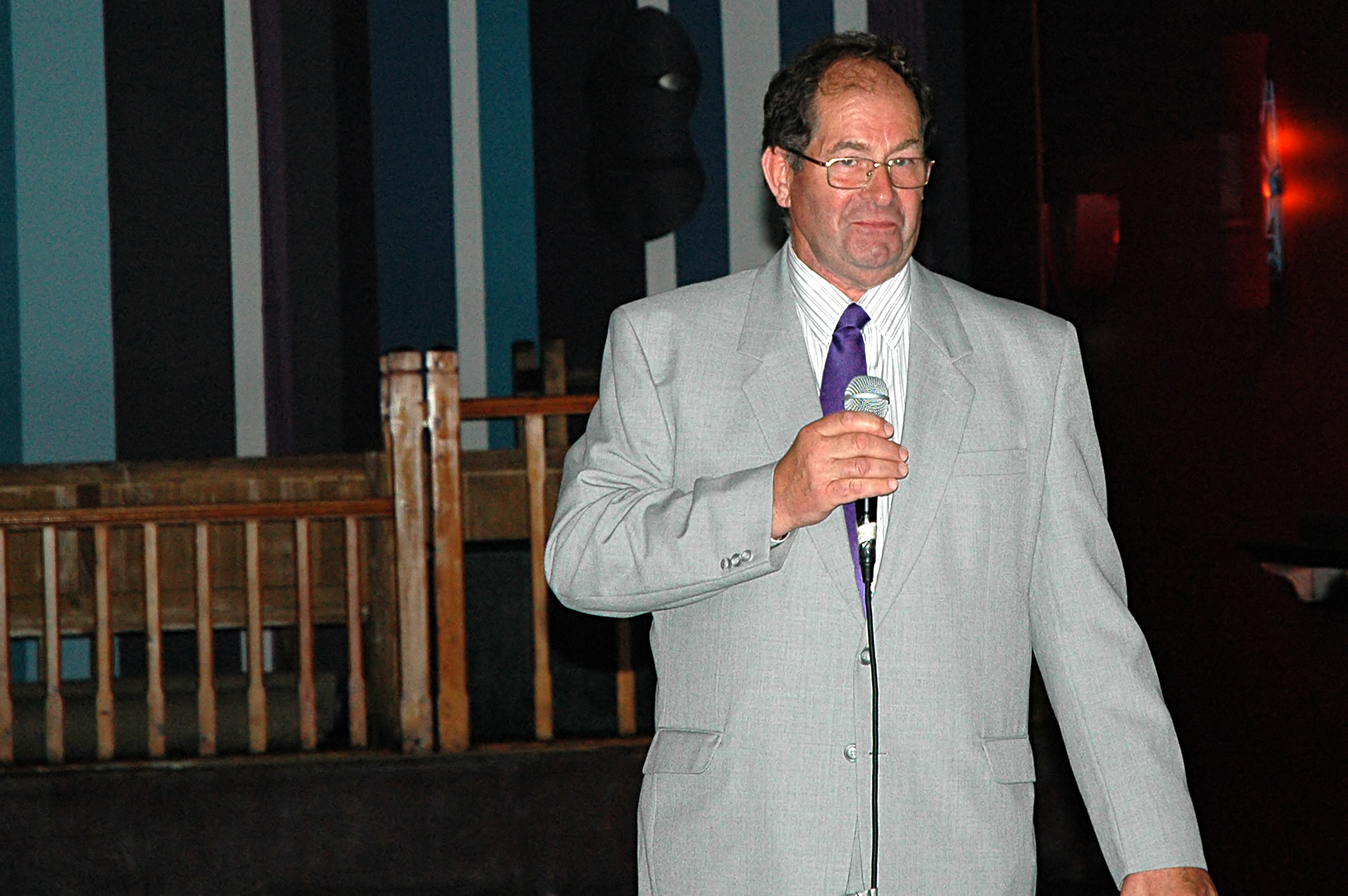 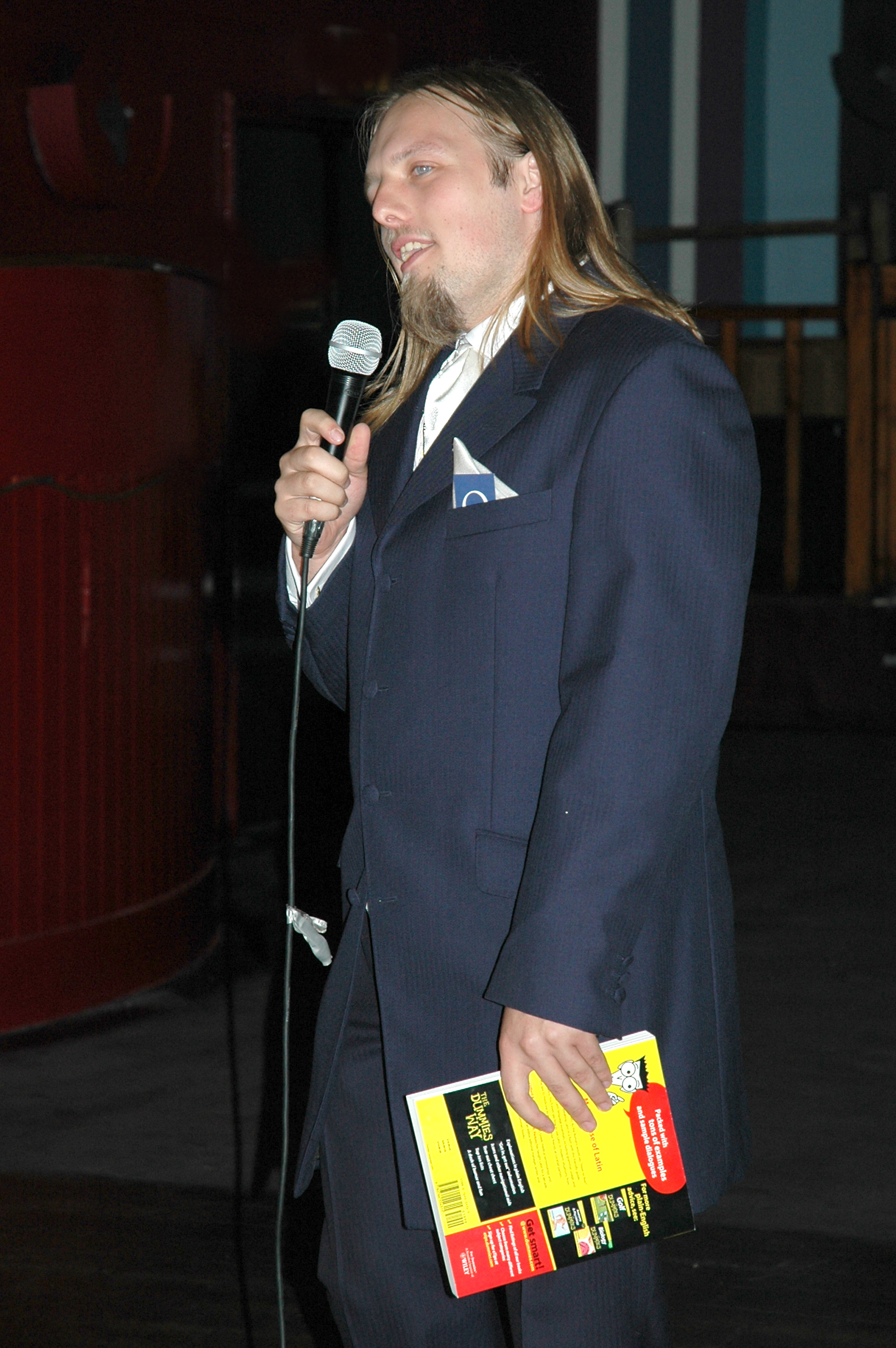 My mum was next. We’d decided between us that what she would like to talk about was family. Her speech was simply fantastic, and earned her a great deal of respect from many of my friends, based on the number of people who later came up to me and told me how “brilliant your mum is!” Despite a meandering into a discussion on the breeding of alpacas, her musings made their point: that families – defined not by blood or lineage but by groups of individuals bonded together by love – are one of the most fundamental building blocks of society as we know it, and that everyone in the room was, by Claire and I’s action and through Claire and I’s love for one another, joined and related as a huge extended family.

When everybody was done wiping their eyes and laughing about alpacas, Claire’s dad took the mic. He talked a little about Claire’s upbringing and her unusual ways, embarrassing her just slightly in the way that a modern father of the bride is expected to, before reading a poem that he’d written for the occasion. It talked about his respect for his daughter, and his love of her, and her upbringing, and then took a change in pace at the point in her life where her dad first met me: And what’s this I find? / A man in bed with a girl of mine! / Who is this, me’s a thinker’, / Who is this bounder? What a stinker! It gets better, of course, and finishes with lines asking me to take care of “his Claire” for the rest of her life. Which, longevity-permitting, is my plan. 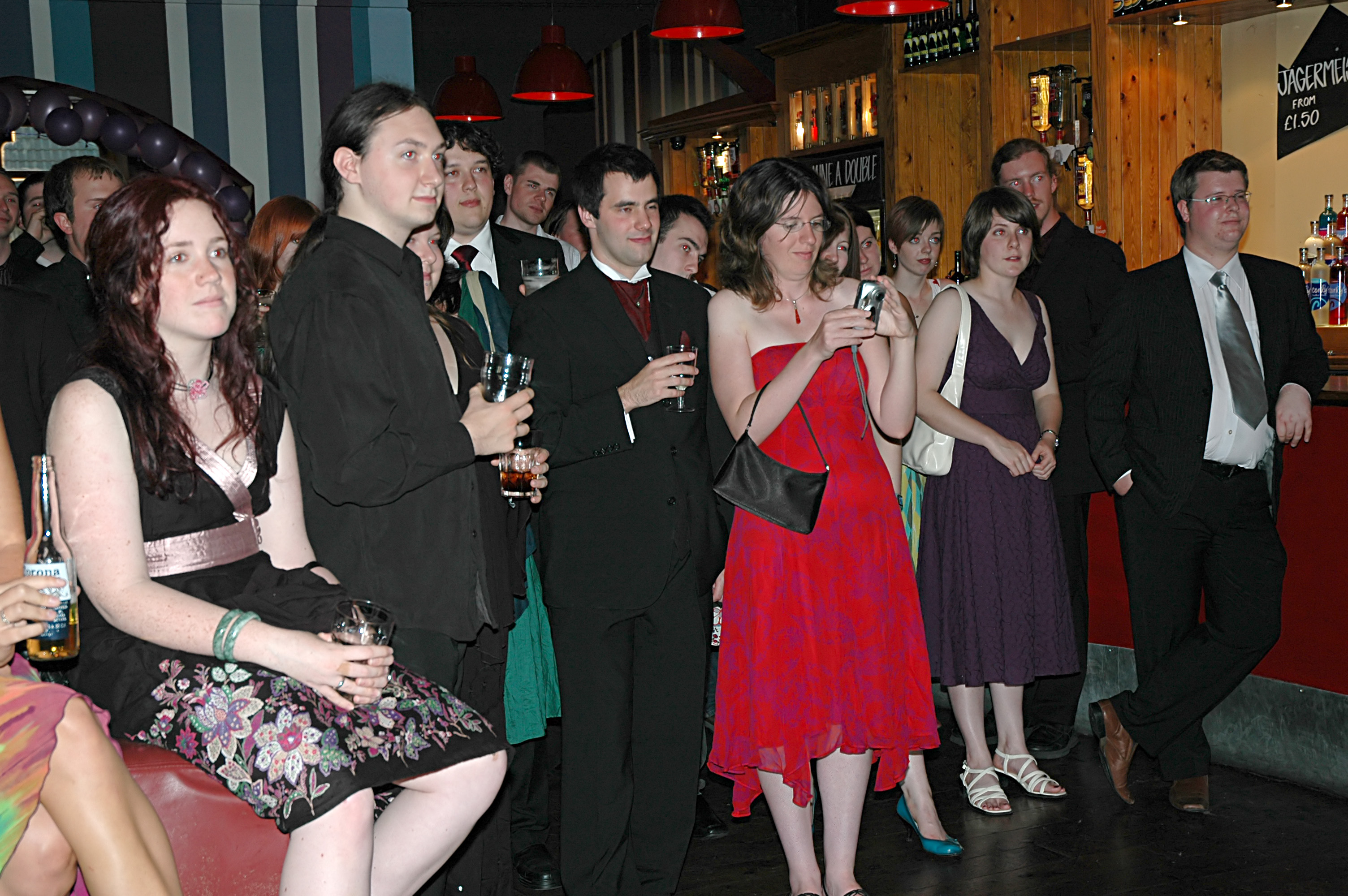 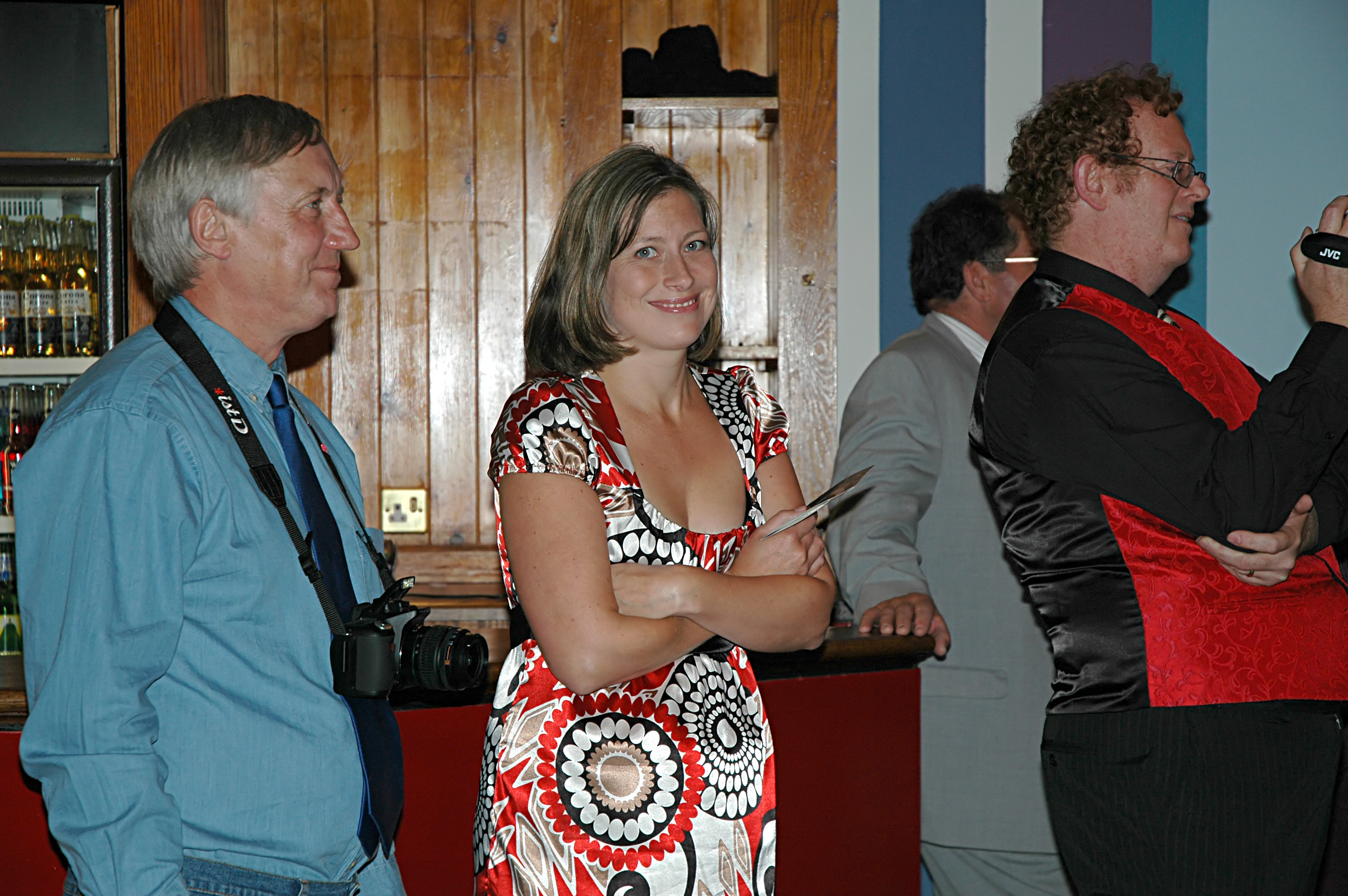 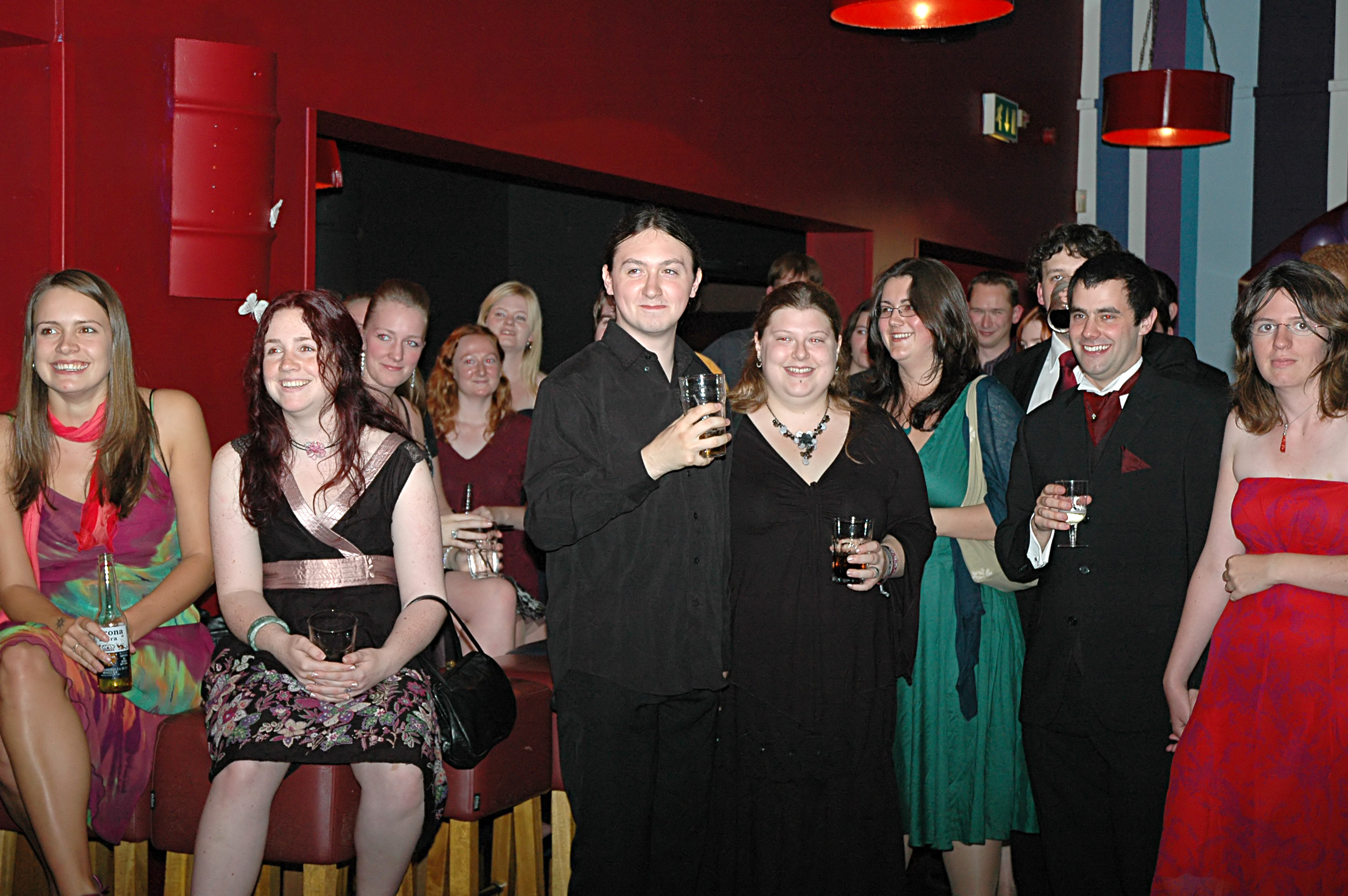 Finally, I stepped in to talk about Claire and I’s unusual and conversation-inspiring name change: why we did it, what it means, and how we came to choose the letter Q above all the other letters in the alphabet and, in fact, all the other combinations of letters that we could have possibly considered (I still think it would have been cool to change my name to Plugh Xyzzy – pronounced pl-urh zuzzie – and if you understand why it’s such a cool name then you’re as sad and geeky as me, and when you say it in your hollow voice, nothing happens anyway). My speech came across okay, I think, not helped by the fact that I’d put off writing it until the day of QParty – something which, in itself, wouldn’t have caused me any problems, if it weren’t for the fact that I had to spend the afternoon cleaning up and otherwise preparing the venue.

That’s when we opened the buffet. 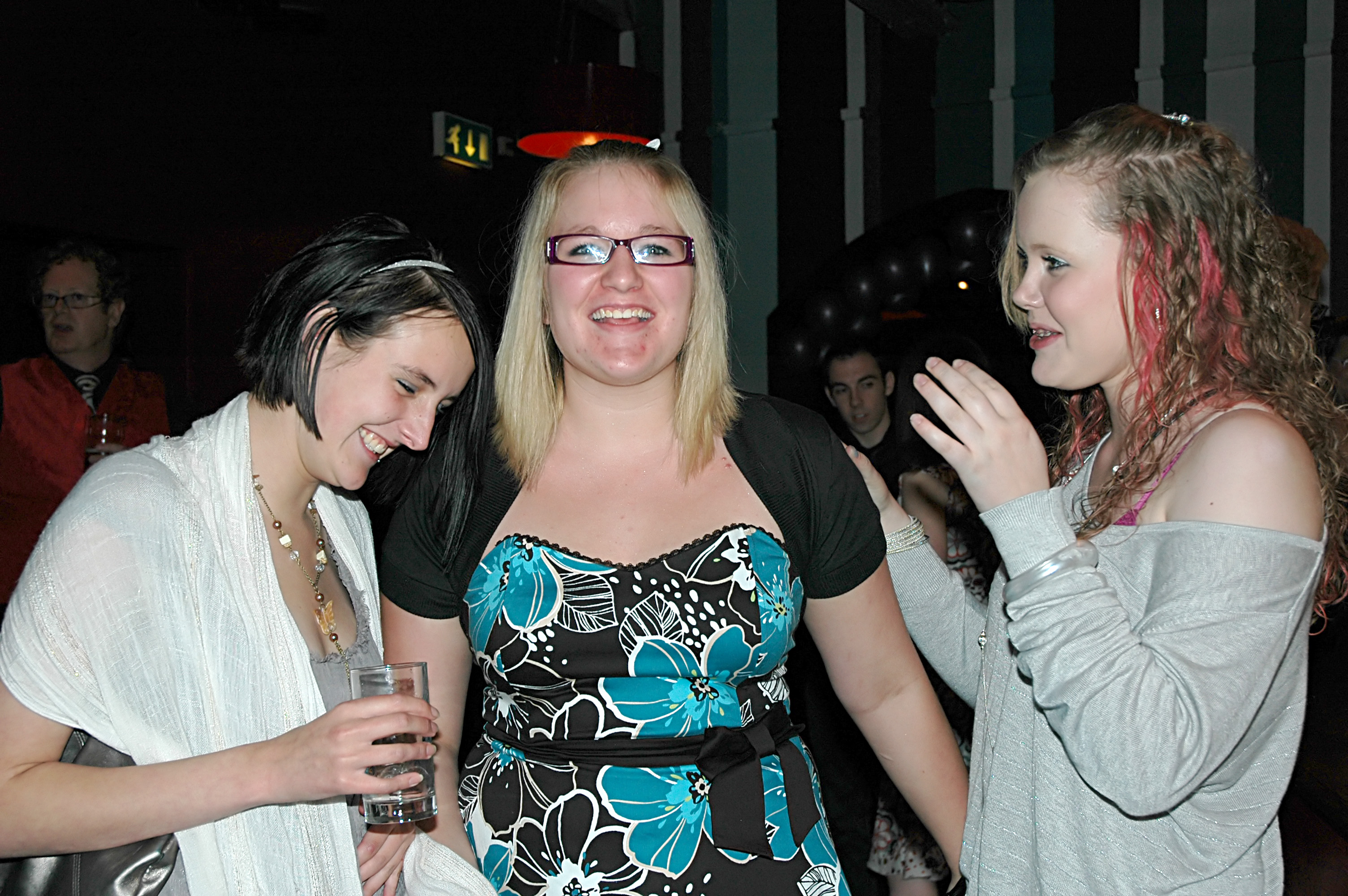 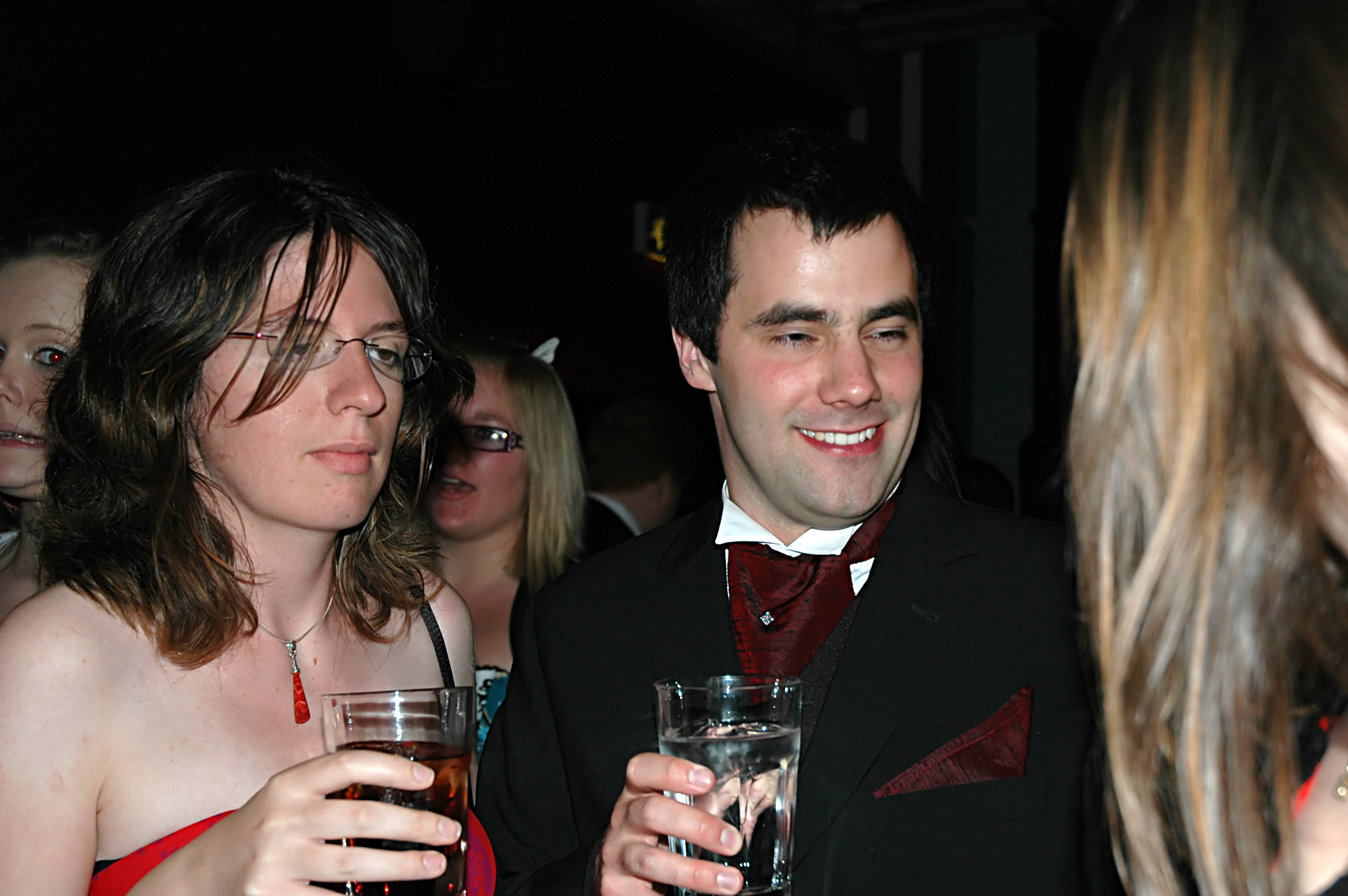 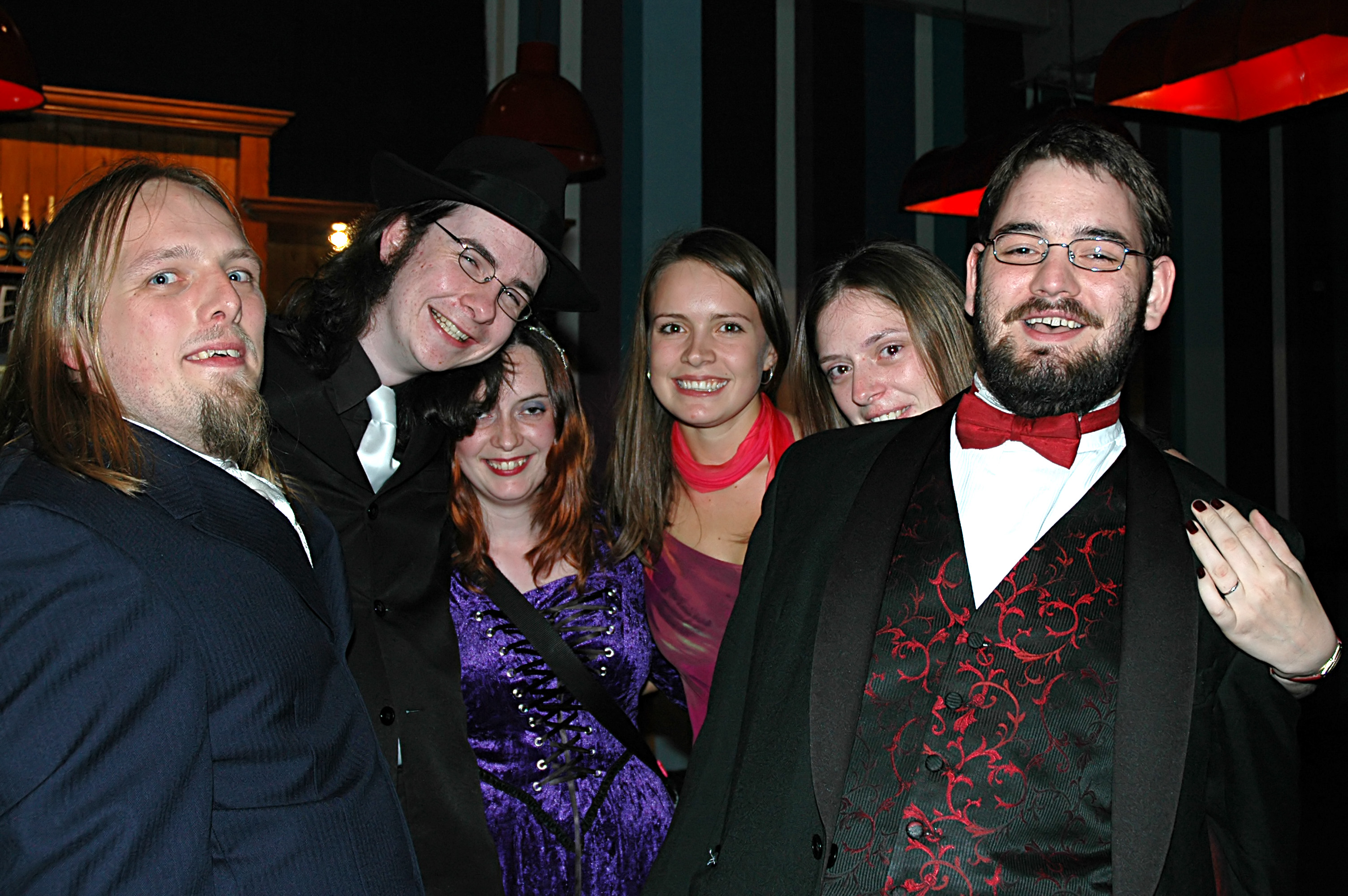 My sister, Becky, had offered to take charge of catering and other tasks, and, with the help of one or two volunteers, had assembled a fantastic spread of foodstuffs, all carefully labelled to indicate whether or not it was “meaty” or “veggie” (curiously, these signs were later seen being worn as badges by party guests). It took a reasonable amount of time for everybody to be serviced at the buffet queue, not least because several of our friends – who are more excited by buffet food than others – had managed to get back into the queue for a second helping before other guests had even got their first portion yet! Nonetheless, there was still a little food left at the end, and not just salad and other things that everybody hates, so I think Becky and her team got the quantity of food about right. 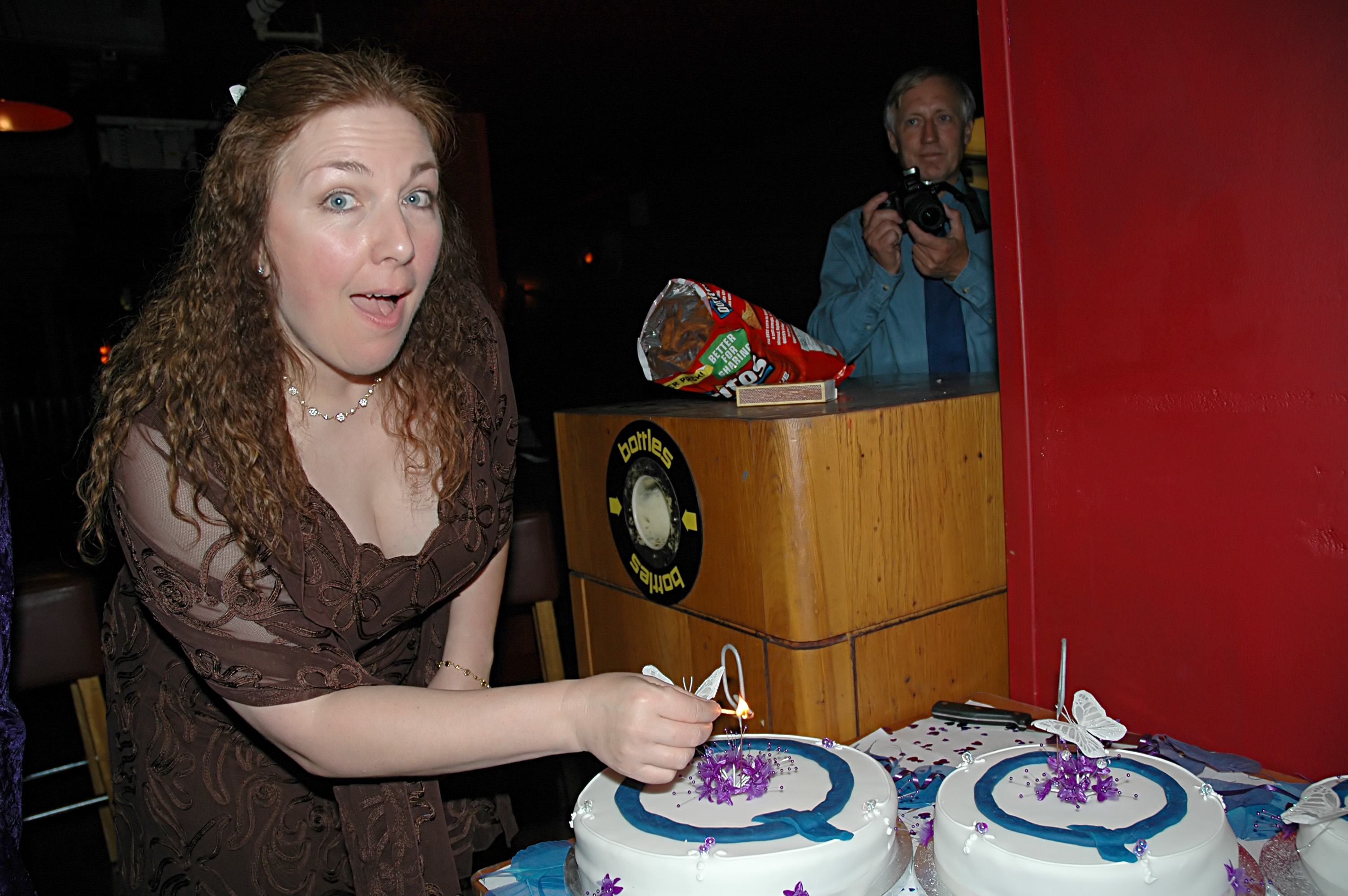 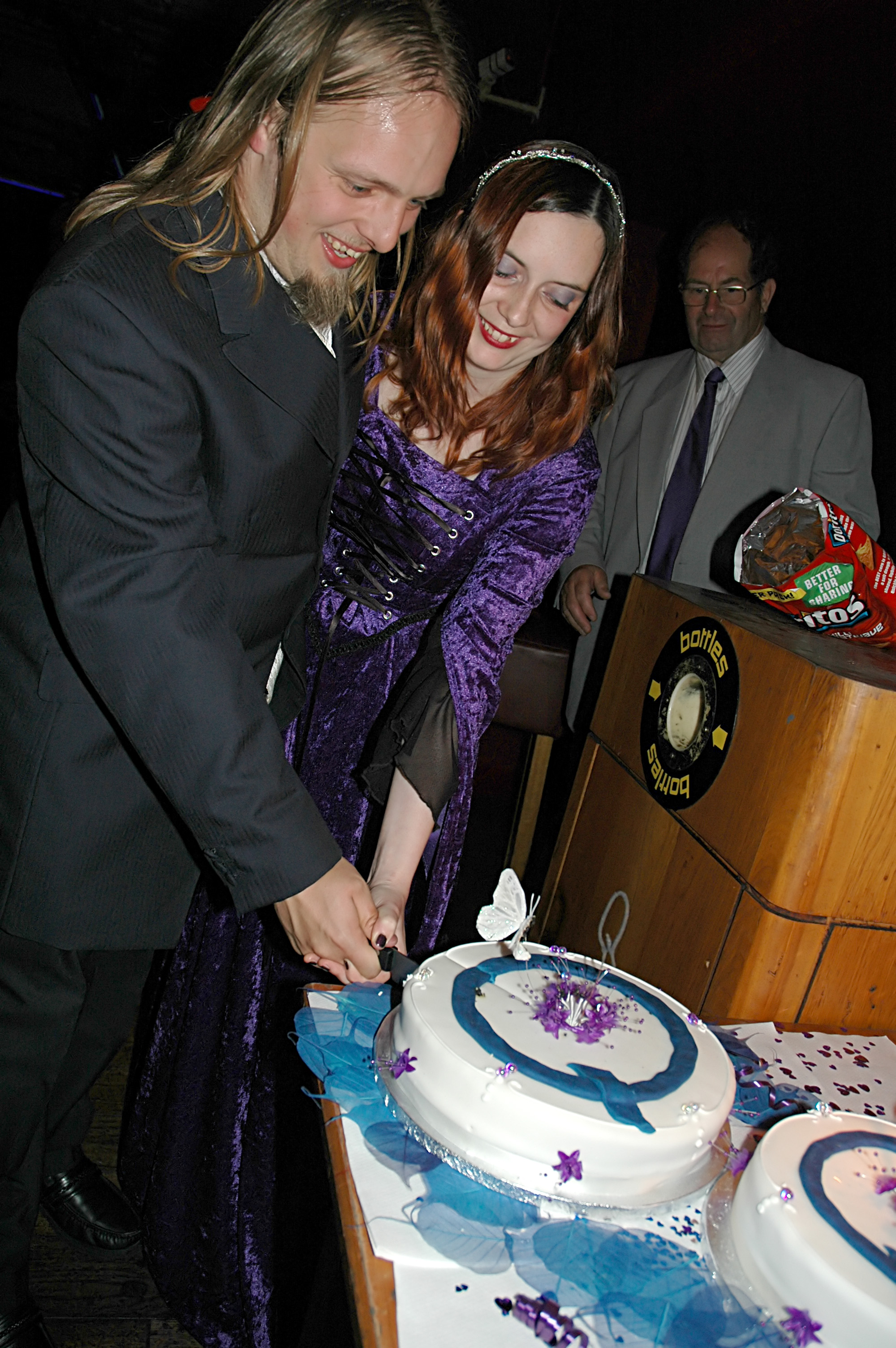 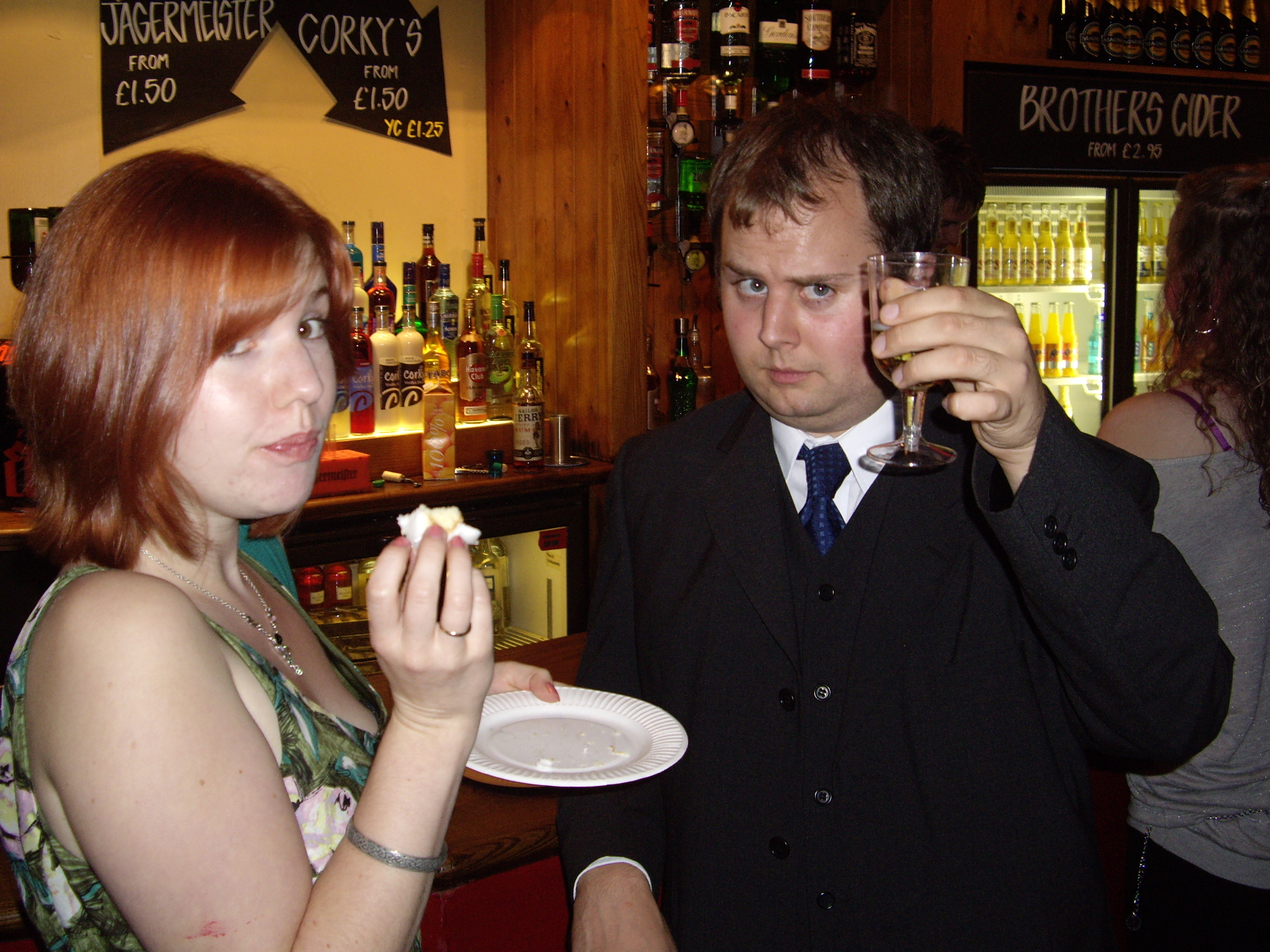 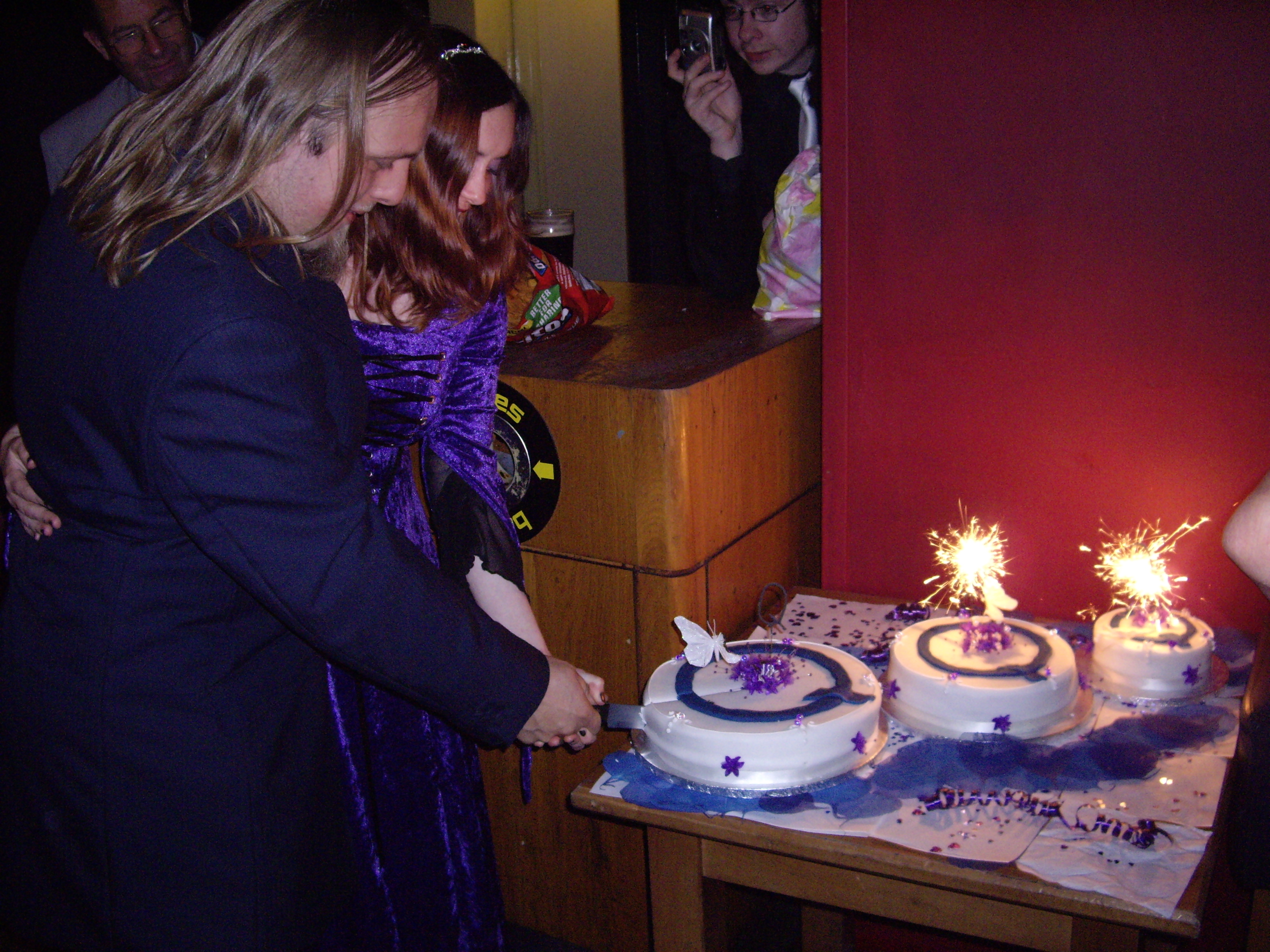 Finally, having done all of the complicated and stressful (but still fun!) bits of the party, Claire and I could get on with enjoying the celebration ourselves. We tried to make time to talk to and sit with everybody who came, but it was difficult to spend as long as we’d have liked talking to some of the people we see less often than we’d like, because there were so many of them. Nonetheless, the atmosphere was fantastic and the experience unforgettable. At one point, Claire and I were sat at a table with a group of people who, three years ago, wouldn’t have looked out of place all sat around a table in a pub in Aberystwyth, but have since moved elsewhere… and just for a moment, I forgot that we weren’t at some early Troma Night or sat in the Ship & Castle playing Chez Geek. Quite remarkable.

As the night wore on and the music became more recognisable a good number of us migrated to the dance floor, spending much of the evening leaping around and sweating excessively in the warmth of our suits and dresses. Another party arrived (after 10pm, the management opened the doors of the venue and turned it into a regular nightclub; although it didn’t attract much traffic anyway, being a student bar outside of termtime) in fancy dress, and somebody must have been tipping them off about the nature of our event, because several people in strange costumes came over to congratulate me and to offer to buy me drinks.

The evening wore on, and many of the guests excused themselves, but for a small group of particularly hardcore party people who stayed on with us until the very end. All in all, it was a fantastic night. Thanks again to everybody who helped to make it a success, to everybody who came, and to everybody who sent well-wishes even if they couldn’t come. There’s loads of photos up now in QParty Gallery – here are some of my favourites (with captions):

There are loads more, of course, and so many of them are so good. Take a look in at QParty Gallery (or at the lower-quality ones on Facebook) and see for yourself.

While on the way to a stag night in Edinburgh, Dan stops to perform magic in Preston and is surprised…

Apologies for potato quality. Smartphones weren’t very smart yet in 2005. A camping-themed social gathering for members of an Aberystwyth…

Pompeii was simply stunning; so much more than I’d expected. For a 2000 year old town it’s in excellent condition:…

Beth wrote: Last night I had an utterly bizarre dream in which I was at the Q party, which for…