Well, it’s been three weeks since QParty (and the heap of blog posts it generated) and about thirty weeks since Claire and I changed our names to Q, and I suppose it’s time to write my piece about QParty itself – I was stalling on doing so until I’d uploaded a majority of the photos from the event to QParty Gallery, which I’ve now done (if you’ve got photos we haven’t, of course, we’d love copies!).

I suppose the story of QParty started many months ago, when we decided – after having it suggested to us many, many times – that we wanted to have such a party. We’d talked about doing it before, when we first talked about changing our names someday but long before we talked about what we would choose, and we’d always come to the conclusion that while marriage wasn’t for us, we were both big fans of weddings (and, in particular, wedding receptions), so a party was probably on the cards from day one.

We wanted a party for a few reasons. The first and most important is, of course, that we love parties and we wanted to be at the centre of one. Another important one is that we genuinely wanted to celebrate our relationship, because we think it’s a pretty damn good relationship and it’s worth celebrating. Yet another reason was that we wanted to show the (few) people who were holding out on a wedding that really, this is it: this… what we have… is our relationship, and we’re perfectly happy with it, and we don’t feel the need to wear little gold bands or big expensive dresses to justify it.

It was exciting. It was also tiring. Did you know that all of the invitations we sent out were hand-calligraphed by Claire, the “invitation codes” and envelopes hand-written by me (no thanks to a complete failure to find windowed C5-size envelopes in Aberystwyth). It’s surprisingly hard work, even when you do try to make a romantic evening or three in of it with a bottle or two of wine. We’d chosen a venue in Preston, of course, before we ordered the invitations. We chose to hold the party in Preston because it’s central location makes it immediately more accessible to a lot of people: the folks in Aber didn’t thank us, of course, but those who travelled from Norfolk and Lincolnshire (Claire’s family), Kent (parts of my family), Scotland (Kit and Fiona) and the North-West (loads of people) were probably very glad of the reduced journey time. Plus, it had the immediate advantage of being in the town with both of my parents’ houses, which gave the potential for loads and loads of floor-space on which people could crash, which turned out to be a huge advantage when a dozen or so of our less well-off friends (and some folks who just wanted to spend that little bit longer with us) descended upon them.

Thanks are due to SmartData, my employer, for the loan of their franking machine, which made posting all of the invitations a lot easier than lick-and-sticking. Briefly, when writing the database that powers the QParty website and our invitation-printing system, I considered implementing a WalkSort algorithm to help the post office deliver the letters by giving a box of envelopes to them already in the order they need to be to be rapidly sorted… but thought better of it. Damn, I’m a geek.

We travelled to Preston on the early afternoon of Friday 7th September, the day before QParty, carrying Matt P, Sarah and Paul (who needed a lift from Aberystwyth, so we offered them seats in Claire’s car in exchange for promises of help with party preparation). We didn’t anticipate seeing many other people on Friday, but we were wrong. Matt R, in his trademark way, “appeared” on our doorstep. Ruth and JTA rushed up to join us right after work, and we’d missed them so much that it would have been hard to justify quite how clingy we were about them were it not for the fact that we were surrounded by friends who know quite how close Claire and I’s relationship with JTA and Ruth is. Kit and Fiona (who, I’ve just noticed, use the same theme on their LiveJournal blogs) drove down overnight, and we did’t see them until the morning, but Matt R was kind enough to stay up to greet them and show them to their bedroom…

…but not before those of us who’d arrived earlier met up with my family, chatted about plans for the following day, and took a trip to the supermarket to get all kinds of party grub. Huge thanks to my mum who took charge of the catering. Later, many of us went to the pub for a couple of quiet drinks and a catch-up, and it was great to see folks that we don’t see so often and chat in the way that, a few years ago, we might have been caught doing in the Ship & Castle. 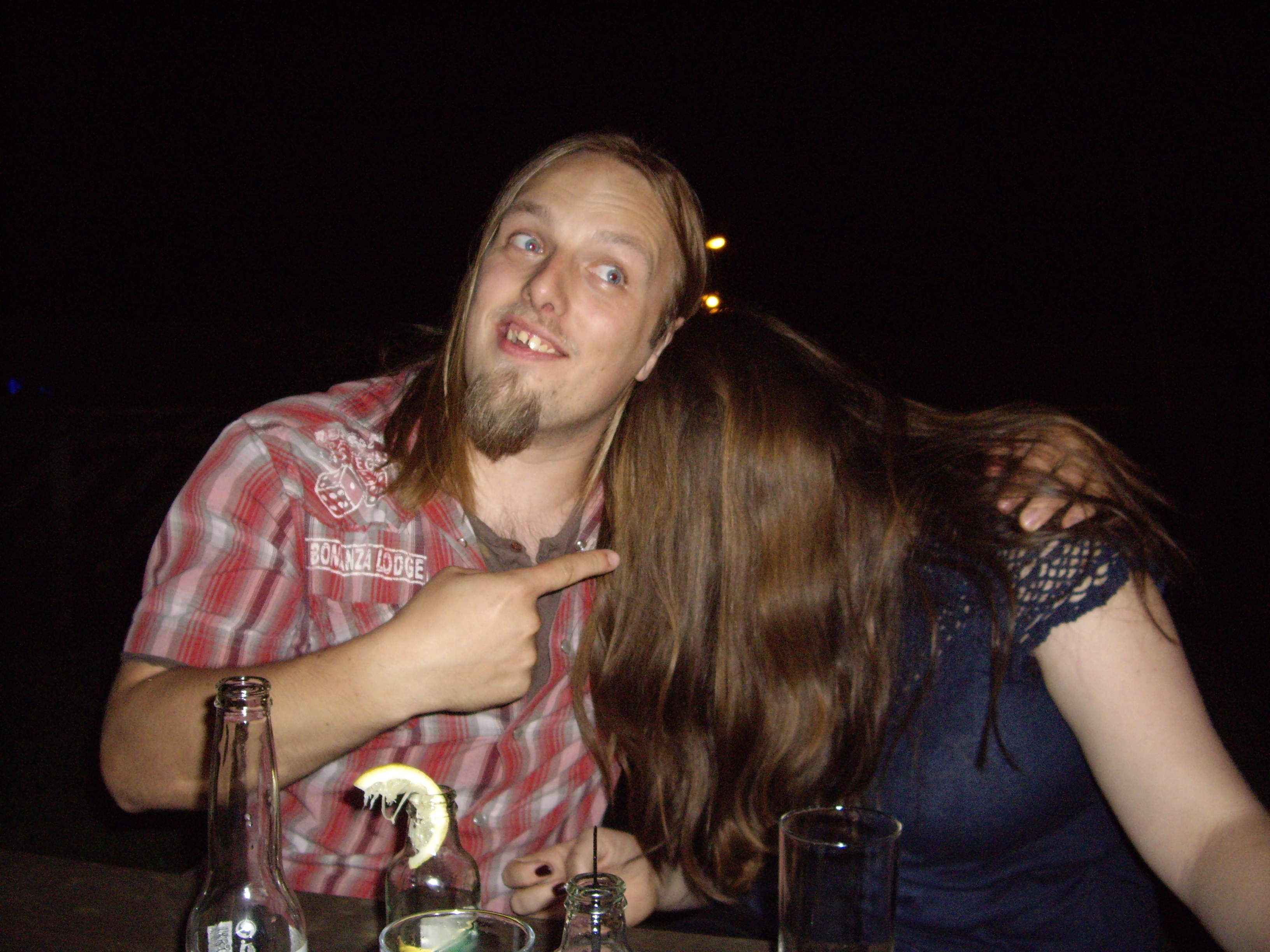 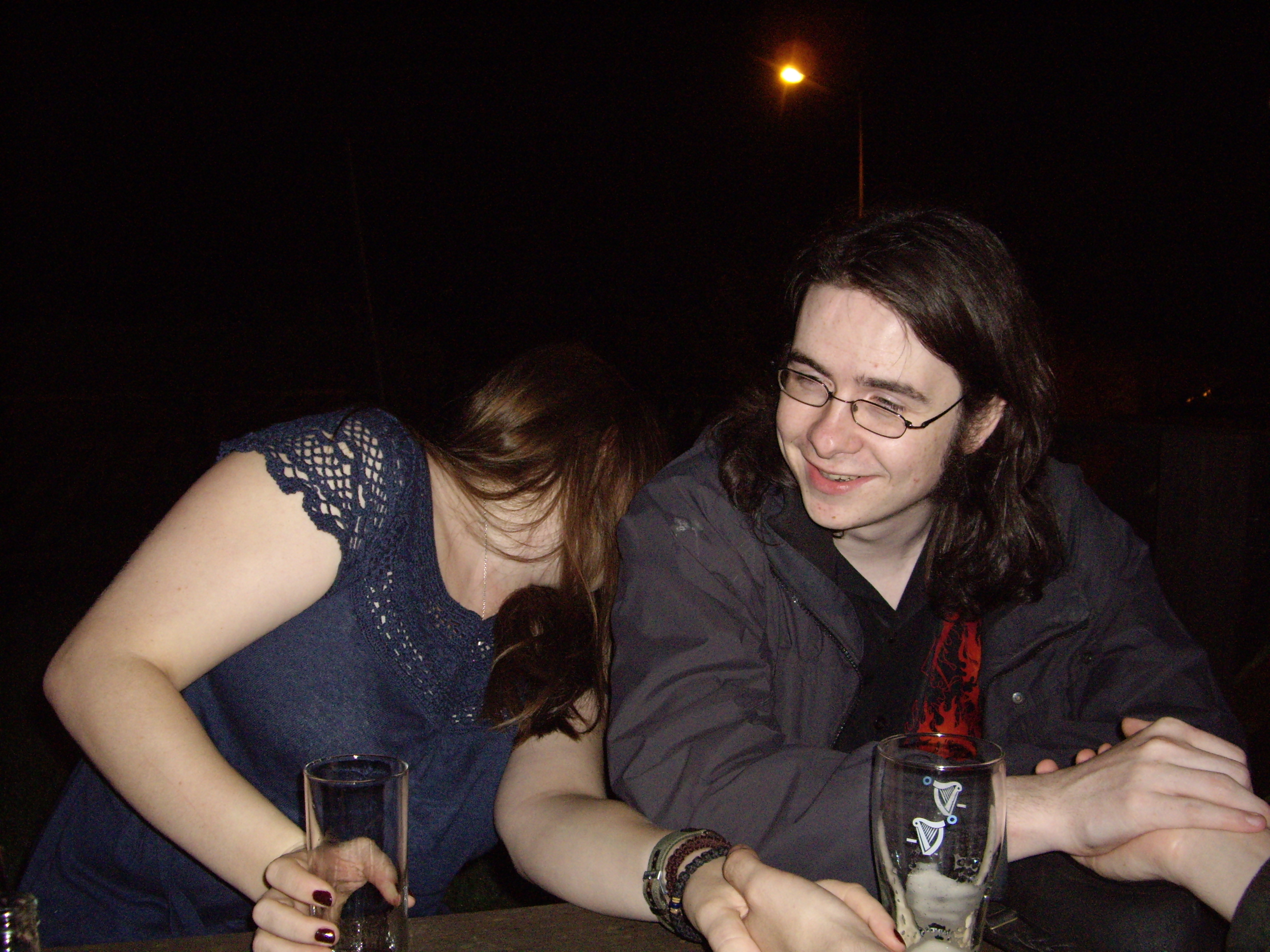 And so we came to QParty day itself.

The plan was pretty simple. We’d get up late in the morning and assign some jobs. A few folks from our team of early-arriving volunteers would be assigned to each task at hand: decoration (inflating balloons, tying streamers…), food preparation (making sandwiches, hedgehogs, chilling champagne…), etc. It could all have been so simple…

…but, of course, when we arrived at the venue early in the afternoon, we discovered that it was in a hell of a state of disrepair. All of the furniture was stacked in the corner, covered in dust. The bar was covered with glass. The floor was filthy. There was a pile of rubble in the dance floor. Evidently, the rennovations we’d been promised were not so complete as we had been led to expect. 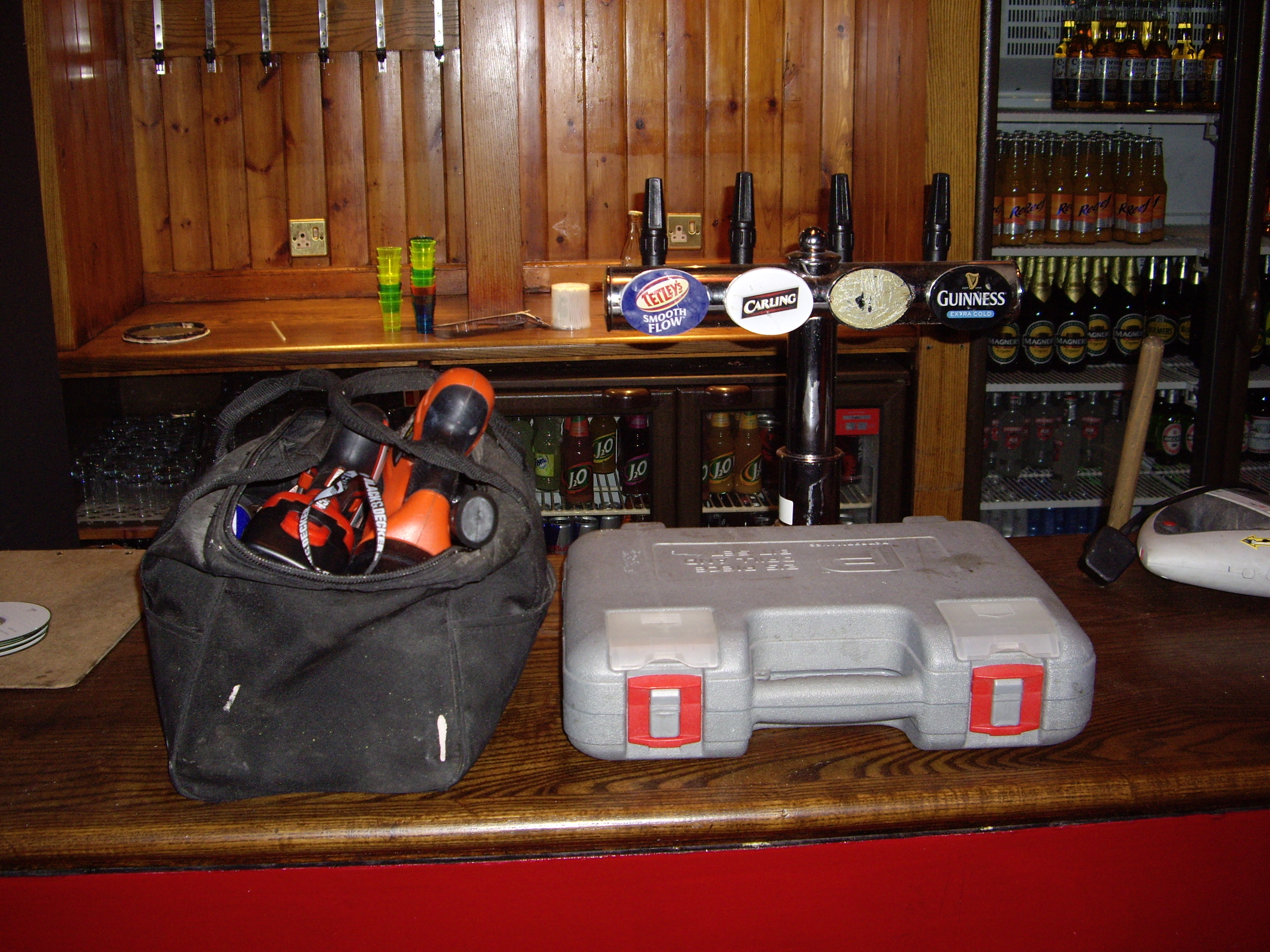 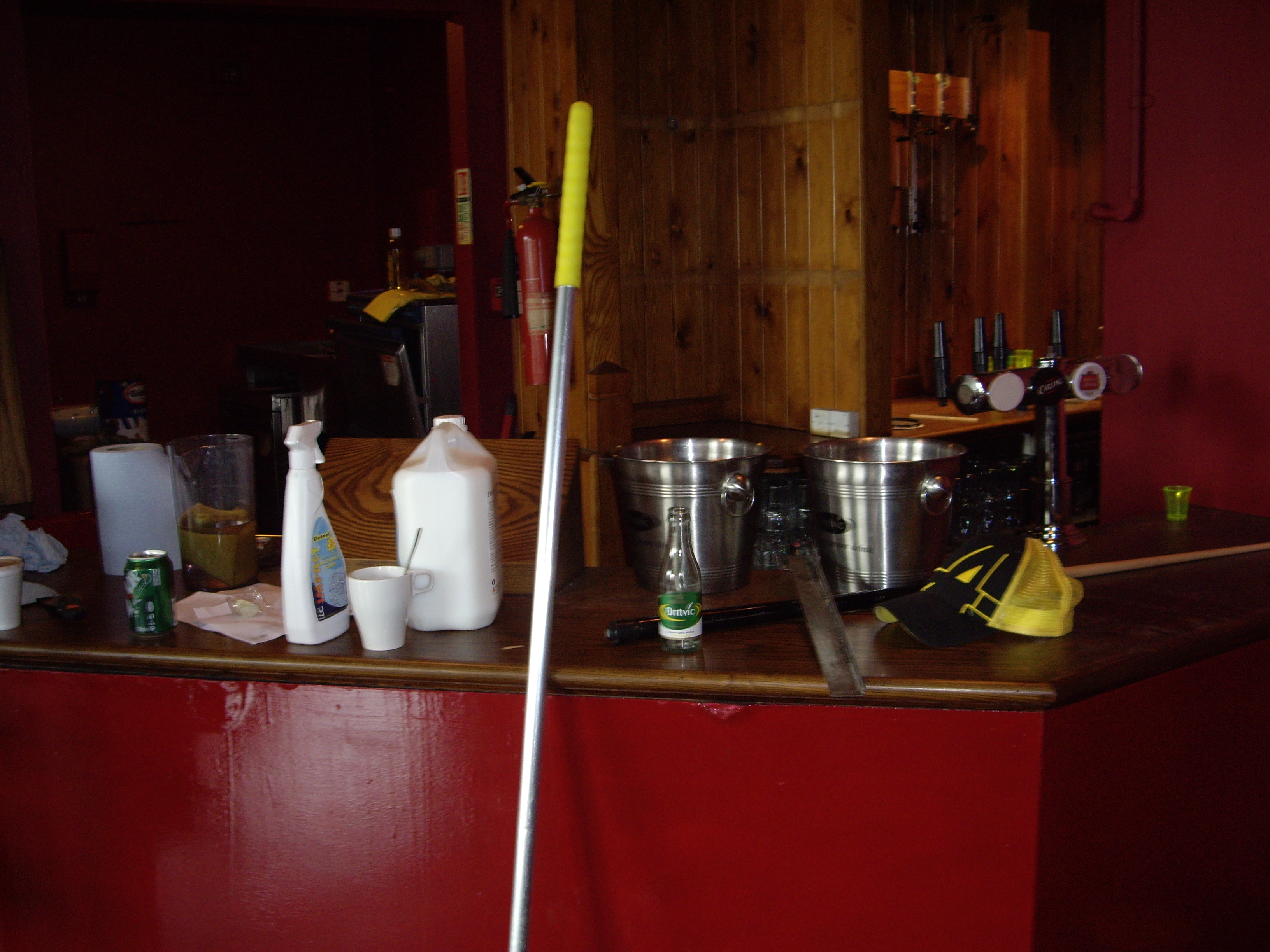 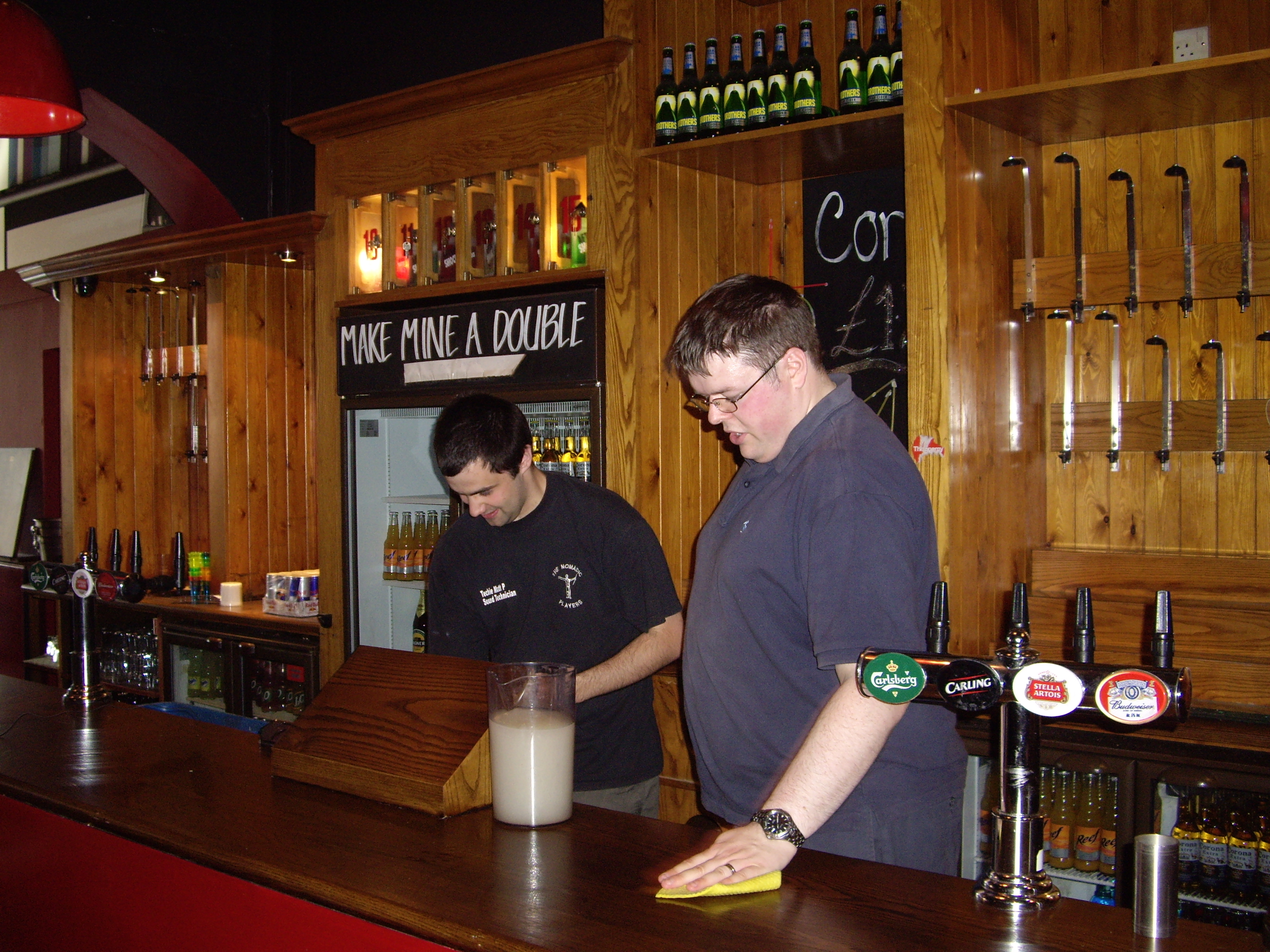 Within 30 seconds of my blog post going up about the situation, Jon – star that he is – and Hayley were on their way to Preston to help with the tidy-up effort. Hayley, in particular, did a stirling job of clearing up the mess that was the stairwell (I’m sure I’ll never know where she found the vacuum cleaner that the bar staff claimed didn’t exist, and I’m still unsure where she moved that wooden pallet and the shipping crate on top of it). When we started to make progress, our friends and family switched to the job of food preparation, and all was beginning to take shape. By half past five – half an hour before the party was due to start, the tidy-up team were starting to relax and get changed into their various party wear. 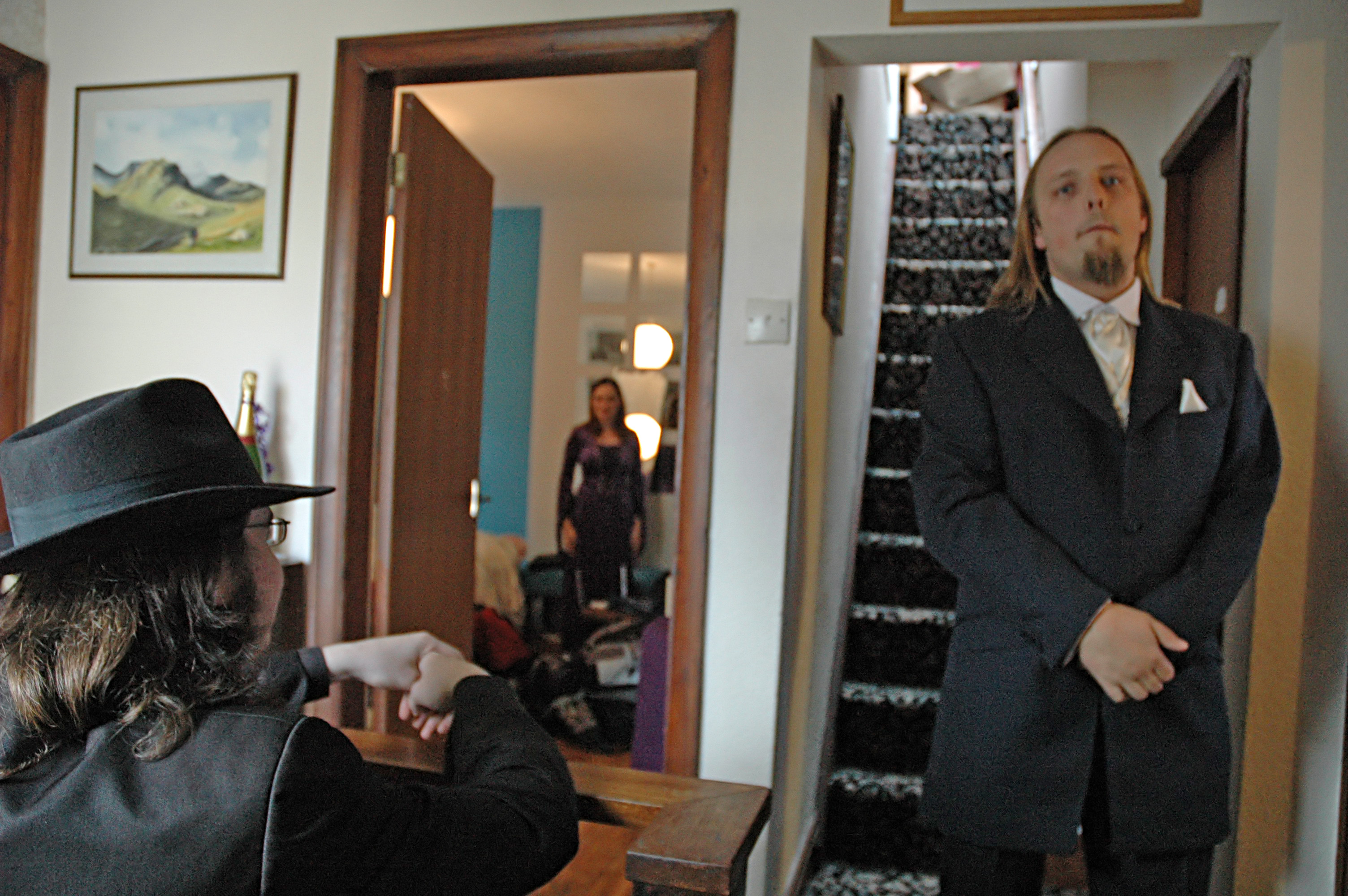 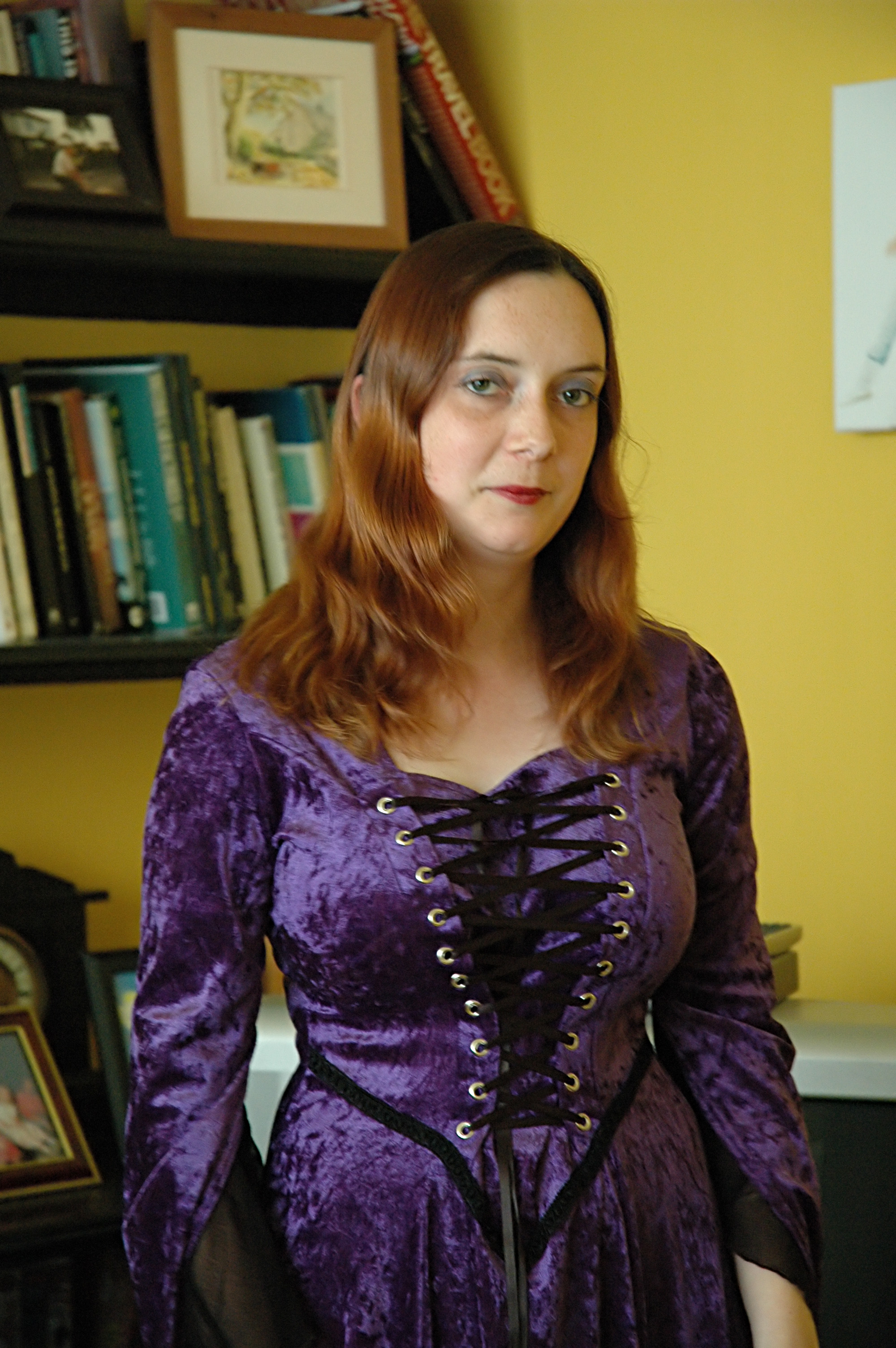 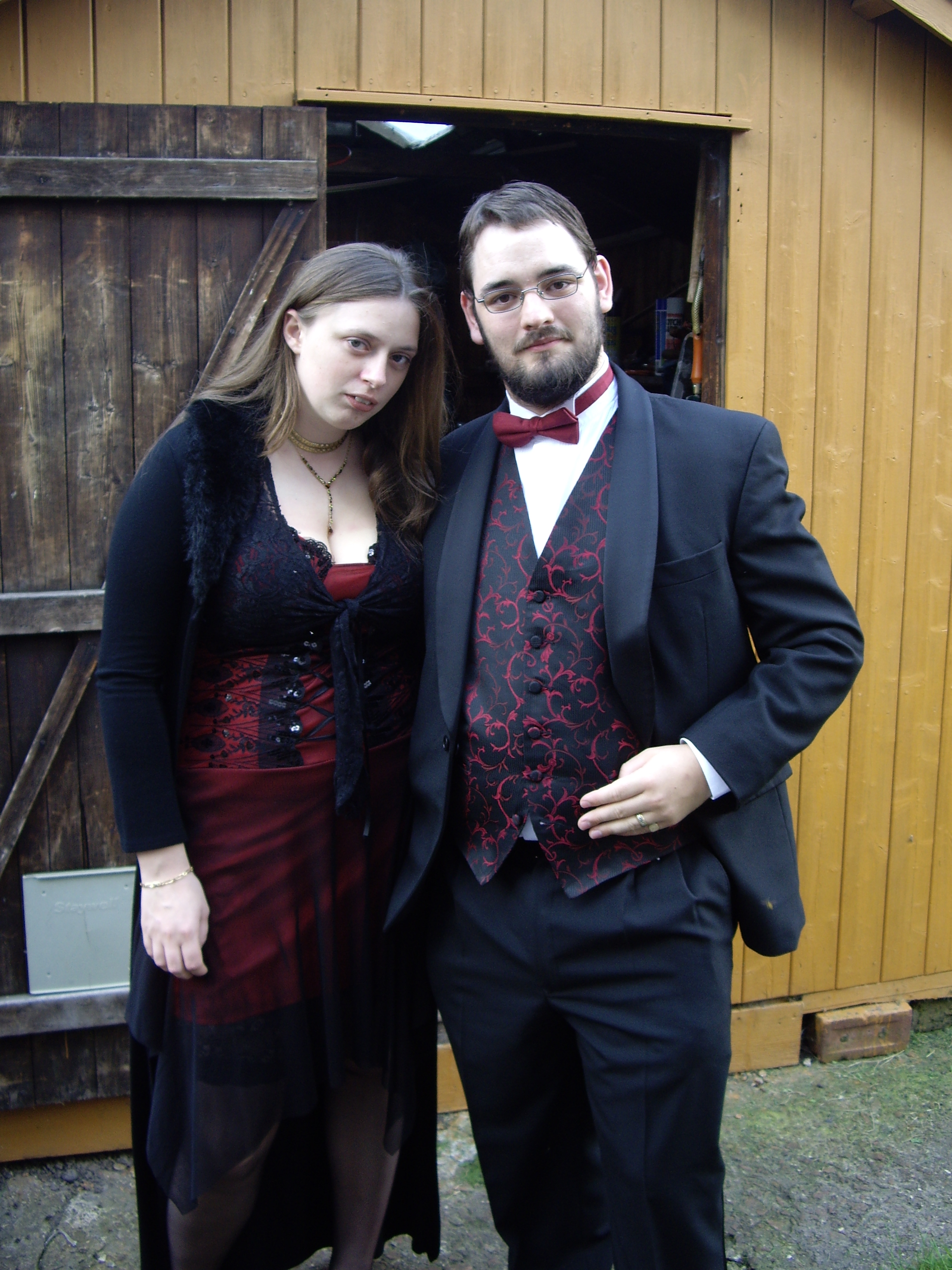 Claire, it must be said, looked absolutey fantastic, and I’m left wondering why she doesn’t wear a dress more often. But that’s not to say that everybody else didn’t look great, of course: JTA wore what is perhaps the single most beautiful waistcoat I’ve ever seen. Matt R was only a violin case away from looking like a Sicilian gangster, so sharp and dark was his suit and hat. Ruth’s marvellously sexy dress should have featured in more photos than she ever allows people to take. And so on, and so on…

I remember Matt R’s first comment when he saw Claire in her dress: “Are you wearing a corset under that?” he asked. She shook head. “No, I said: she’s actually that shape.” I’m a lucky, lucky man.

I’ll be writing more about QParty and about the event itself in a second post.

What an excellent cache container! I immediately spotted it but then disregarded it when I couldn’t see an obvious ingress.…

During the worst of my fretting about QParty this weekend, I thought that what might be best to calm me…

The Earthlings celebrate Burns Night in their own special way, with readings of the worst fan fiction they could find…