This post was removed shortly after its publication after a misunderstanding by the sender of the card lead to anger from their side of the family. I tried to pacify them, acceding to their every request (explaining my thinking, sending an apology, removing this post, and eventually removing the comments they’d published to the post) but they nontheless cut off contact with me and I haven’t heard from any of them since. They also cancelled their plans to attend QParty. Ten years later, I’ve restored the post: I’m not willing to censor myself on behalf of somebody who refuses to talk to me for a decade even when I do exactly as they ask. See: all censored posts.

Sometimes my brain runs a little too fast for itself and comes up with explanations for things that are deeper than what is most likely the truth. For example, Claire and I received in the post this morning a card. 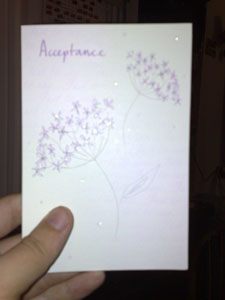 The card’s purpose is to accept our invitation to QParty, which starts in… eek… 520 hours! It’s a “thank you for inviting us, we’re coming” card.

But up until now, every card I’ve seen of this type has said “thank you,” on the front. This is the first one I’ve ever seen that says, simply, “Acceptance.”

And so my brain runs away without me: why “acceptance?” Is there a hidden meaning here – is the sender subtly saying that they don’t fully approve of QParty (perhaps they were holding out on a wedding), but that they have come to accept that this is what was invariably going to happen with me? And even if it wasn’t intentional, perhaps that’s a subliminal message; perhaps that’s what the sender was thinking when this card – this particular card – caught their eye in Paperway or The Post Office or wherever it originated from.

On the inside, there’s a space to write what it is that they’re accepting an invitation to, and rather than writing QParty, the sender has written “Bit of a Do.” What does that mean? Why would they re-title it in their own words? Is “a bit of a do” more or less significant than whatever (by this point I’ve convinced myself) they’re comparing it to: no doubt a more conventional engagement and marriage.

And by this point, my brain just starts itching to try to do something that they wouldn’t be able to accept, like turning up to QParty in drag with a harem of partners in tow.

Then I realise that I’ve run offon a tangent. Of course this isn’t what the sender (who you’ll notice I’m not naming – I’m at risk of offending them enough as it is and for that I apologise) means. They’ve very kindly replied by post to our invitation with a beautiful card and a kind message. They genuinely care for our happiness and respect our choices, and they’re delighted to share in this celebration of Claire and I’s love. Everything is fine.

Edit – 19 September 2017: After spending most of its life offline after a knee-jerk reaction by family members who haven’t spoken to me in the intervening decade, this post has been restored to the Internet.

14 replies to Sometimes I Read Too Much Into Things

During the worst of my fretting about QParty this weekend, I thought that what might be best to calm me…

Meatloaf, QParty, And The Competition

It’s been a busy weekend. Friday saw me travelling by train to Preston, with Faye, my honorary girlfriend for the…

I’ve Been Q’ing For A Year Now

Post Offices, eh? But those aside, it’s now been a year since Claire and I changed our surnames to the…

The motorists have a game here in Napoli. The aim is, over the course of your journey, to (justifiably) sound…