So, what have I been up to this weekend, you ask. Well…

On Friday I took the train up to Preston. The train I was on broke down at Machynlleth when they linked it up to the carriages that had come down the Pwllheli line, and the repairs set me back by almost an hour, but it turns out that the rest of the rail network was running behind schedule that day, too, and so I didn’t miss any important connections. I arrived in time for a quick “birthday tea” with my family (for my dad’s birthday) before rushing off to the Waterstones for the launch party for my friend Faye‘s first published novel, Cover The Mirrors. 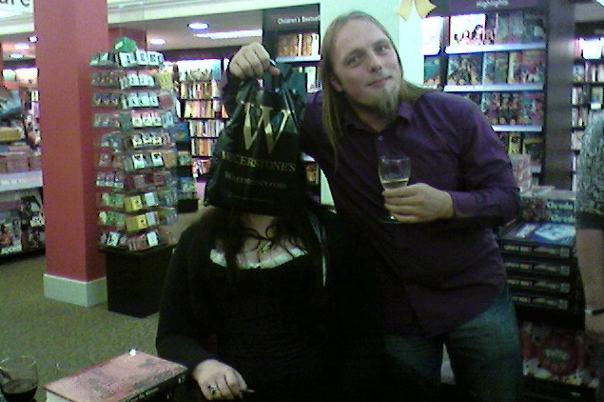 I drank as much wine as the store were willing to give me and bought myself a signed copy of the book. I even managed to get the photo, above, under the proviso that it’s only allowed to appear on the internet thanks to the fact that I’m holding a carrier bag in front of Faye’s face (she’s more than a little camera-shy). I haven’t started reading Cover The Mirrors yet, because I’m virtually at the end of The Night Watch by Sergei Lukyanenko, and I’d like to finish that first, but little doubt you’ll hear about it here in due course.

After the book launch, my sisters and I took my dad out for a few drinks to celebrate his 51st birthday. It turns out that, in my absence, Preston’s nightclub scene has really taken off. We started out in an 80s-themed bar which is part of a chain called Reflex. It’s so 80s it’s unreal: all 80s hits playing, David Hasselhoff and Mr. T decorating every wall, glitter balls and spots and mirrors everywhere… deely-boppers available at the bar… and so on. Really quite a fantastic theme venue. Then, under my sister Sarah’s recommendation, we tootled up the street and into a cafe/club called Manyana, where my dad got hit on by somebody young enough to be his daughter. 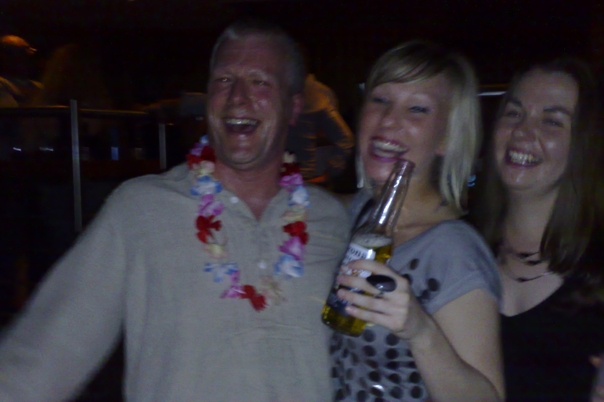 I snatched this picture. I’ve no idea who she is – we didn’t get her name – but she seemed genuinely surprised to hear my dad’s age. So I had the DJ announce it, just to make sure there was no doubt in anybody’s mind that there was an old person on the dancefloor.

This influx of Preston nightclubs is making them all remarkably competitive with their drinks prices, too. I bought a few rounds for the four of us and none of them ever came to over a tenner, and one – thanks to the “buy one get one free” policy at Manyana – came to under £6, which is quite remarkable for a city nightclub on a Friday night for four people!

On Saturday I had brunch with my sister Becky, my mum, and her boyfriend and then got back onto the trains to head back to Aberystwyth. Owing to line maintenance, the stretch of track between Crewe and Preston is unusable every weekend within sight, and so I was re-directed via Manchester Piccadilly. Yet again, my train ran late, and I found myself sprinting across Piccadilly station, trying to find a train that was heading Shrewsbury-way…

…meanwhile, my friend Katie, having slept through her stop, woke up in Manchester Piccadilly and, not quite awake, clambered off her train in an attempt to find a connection. I’d apparently featured in her dream, and so she was quite surprised (and not quite sure if she was seeing things) when I sprinted past her. She sent a text (which I chose to ignore: my pocket beeped but I was too busy looking for a train to take the time to get my phone out) and then phoned me before she was able to confirm that yes, it really was me.

As we were headed the same way, she joined me on my train for one stop, which was a nice surprise for what was a long and overcomplicated train journey. A few folks have suggested that this might not be a coincidence, and that she might be stalking me, but I’m yet to be convinced.

In any case, I don’t have a picture to go with this part of the story. Sorry.

YATN. If you were there, you know how it went. Big thanks to Jimmy and Beth for coming along.

In case you’ve not been anywhere that I can pounce on you and go “squee!” recently, here’s what you missed out on. You’ll remember that last week I mentioned that Poultrygeist – Troma‘s new movie – was coming to Aberystwyth. Well, it did. And it rocked…

…and better yet, Ruth, Claire, JTA, Paul and I got to hang out with Lloyd Kaufman, president of Troma Studios and producer of The Toxic Avenger, for a couple of pints and to share a bowl of nachos. The guy’s fabulously chatty and friendly, and if it weren’t for the awestruck feeling of “wow, we’re just sat here chatting with Lloyd Kaufman in Lord Beechings” we’d have probably been more interesting company. 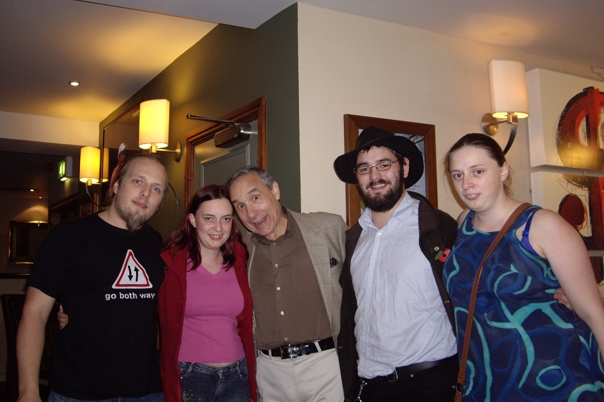 When he said goodbye, kissing the cheeks of each of the girls, I genuinely thought that they were in danger of exploding with excitement. Thankfully they didn’t, because I’d already bought them tickets to see Poultrygeist later on.

Which was, as I’ve said before, fantastic. It’s even better seen with a nice, energised audience, and better still when the director and several other people who worked on the film are hanging around afterwards to answer questions, chat, autograph things and so on. There are apparently 15 prints of Poultrygeist and the capacity to make more on demand, so if you want to see it and can’t wait for the DVD release, go speak to your local cinema now and ask if they’ll show Poultrygeist, even if only for a week (as Lloyd himself said, it’s better than showing Transformers on all 24 screens of some soulless megaplex). And hell, with Troma’s current financial situation, they could probably do with a helping hand with getting into as many projection booths as possible!

The title of this post – Quickly, Before They Turn The Glass Into Lesbians! – is a reference to one of my favourite lines in the film.

Paul might have bitten off more than he can chew, though, as he hinted on his blog. After some discussion with Lloyd, Paul is likely to be responsible for:

I’ll leave it to him to go into detail, if he wishes.

Between places, we also joined a growing crowd at the foot of Matt‘s bed in Bronglais Hospital. His operation was a success, but he’s reacted unusually to the general anaesthetic and they’re likely to keep him in for observation for another few days. If you haven’t had a chance to visit him already, he’d probably appreciate the company (although Sarah seems to have barely left his side): visiting hours are 3pm-5pm, 6pm-8pm: just ask if you need to know what ward he’s in and how to get there. If you’re feeling particularly cruel, mock him by talking about how well your bodily excretions are working, or swap his drip with his catheter bag while he’s not looking.

But seriously: I’m sure we all wish him well.

Finally – as if we weren’t full enough from a large Sunday lunch – after leaving the cinema, Gareth, Penny, Amy, , Rory, Paul, Claire and I slipped down for a late-night curry at the Spice of Bengal. Which was delicious, although there was a little much food for those of us who were already quite full. 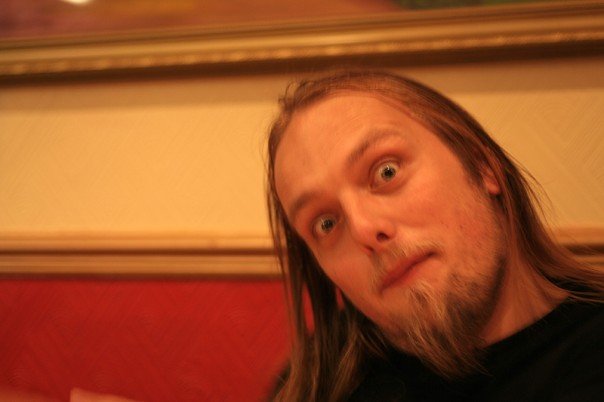 Nonetheless, a fantastic end to a fantastic weekend! I’m sure everybody else will have a different story to tell (Paul spent longer with Lloyd and went to more films; Claire and Jimmy got horribly drunk together on Friday night after she, Ruth and JTA failed to see a Meatloaf concert; Matt’ll have his own morphine-fuelled tale to spin, and so on), because it’s been a rich, full couple of days for many of us abnibbers.

Cool And Interesting Thing Of The Day To Do At The University Of Wales, Aberystwyth, #32:

Go on a tour of the lesser-spotted pubs. End up in a club. Finish drinking at 1am. Still have a hangover twelve hours later. Still have a headache twenty hours later. Realise to your horror that there are a lot of ‘black spots’ in your mind about that night. Realise with even more shock, the following afternoon, that, with alcohol still streaming round your viens, a lecture with John Basterfield is actually interesting. Wonder if this is normal.