At long last, my DS-Xtreme arrived today: I originally ordered it quite some time ago after it looked like it was likely to be released before the equally cool-sounding NinjaCard, but the releases of both have been delayed for an extended period.

The DS-Xtreme is a combined media loader, music player, and passcard for the Nintendo DS and DS Lite. Put simply, this means that it can load applications (for example, homebrew – programs developed by geeky Nintendo fans – and game backups – because nobody likes carrying around a dozen cartridges with them wherever they go), play music (converting your DS into an MP3 player) and, as a big selling point, integrates a PassMe solution for getting around the copy-protection problems that can otherwise trouble people trying to do these things with their new toy.

Most impressively, the DS-Xtreme is the first media loader for the Nintendo DS to fit into the regular “Nintendo DS” slot at the top of the device, rather than sitting rather clumsily in the “Game Boy Advance” port at the bottom. This removes the need to trick the device into running, for example, DS code from the GBA slot, which is usually accomplished by “patching” software backups. 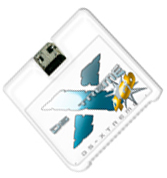 The packaging itself confused me, first. I opened it and my heart sank as it looked, at first glance, like there was only a USB cable in the box. Where was my cartridge? It later turned out that the cartridge is inset into it’s own little protective cardboard bubble at the bottom, and it’s a great demonstration of quite how small this device is that I couldn’t see it at first glance! This thing is really small – exactly the size of a normal DS game, so it fits into your DS or DS Lite without protuding out of the top at all: just beautiful. It only comes in white, which is a pity, because it’d look even more beautiful against a black “Euro” DS Lite if it were set in black plastic, but that’d be purely icing on the cake.

The port in the top of the cartridge, which can even be used when the device is plugged-in to your DS, is a standard “mini-USB” port. You don’t have to use the device while it’s connected to your console, of course, andyou could just use it as a 512Mb pendrive if you really wanted. But what really makes this thing special isn’t it’s storage capacity. I drag-dropped a few game backups, software toys and music files over to it (it mounted itself just like any other pendrive, no drivers or software to install) – the two tiny tricolour LEDs on the back of it flickered to let me know it was working – and popped it into my DS. Contrary to my fears, the integrated mini-USB port is sturdy and well-attached.
My DS’s firmware is already flashed using FlashMe, but this isn’t even slightly necessary. I turned on my DS and it booted to the usual screen: the top slot registered as containing a “DS-X”. Running this, I was soon presented with the beautiful DS-X menu system. It’s entirely touch-screen operated and very slick looking, with animations between screens and full-colour prettiness. The touch screen interface is a little sluggish, and it seems to take a few milliseconds longer than it should to do anything, but it certainly gets the job done. Plus, the entire UI is defined in XML files, and apparently it’s really customisable, so I might have a go at that.

The music player plays MP3s and even Ogg Vorbis, although I’ve been advised that the latter are only supported up to a certain bitrate after which the tiny DS processor panics and starts stuttering. Nonetheless, it has all the features you’d expect in a touch-screen MP3 player, and if you don’t like it, you can always install Moonshell or something. Oh, and the little LEDs? They pulsate through different colours in time with the beat. For real.
The applications list rocks. It really does – the cartridge even goes so far as to load the icons for the games from the ROM, so if you’ve got game backups on there you can quickly identify them from their piccies. I tried some of the coolest DS homebrew on it (DSOrganise, DSDoom, and a couple of others) and everything worked fine: I was particularly impressed that I didn’t even have to switch DSOrganise version to accomodate for a different filesystem or anything. I also had a go at a few backup ROMs: Mario Hoops 3-on-3, Mario vs. Donkey Kong 2, and Star Fox Command. Everything ran smoothly, the savegame EEPROM write time was very acceptable (and the savegames are stored seperately on the card so you can backup/copy/trade/hack/whatever them easily), and I didn’t have to do any creepy ROM patching. Wonderful.

Highly recommended if you want a really easy-to-use (just works!) media launcher for the DS without any invasive surgery or sneaky hacks. The only downsides are the slightly sluggish interface (but hey, it actually uses the touchscreen) and the fact that because it uses the DS port, you’ll probably need extra hardware if you actually want to perform game backups from genuine ROMs.

Feel like taking part in a sponsored masturbatathon? The internet remains a strange and wonderful place, as this form [PDF]…

And Here’s The Weather

Just wanted to be the first to get a picture online of it snowing in Aber this morning. It started…

This repost was published in hindsight, on 11 March 2019. Ruth wrote: Yesterday morning I finally got around to going…