It is hard to imagine a time when Albert Einstein’s name was not recognised around the world.

But even after he finished his theory of relativity in 1915, he was nearly unknown outside Germany – until British astronomer Arthur Stanley Eddington became involved.

Einstein’s ideas were trapped by the blockades of the Great War, and even more by the vicious nationalism that made “enemy” science unwelcome in the UK.

But Einstein, a socialist, and Eddington, a Quaker, both believed that science should transcend the divisions of the war.

It was their partnership that allowed relativity to leap the trenches and make Einstein one of the most famous people on the globe.

I hadn’t heard this story before, and it’s well-worth a read.

The group is considering dropping God from its meetings guidance. This is the new religiosity, says the Guardian columnist Simon Jenkins

The Quakers are clearly on to something. At their annual get-together this weekend they are reportedly thinking of dropping God from their “guidance to meetings”. The reason, said one of them, is because the term “makes some Quakers feel uncomfortable”. Atheists, according to a Birmingham University academic, comprise a rising 14% of professed Quakers, while a full 43% felt “unable to profess a belief in God”. They come to meetings for fellowship, rather than for higher guidance. The meeting will also consider transgenderism, same-sex marriage, climate change and social media. Religion is a tiring business.

I am not a Quaker or religious, but I have been to Quaker meetings, usually marriages or funerals, and found them deeply moving. The absence of ritual, the emphasis on silence and thought and the witness of “friends” seemed starkly modernist. Meeting houses can be beautiful spaces. The loveliest I know dates from 1700 and is lost in deep woods near Meifod, Powys. It is a place of the purest serenity, miles from any road and with only birdsong to blend with inner reflection.

The Quakers’ lack of ceremony and liturgical clutter gives them a point from which to view the no man’s land between faith and non-faith that is the “new religiosity”. A dwindling 40% of Britons claim to believe in some form of God, while a third say they are atheists. But that leaves over a quarter in a state of vaguely agnostic “spirituality”. Likewise, while well over half of Americans believe in the biblical God, nearly all believe in “a higher power or spiritual force”.

What these words mean is now the subject of intense debate… 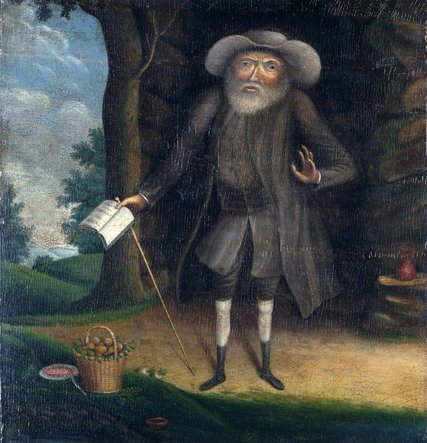 It was September 1738, and Benjamin Lay had walked 20 miles, subsisting on “acorns and peaches,” to reach the Quakers’ Philadelphia Yearly Meeting. Beneath his overcoat he wore a military uniform and a sword — both anathema to Quaker teachings. He also carried a hollowed-out book with a secret compartment, into which he had tucked a tied-off animal bladder filled with bright red pokeberry juice.

When it was Lay’s turn to speak, he rose to address the Quakers, many of whom had grown rich and bought African slaves. He was a dwarf, barely four feet tall, but from his small body came a thunderous voice. God, he intoned, respects all people equally, be they rich or poor, man or woman, white or black.

Throwing his overcoat aside, he spoke his prophecy: “Thus shall God shed the blood of those persons who enslave their fellow creatures.” He raised the book above his head and plunged the sword through it. As the “blood” gushed down his arm, several members of the congregation swooned. He then splattered it on the heads and bodies of the slave keepers. His message was clear: Anyone who failed to heed his call must expect death — of body and soul.

Lay did not resist when his fellow Quakers threw him out of the building. He knew he would be disowned by his beloved community for his performance, but he had made his point. As long as Quakers owned slaves, he would use his body and his words to disrupt their hypocritical routines…

It was the faith of two US presidents and several prominent UK industrialists, yet the origins of the Quaker religion are little known today by people living in the English town where it began. However, a new heritage trail targeting the American tourist market is aiming to change that.

In 1647, George Fox, a cobbler, was walking past a church in the East Midlands when he received what he described as a message from God.

The son of a Leicestershire church warden, he had spent years wandering around an England torn apart by civil war and increasingly disaffected with the establishment church.

The vision of Christianity he received outside the church in Mansfield, Nottinghamshire, was deeply radical – God was within everyone and there was no need for priests.

Within a few years, he was preaching to large crowds – and provoking the persecution of the authorities who felt threatened by his anti-priesthood agenda.

“He was fed up with preachers and professionals setting standards, leaving out the poorest people,” said Ralph Holt, a historian.

“He couldn’t see how someone could go to college and get a certificate and come back somewhere between this land and God.”

A memorial recognising the wartime work done by Quakers has been unveiled at the National Memorial Arboretum in Staffordshire.

Quaker beliefs, among them pacifism, meant that many were unable to serve in the armed forces during wartime.

Many volunteered to serve in warzones in the Friends Ambulance Unit (FAU).

Leslie Steed, 94, from Birmingham, who served with the FAU during World War II, said: “I would rather have been killed than kill somebody.”

Last week, I was invited to a barbeque with Oxford’s Young Friends. Despite being neither a Friend (in their “capital-F” meaning of the word: a Quaker) nor young (at least; not so young as I was, whatever that means), I went along and showed off my barbecue skills. It also gave me an excuse to make use of my Firestick – a contemporary tinderbox – to generally feel butch and manly, perhaps in an effort to compensate for the other week.

Anyway: this is how I discovered halloumi and mushroom skewers. Which may now have become my favourite barbeque foodstuff. Wow. Maybe it’s just the lack of mushrooms in my diet (we operate a cooking rota on Earth, but Paul doesn’t like mushrooms so I usually only get them when he or I happen to be eating elsewhere), but these things are just about the most delicious thing that you can pull off hot coals.

Aside from meat, of course.

Update: we just had some at the Three Rings Code Week, and they were almost as delicious once again, despite being hampered by a biting wind, frozen mushrooms, and a dodgy barbeque.