It’s been a busy weekend. Aside from all the usual stuff, Claire, Beth, Jimmy, Rory, Gareth, Penny and I travelled down to Oakwood (where we met up with Andy and Sian) for a round of play at the last remaining Crystal Maze Cyberdrome and a visit to Oakwood Theme Park. I’ve uploaded some pictures to Abnib Gallery: Oakwood, and if you’ve got any photos that you took while you were there, I’d appreciate it if you’d give me copies there too! (on which note: there are people who haven’t yet uploaded their photos to the 99 Red Balloons gallery: shame on you!)

Wow; that was a link-heavy paragraph.

We started at The Crystal Maze, registering ourselves as two teams, with Beth, Sian, Rory, Penny and I in the first team (Team Moo!) and Claire, Jimmy, Gareth and Andy in the other (Team Awesome!). Each team was issued with a plastic “swipe card” which can be swiped through any of the little card readers hidden around the themed zones of the maze, causing clues to appear on a nearby screen about where you need to go to play your next game, or checking you in to a game that you’re due to play.

The games range from the cheesy to the clever. Some are computer game-style remakes of genuine Crystal Maze games (using a trackball to drag-and-drop cogs onto pegs). Some provide clever theming and interactivity for multiple players (with one, for example, climbing up a ladder to move a computerised blowpipe, and others able to see on a separate screen which targets need to be hit). Some even involve physical activity (hopping on numbered stepping stones as your team solve riddles, swinging over a chasm to press buttons, or wriggling between a maze of hanging poles without touching any). It’s a great deal of fun, although it runs on genuinely ancient technology – an IPX network of DOS 386SX computers, each with 2MB of RAM, talking to a central server – although it’s well-built: when the machines (finally) rebooted they let us carry on exactly where we left off. Our team managed to crash two of them, causing them to completely lock up, which slowed us down in our race for crystals: we ended up with 30 seconds less in the crystal dome than our opponents, and I feel that this alone is to blame for us getting a handful less gold credits than them at the end. That and Beth had never seen The Crystal Maze before (can you believe it!) – that has to count for something. 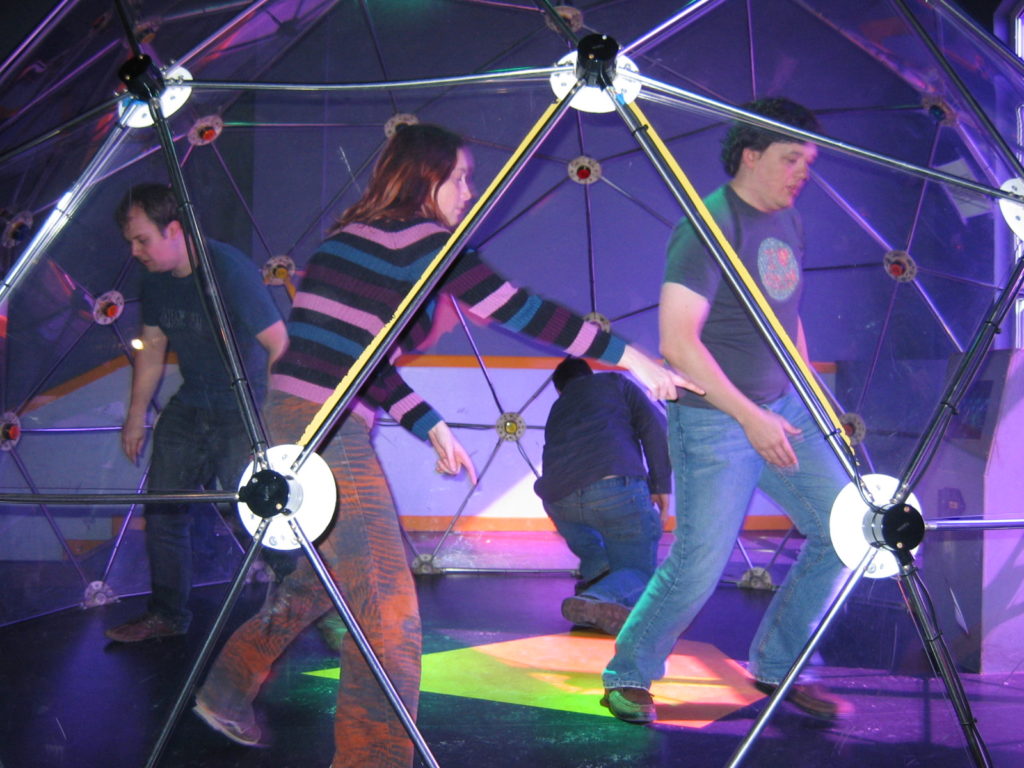 The dome itself is about the size of a medium-to-large family tent, and is more like just the top half of the real dome in it’s shape. Around the walls illuminated buttons flicker on and off, and the aim is to press them when they are on and not when they are off. Occasionally, all the lights will turn off, and the players have to find the two small illuminated buttons near the floor and press them simultaneously to make the game continue, which provides some variety. It’s a great, furious, leap-around end to the activity, and it – like the rest of the experience – was a lot more fun than I expected. Certificates in hand, we made a move 200 yards up the road to Oakwood Theme Park. The park is small and economical, as theme parks go, but it’s size isn’t a huge disadvantage, as it means that there’s actually time to do everything you might want to (perhaps a few things twice) without running around or putting excessive effort into planning a careful route. We rode the miniature railway into the heart of the park, and, as everybody got their bearings, Penny, Gareth and I decided to ride Vertigo, a 135-foot tall skycoaster (i.e. a giant swing). A crane pulled up the harness (into which the three of us were strapped – like a giant sleeping bag with Gareth in the middle), and, after it reached the top, staff on the ground counted down… 3… 2… 1. I pulled the “ripcord”, a toggle by my right-hand side, and we dropped.

The first couple of seconds are a lot like parachuting, in my experience: a sudden shock of falling, followed by deceleration as the swing (or the parachute) begins to take effect. There’s the immediate shock of the rapidly-approaching and oh-so-near ground, but apart from that, it’s a very similar feeling. Then the swing begins, and there’s a sensation of moving very quickly and very close to the ground. We unlinked our arms and (perhaps with the exception of Penny, who gripped her harness tightly for some time) reached out in a Superman-like pose, and soared back up into the air. Elementary physics dictated that we’d swing almost as high again, but it still surprised me, and suddenly falling “backwards”, back towards my feet, was quite a remarkable change and only added to the buzz of the flight.

The rest of the park was good, too. Megafobia is a fast, aggressive wooden rollercoaster with a great deal of difference in the experience of sitting at the front or the back of the train. Speed (or, as we called it, The Phallus, owing to it’s unusual shape) is a fun little vertical-drop coaster with a loop and a barrel roll: it’s a little short, and the queue a little long (for some reason, they were only operating one of the four trains they had available) – it’s well-worth fighting for a place at the front, though, as the view is significantly better. The water slides (on which you ride a plastic boat that skims like a stone across water), the Treetops mini-coaster, “The Bounce,” and the pirate ship all add to the “thrill rides” selection of the park, which had always previously seemed to me to be a bit “too kiddy.” Even the pedal boats were fun, after a fashion – assuming you ignore the pain Jimmy and I had of repeatedly pumping your knees into your chest in a too-small, too-hard seat, right after a cheeseburger lunch. And then there’s Hydro. It only opened in the afternoon, which was a pity, because we could have been using that time to dry out… Hydro is the wettest “wet ride” I’ve ever been on. They really are not kidding when they warn you to leave behind your water-damagable valuables at the station. A 100-foot drop in a wide boat right into a splash pool kicks up an enormous wave that does an excellent job of soaking every single person on the boat. As if the experience of the ride weren’t enough, we then took the time to stand on the bridge over the spash pool, bracing ourselves against the railing, to “catch the wave” – a blast of foam that pours across the bridge every time the ride goes around.

So: a good day out was had by all, I feel. Please do upload your pictures from the day, because I’d love to see them. I gather Rory might be making another one of his short DVDs: if so, we’ll show it at the beginning of next week’s Troma Night.

On 27 April 2007 some friends and I went to the (last surviving) Crystal Maze Cyberdrome Experience at Oakwood Theme Park. Here, some of my friends can be seen playing the Crystal Dome game. See more photos here.