I’m 100% behind the #covid19 strategy @BorisJohnson proposes in his latest letter. But then, I’ve already had my birthday this year…

Ah, it’s that time of year again. Here’s a quick round-up of some of my favourite pranks on the web this April Fools’ Day:

Have a great April Fools Day! Play a prank on somebody for me. And, if you don’t want to get caught out yourself, why not install the Do Not Fool add-on for Firefox, which passes a Do-Not-Fool header to every web site you visit, requesting that the site does not display to you any prank content but only genuine pages.

After JTA and I’s monster plan for a great April Fools’ joke got rained-off this year (maybe another year), I just had to go ahead with two smaller April Fools’ gags this year.

A nice simple joke at the expense of the people in the office building I work in (and far less complex than last year’s prank against the same): I found a document online, printed it out, and stuck it to the photocopiers.

It instructs users that the photocopier has been upgraded with voice controls, so you can just “tell it” to copy, collate, staple etc. and it’ll follow your instructions. The document goes on to explain that it’s in “learning mode” right now and it might not get everything right while it learns your voice, so be patient and take the time to repeat yourself slowly and carefully.

I haven’t got eyes on the copier, so I’ve no idea how many – if any – people it caught.

For the last few years, I’ve run two a text-message based mailing lists (I’ve got unlimited texts as part of my mobile contract, so it’s as-good-as free for me to do this). The first, Abnib Announce, lets people in Aber know about Troma Night, Geek Night, and similar events. The second, Joke of the Week, goes to a far wider audience and shares, every Friday, the best (by a loose and arguable definition of the word) of the jokes I’ve heard over the previous seven days.

This morning I sent out the following message to both lists:

Bad news, everyone. My network has been in touch to say that running these regular bulk SMS lists is a violation of their Fair Use agreement, so I can’t run them from my “free texts” package any more. The good news is they’ve offered an alternative. These lists will now become subscription-based SMS services. This will cost you no more than 15p per message received, and a maximum of £1 per week (so £2 per week if you’re on both lists). I’m supposed to ask for your permission before subscribing your number, but I know you’ll all agree anyway. If for some reason you DON’T want to continue receiving Joke of the Week or Abnib Announce at 15p per message, please text me back BEFORE the first message, this afternoon. Ta!

I’ve had a handful of great responses, so far, including:

Man, I love this day of the year.

I’ve always had a thing for big, overcomplicated April Fools’ gags. Traditionally, we’d always play pranks on Penbryn Halls at the University, but it’s not so easy these days to gain access to halls of residence, now that they’ve installed door locks that don’t open by themselves when you so much as breathe hard on them, so I thought it was time to broaden my sights.

I work for a company based in the Aberystwyth Technium on the marina. A few weeks ago, the Technium management had arranged for the installation of a new fence and automatic car park barriers, to allow the building to better control who has access to the offices’ car parking spaces (car parking spaces being a particularly valuable commodity in Aberystwyth). These barriers haven’t come online yet, but apparently they will “soon” (which is regional-government-speak for “someday, maybe”). 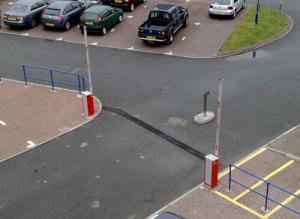 Early on the morning of 1st April, I put out an e-mail to all resident companies at the Technium, spoofed so that it appeared to come from Technium management and emulating their writing style and the way that they typically send out bulk messages to the tenants.

The key fobs for the new car park barrier system need to be ordered via an online application form . The application needs to be filled in as your key fobs will be uniquely linked to your vehicle.

The application form is only available online at http://www.techniumnetwork.info/aberystwyth/carparking/

Once you have applied, central office will send out the key fobs to us in a week or two. Please fill in the form as soon as possible so that the key fobs all arrive at the same time.

The techniumnetwork.info domain name is one that I’d picked up the day before for the best part of 49p on a special offer with a registrar – the real Technium website is at www.technium.co.uk, but I figured that people wouldn’t pay attention to the domain name: even the tenants here probably don’t spend much time, if any at all, on the Technium website. I stole the stylesheet and layout for the official website and adapted it to my purposes: there’s a mirror up now at http://techniumnetwork.scatmania.org/aberystwyth/carparking/ if you want to see for yourself. 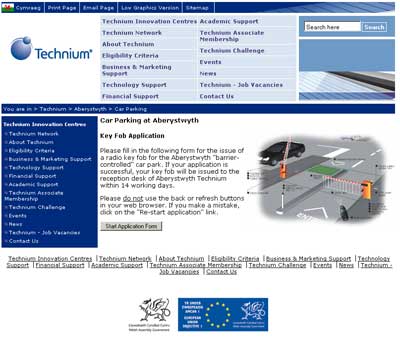 The site begins by looking like a genuine application form, asking for all of the key details – your personal and company information, basic details of your car – and slowly starts over many, many pages of forms to ask sillier and sillier questions. “What colour is your car?” is a drop-down with “Red” and “Other” as the only options. “What noise does your car make?” is accompanied by options like “Vroom!” and “Brum-brum.” Later questions ask whether or not your car is capable of transforming into a giant robot and challenge you to correctly identify road signs that have been altered in comedic ways.

The trick worked, and many of the tenants were fooled… some of them well-past the point at which they should have thought the form was genuine; and almost all of them believed, even when they realised that the form was a joke, that it had been set up by the Technium themselves. It was only when one tenant decided to pass a copy of the e-mail on to the real Sion Meredith that the building management heard anything about it, and, sadly, put a stop to it by sending out an e-mail to say that it was all a joke, and not one by them.

After he’d worked out it was me that was behind it… I’d taken steps to make it obvious to anybody who bothered to check up on it, so as to maximise the understanding that it was, in the end, just a joke: the last thing I wanted was some humourless bureaucrat to see this gag (which did, of course, involve feigning the identity of a government employee) as a terrorist threat or something …he got his own back, though. He came up to my office at a few minutes to midday to inform me that he’s had to pass on my details to the Technium legal team, and he managed to make my heart skip a beat before I realised that he, too, was just having a joke.

A selection of feedback so far on the gag after I sent out a “gotcha” e-mail to everybody affected:

I had to leave the room when it first started to catch Simon out: I heard him phoning his wife to ask for a reminder of their cars’ number plates and had to excuse myself so as not to give the game away with my girlish giggling.

So, that was all good, and far more successful than my backup plan which involved passing on missed call messages to co-workers to ask them to return a call to Rory Lyons at Captive Audience on 01244 380280. The number is actually the number for Chester Zoo: I so very nearly made some of the people I work with unwittingly call up Chester Zoo on the morning of April 1st and ask, “Can I speak to Rory Lyons, please?” It’s a good prank, anyway – I’ll save it for another time: or if you want to give it a go (it doesn’t even have to be April Fools’ Day, with a great joke like that), let me know how you get on!

…seems to be to not text me me Google Calendar alerts this morning. So I didn’t get reminded to put the bins out, which I’ve kind-of come to rely on. Whoops!

[this post has been partially damaged during a server failure on Sunday 11th July 2004, and it has been possible to recover only a part of it]

[further fragments were recovered on 13 October 2018]

Two fantastic bits of funny news for you this April Fool’s morning:

1. A seven-ton atomic landmine, designed to prevent Soviet advance through West Germany, would have been kept warm while underground by being filled with live chickens (with enough food to keep them alive for a week). This (not an April Fool’s – really!) report brought to you by the BBC. Weird.

2. Do you remember a couple of years ago when somebody wrote ttyQuake, a front-end for iD‘s groundbreaking game, Quake, which replaced the graphics with live-generated ASCII-art [screenshot]? Well; somebody’s gone one step further: IF Quake. IF Quake is an Inform program that acts an an interface between your Z-Machine Interpreter and the Quake data files. What does this mean? It means that it’s a text-based-adventure version of Quake. So instead of wiggling your mouse and…