I don’t visit Facebook often. In fact, I usually only log on once or twice a month to clear out the billions of requests to install applications (and block those applications) that people don’t seem to have noticed that I never accept, or to check up on a mis-placed phone number or e-mail address for some infrequently-contacted friend. But in any case, I’m not up-to-date with what’s commonplace on Facebook any more. But this unusual bulge in my list of friends amused me for a moment: 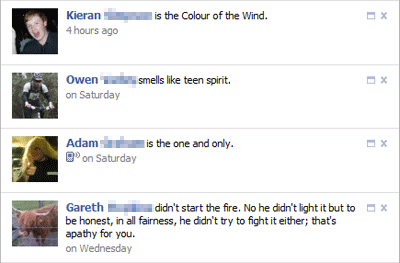 That’s four friends, in a row, who all set their “statuses” to something resembling the lyrics of a well-known song. Kieran may well be the colour of the wind, of course, but he’s still a ginger. I’m not in a position to comment on Owen’s body odour, and I’m doubtful that Adam is the one and only (although it’s genuinely possbile that there’s nobody he’s rather be). And Gareth’s apathy is… well, pretty much standard.

But it doesn’t seem so regular that a block of people adjacent to one another on my seemingly-randomly-sorted (I assume there’s some kind of clever hashing going on at the back-end for speed, or something) would all independently (none of them know one another, to the best of my knowledge) choose to have their statuses inspired by songs. Nobody else on my friends list is demonstrating this.

Perhaps I’m seeing patterns where they don’t exist, like seeing the face of Jesus in a balding dog’s back, or something. Just thought I’d share. 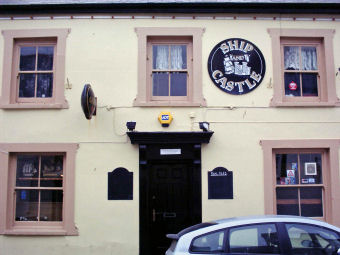 It’s been a busy week or so. Last Wednesday I went out to the first night of the Ship & Castle‘s real ale festival with Penny and Ele, on account of the fact that (a) Yay! Dozens of cask-conditioned beers! and (b) I hadn’t seen much of either of them for an aeon or two. The pub was completely packed, but that didn’t stop us from sampling a good selection of the beers and ciders on offer. Once one became available, I stole a stool to sit on.

Now it seems that some strange wizard must have enchanted that stool on some previous visit to the pub, with a mysterious spell of popularity, because it suddenly appeared that every fucker in the pub wanted to talk to me. The folks I knew (one or two more turned up), the folks I barely knew (“I’m sorry, but I can’t remember how I’m supposed to know you?” territory)… even strangers seemed to know who I was or, failing that, want to. Two people said “hey, you’re that guy with the blog,” as if that in some way cuts it down in this town (abnib disagrees). One woman waved as if I’d known her for years but I can’t place a name to her face. Another chap – his flirtatiousness outdone only by his drunkeness – almost coerced a blush out of me with a particularly charming compliment. And it just kept on going, and going…

When the pub finally kicked us out (and we’d added Lizzie to our party), we hunted for another pub but without success, and so we scooped up beer and wine and took the party to the living room of The Cottage, where we talked all kinds of bollocks, drinking and listening to music – and joined for awhile by Tom, who came in looking drunk and stained with ash, drank half a bottle of beer, urinated in the back yard, and left again – until it was getting close to 4am and I thought it really ought to be time for bed, considering my planned early start at work the following morning. How Penny survived (she started work even earlier) I haven’t a clue.

A major difference between being in your late twenties and being in your early twenties, in my experience, is not one of having less energy for a late night (or early morning) of drinking, but one of responsibility. As a 27-year-old, I’m quite aware that I can still survive an all-night party (although it’s getting harder!). But when somebody spontaneously suggests something like “Let’s stay up and party and watch the sun rise,” instead of saying “Yeah!” I say, “Hmm… I’ve got work in the morning… maybe…” It’s easy to be made aware of this distinction when you’re in a student town, as I am, and it’s easy to be made to feel even older than I am. On the other hand, it helps to give every opportunity to pretend I’m less aged than I actually am. 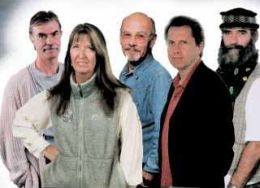 So then Thursday was the anticipated long day at work, followed by a quick dinner before a rush up to the Arts Centre to see Steeleye Span, on JTA‘s recommendation. Steeleye Span are a “proper” folk rock band: y’know, they’ve had every single member replaced at some point or another and still keep the same name, like Theseus’s ship, and they’ve written songs that they don’t play any more, but that other folk bands do. That kind of definition. They were pretty good – a reasonable selection of songs from the usual slightly saucy and sometimes unintelligble varieties that they’re known for, and a particularly strong finish to the concert with a rousing sing-along rendition of All Around My Hat (which, I later discovered, they played as an encore the last time my dad saw them, about a decade or more ago – I guess that’s the third characteristic of a “proper” folk rock band: that your parents have seen them perform, too).

By now, I was getting to a point where I was tired enough to not be making much sense any more when I talked (as if I ever do), and I slept well, although not for long, because I had to make an even earlier start at work on Friday morning to make sure I got everything I needed to get done done before travelling up North in the evening.

So yeah: Friday evening we travelled up to Preston and had pizza with my folks, and then on Saturday morning I found myself taking my sister Becky‘s place in the BT Swimathon. She’d been suffering from a lung infection for a week or more, now, and had to pull out, so – despite having barely swum at all for several years – I pulled on my trunks and a swimming cap and contributed 1750m to the team effort. And then dragged my body out of the pool just in time for Claire and I to rush off to Formby for her godmother’s funeral, which is what we’d actually come up to the North-West to do.

Oh yeah, and I got a medal, which I’ve been wearing ever since.

I can’t say much about Claire’s godmother’s funeral, because I only met her once, and then only briefly. Her husband – she’d been married for 52 years; they’d been teenage sweethearts – was quite obviously finding her death difficult, yet still managed to deliver a beautiful and moving eulogy for his dear departed wife. Apart from the religosity of the service (not to my taste, but I suppose it wasn’t really there for me anyway) it was very good, and the church building was packed – this was obviously a popular woman.

Her body seems to be going “on tour”: she’s having a second service – the actual funeral – in Norfolk today. I wonder if it’ll be as full. Not many people get two funerals. Perhaps the popularity will wane after the first. On the other hand, you might get groupies… seems to be what Claire’s doing, as she’s down in Norfolk now and presumably went to the second funeral, too.

Later, we found ourselves in Manchester. We’d hoped to go guitar-shopping (Claire’s looking for a new one), but ended up there just barely in time to eat some noodles and go to meet my family, and each of my sister’s boyfriends, at the Odeon IMAX cinema to see Shine A Light, the Rolling Stones concert film/documentary. The film was… better than I would have expected, and the resolution of the IMAX filmstock really showed during long pans and high-detail closeups on the band in concert, although I wasn’t particularly impressed with the editing: too many cuts, too much crossing the line, and (on a huge screen) almost nauseating thanks to the bumps and bounces the cameras made. It was also a little too-much concert and not-enough documentary, perhaps because the band have never really interviewed very well. In one old BBC clip, Keith Richards is asked what has brought the band it’s initial success, and he simply shrugs. In another – in the early 1970s – Mick Jagger‘s only answer about the band’s future is “I think we’ve got at least another year left.” 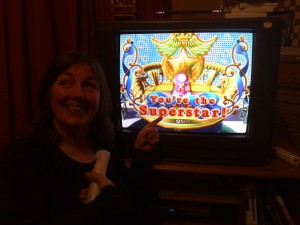 A few games of Mario Party 8 with my family later (one of which, amazingly, my mum won!), and we were back on the road. Claire dropped me off at Birmingham New Street station so I could catch a train back to Aberystwyth, as I needed to be back at work this morning, and she carried on to Norfolk to visit her dad and to attend the other half of her godmother’s funeral.

My journey back to Aberystywth was pretty horrendous. Trains are cancelled between Shrewsbury and Aber right now, and replaced with a bus service, and I’m not sure I’ve ever been on a less pleasant bus journey in my life. Five-seats wide, I was squished into falling half-off my uncomfortable seat even sat next to somebody as small as Matt P (who I’d happened to bump into on the journey). There was barely any knee-room, and the air conditioning only had two settings, neither of which was particually pleasant but for reasons of completely different extremes. 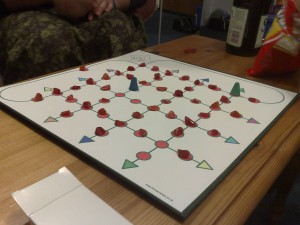 We finally got back to Aber just in time to join in at Geek Night, where Ruth, Penny, and Rory were just finishing a game of Carcassonne. JTA arrived, too, and the six of us played the largest game of Settlers of Catan I’ve ever played. We also managed to have a couple of games of Hypercube Hop, Ruth’s dad’s first board game published under his new Brane Games label. For those of you that missed it, I’m sure there’ll be an opportunity to give it a go at some future Geek Night.

Then today I posed for topless photos for Ele. But that’s another story and I’ve got to go and eat dinner so I’ll leave it at that.

Tonight’s Troma Night will be held at The Cottage. It’s the final Troma Night of the year, and it’ll be our least Christmassy of the “Christmas” Troma Nights ever, we suspect! Here’s the plan:

One more thing – as a small “thank you” to everybody who’s made Troma Night so fantastic this last year – and as a Christmas gift to our friends in general – Claire and I have decided to “buy a round”: we’ve racked up a sizable quantity of ales for tonight’s attendees to drink. So come along for some good films, bad films, pizza, and – just this once – you can get pissed on us. So to speak. Ahem.